Bees are impor­tant for the envi­ron­ment and for crop produc­tion. However, agri­cul­ture is often blamed for a decline in bee numbers. But there are several initia­tives in the agri­cul­tural sector to coun­teract the death of bees. We took a closer look at some of them.

The decline in bees is a sensi­tive issue, for which the agri­cul­tural sector is often blamed. However, diverse factors such as weather or the pres­ence of para­sites, which also influ­ence the well-being of plant polli­na­tors, are frequently over­looked. In fact, the agri­cul­tural sector has a growing number of tools at its disposal to do its part for the survival of its impor­tant little helpers. Across Europe projects are under way to face this very specific chal­lenge.

In the field of crop protec­tion, the direct, delayed, and combined effects of agri­cul­ture continue to be contro­ver­sial, both in public and in acad­emia. As long as tech­nolo­gies like RNA inter­fer­ence pesti­cides or the use of robots for weed control are still dreams of the future, there are oppor­tu­ni­ties to align cultivation measures during the flow­ering period with bees’ activity rhythms.

The foraging activity of bees depends on many factors including time of day/year, humidity, wind, or crop. Research is ongoing to better under­stand how these para­me­ters interact. At the same time, tech­nolo­gies are also being devel­oped to better under­stand and docu­ment the risks, such as connected beehives. 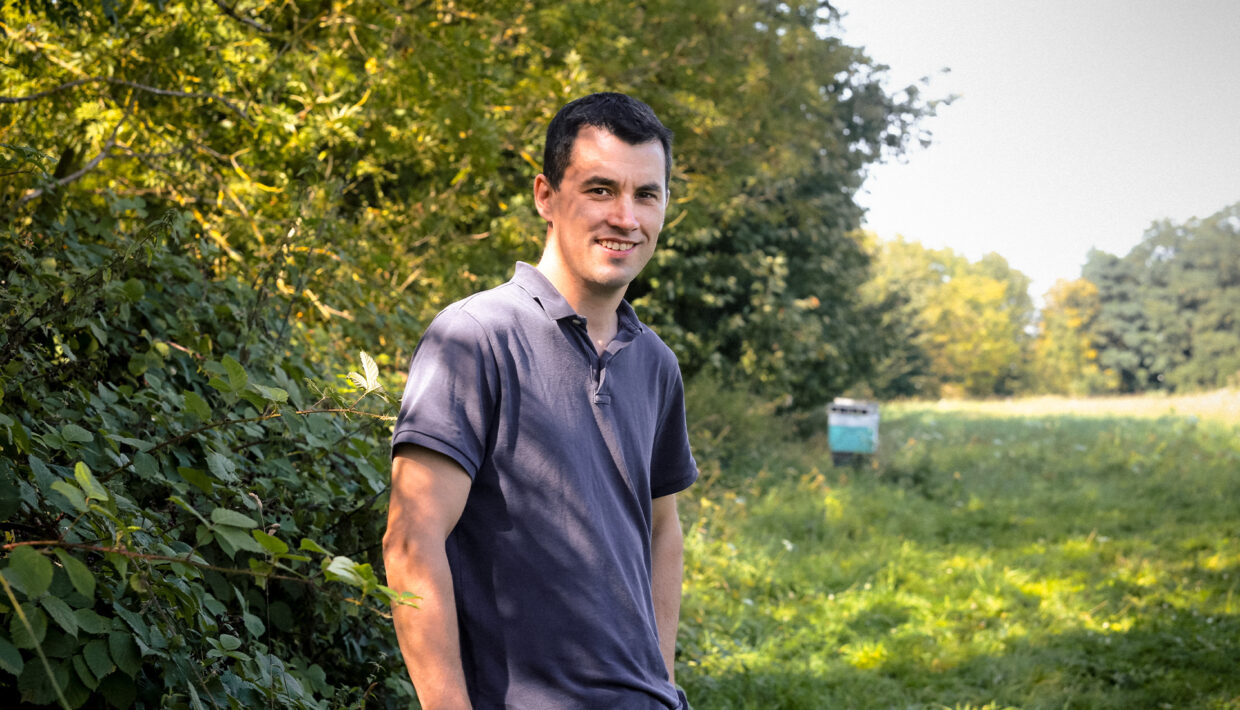 In France, Vincent Henne has imple­mented three such systems on his farm. “Moni­toring bees is a means of ensuring good prac­tices,” says the young farmer in Heudi­court, who grows wheat, sugar beet, flax, barley, oilseed rape and legumes on his 135-ha farm. The beehives are equipped with scales, directly connected to the farm’s computer, for studying bee colony dynamics.

The bees are located on the edge of a one-hectare strip of fallow land, between two rape­seed plots. The rainy year of 2021 did not seem favourable for their activity. “Never­the­less, the average weight of our beehives increased to 35kg. With the help of soft­ware which plots the weight measure­ment dynamics on a curve, we were able to verify that the bees were feeding correctly throughout the season.”

By the end of May pollen beetle had infested the crop and pesti­cide was applied in the early evening. By checking pest traps installed on the plots, and the weight of the hives, Mr Henne was reas­sured there had been no decline in his bee popu­la­tions. “I veri­fied that my prac­tices had no harmful effect on the bees’ activity.”

Moni­toring bees – above all else – is a means of ensuring good prac­tices.

A similar project was initi­ated in Île de France in 2019. “Our goal is to renew links between society and agri­cul­ture by explaining the real inter­ac­tions between agri­cul­ture and beekeeping, while promoting local honey produc­tion,” explains Elisa Despiney of the Depart­mental Feder­a­tion of Farmers’ Unions (FDSEA). Twenty computer-connected weigh-scales were installed, and this network of farmers and beekeepers continues to expand, recording honey flow data.

“We realised that major food sources for polli­nating insects are rape­seed and sunflower,” explains Nicolas Cerrutti, head of Func­tional Biodi­ver­sity Studies at the Terres Inovia Insti­tute, which supplied the computer-connected scales to Mr Henne. “In some arable regions, bees depend mainly on rape­seed at the start of the season.” Compar­isons were made between areas differing in the propor­tion of rape­seed grown. “We noticed in 2021 that the weight of the hives in areas with a higher share of rape­seed was signif­i­cantly higher.”

Numerous factors deter­mine bee health, including the weather and pres­ence of para­sites like the varroa mite or wax moth. The avail­ability and diver­sity of flow­ering plants is one of the most impor­tant factors which can be heavily influ­enced by agri­cul­tural prac­tice. Well-nour­ished bees are more stress resis­tant. 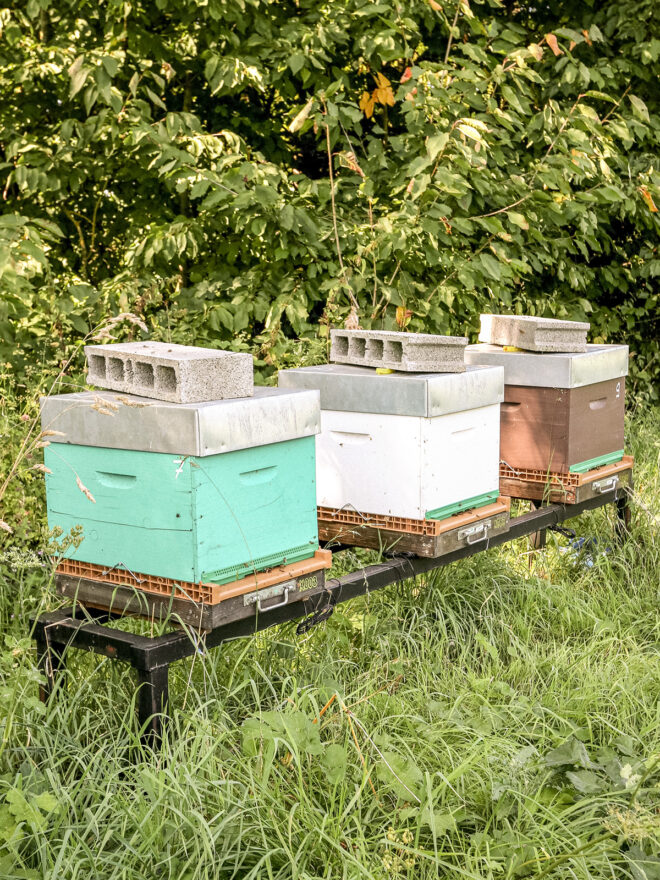 Connected beehives allow Vincent Henne to monitor the bees' activ­i­ties on his computer, via the “optibee” soft­ware. 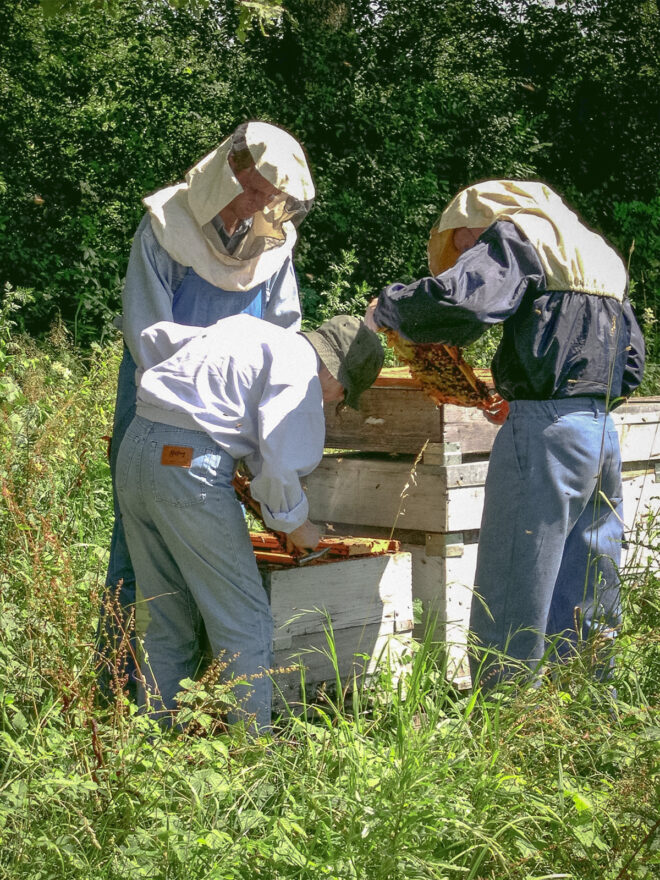 A beekeeper helps Vincent Henne to better under­stand bee health and to adapt his farming prac­tices.

When agri­cul­tural crops do not provide suffi­cient food for polli­na­tors, sowing mellif­erous (nectar producing) flowers close to arable fields can compen­sate for such deficits.In recent years, such initia­tives have become increas­ingly popular. In Sweden, the Rural Economy and Agri­cul­ture Society (SREAS) has devel­oped a programme to set up fallow land and flower areas, which has involved some 700 farmers. “This initia­tive comes from the agro sector itself, and not an oblig­a­tion imposed by the regu­la­tory author­i­ties, which is the project’s strong point,” says Mattias Hammarstedt, agron­o­mist and adviser to the regional office of SREAS, farming 145ha himself.

»Farmers can help solve many envi­ron­mental chal­lenges. We want to make the public under-stand that we really care.«

These are designed to attract different types of polli­na­tors, including bumble­bees, honey­bees, flies, butter­flies, etc, as well as to provide as the longest possible flow­ering period. “According to some studies, the declining bumblebee popu­la­tion is the most acute problem in Sweden,” says Mr Hammarstedt. “We need to consider the different species of bumble­bees, with short or long tongues, which need different types of flowers to be able to access the nectar.”

The initial idea was to create an unin­ter­rupted ecolog­ical corridor, a strategy which was subse­quently revised. The sown area stretches over 800km. “Research has shown that it is best to spread out the areas in strips, but also as areas with peren­nial fields that provide food and habitat. This is because bumble­bees fly only a few hundred metres from their hives,” he adds.

Another benefit is the posi­tive response from the public and media. “Besides the main objec­tive of increasing biodi­ver­sity and gener­ating food resources for polli­na­tors, this helps people under­stand that farmers are not the problem, but rather that we can contribute to the solu­tion of many envi­ron­mental chal­lenges. And that we really care.” 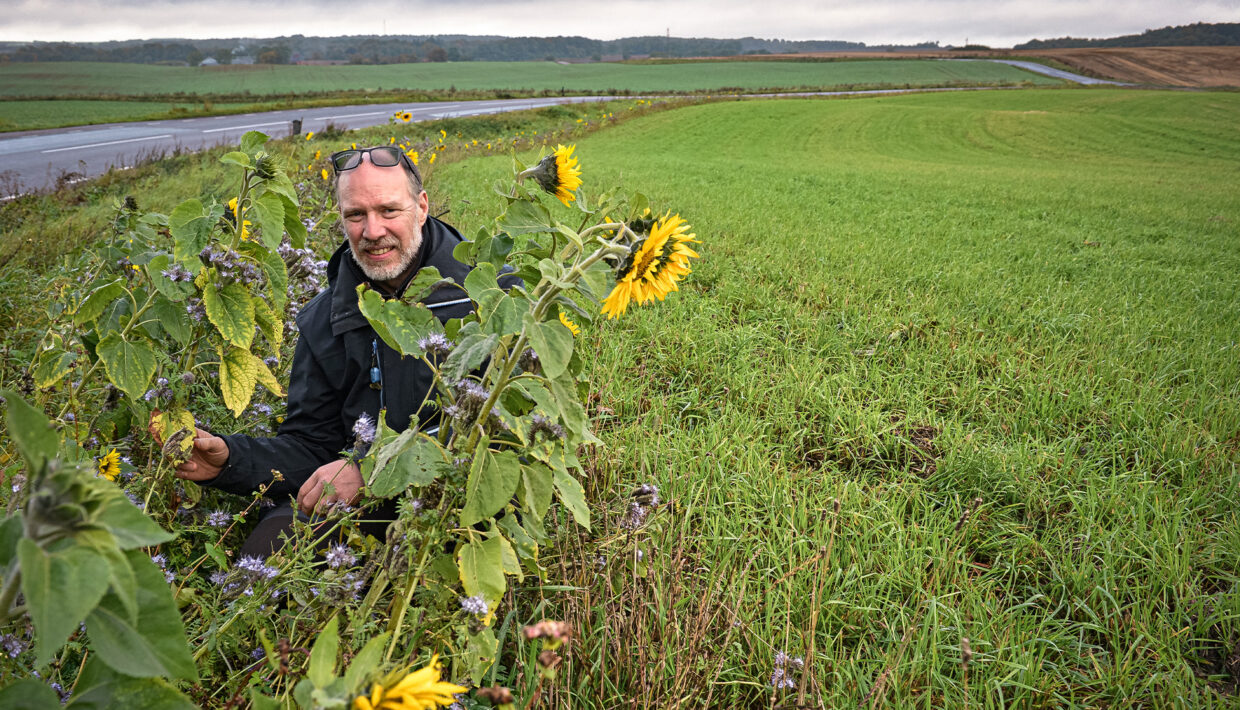 Mattias Hammarstedt, agron­o­mist and farmer, manages the project. “The whole of Sweden is blooming.”

The other avenue is to increase the floral diver­sity in fields. This can be done with more diverse rota­tions or cover crops. For example, an area of phacelia that covers only 0.1% of the foraging area can provide up to 90% of a beehive’s pollen harvest during a given period.

Plant breeding is another oppor­tu­nity. In the case of sunflowers, for example, there is a hypoth­esis that selecting geno­types which are more resis­tant to water stress has led to a decline in nectar poten­tial. So, it should be possible to select vari­eties to sow close to beehives based on the criteria of mellif­erous poten­tial.

In Germany, the project SoBinEn – with multiple research part­ners – aims to enrich the floral supply on fields desig­nated for growing energy crops. Launched in April 2020 this involves mixing crops to improve the quality and quan­tity of polli­na­tors’ food supply.

The first results show that in mixed cultivation with suit­able companion plants, a biomass yield just as high as mono­cul­ture sorghum can be achieved.

Sorghum millet (Sorghum bicolor L.) is grown as the main crop. Modern, medium-high dual-type vari­eties with a pronounced panicle are used, from which biogas can be easily produced. Since they provide plenty of pollen, they are also valu­able for the bees. But the ques­tion of nectar supply remains. “We have set up test plots combining sorghum with various companion plants,” explains Dr Steffen Wind­passinger from Justus Liebig Univer­sity. “In one model sorghum and the asso­ci­ated crops are sown and harvested together. In the other, under­sown crops are used, remaining in the field and contin­uing to grow after the sorghum harvest. The first results show that in mixed cultivation with suit­able companion plants, a biomass yield just as high as mono­cul­ture sorghum can be achieved. We have yet to deter­mine what the methane recovery looks like, but it can be assumed that a similar trend will be observed.”

At the right temper­a­ture and with suffi­cient water, sorghum is mostly self-polli­nating and does not need insects for full grain growth. However, the researchers suspect that bees foraging for pollen in sorghum can help stabilise yields in stress situ­a­tions and posi­tively influ­ence the crop’s methane-forming poten­tial. According to this hypoth­esis, the colorful under­crops grown inter­mixed with sorghum attract bees to the sorghum field. During the project, researchers will analyse whether the attrac­tion effect leads to the sorghum blos­soms being visited more inten­sively and whether this improves the grain forma­tion. 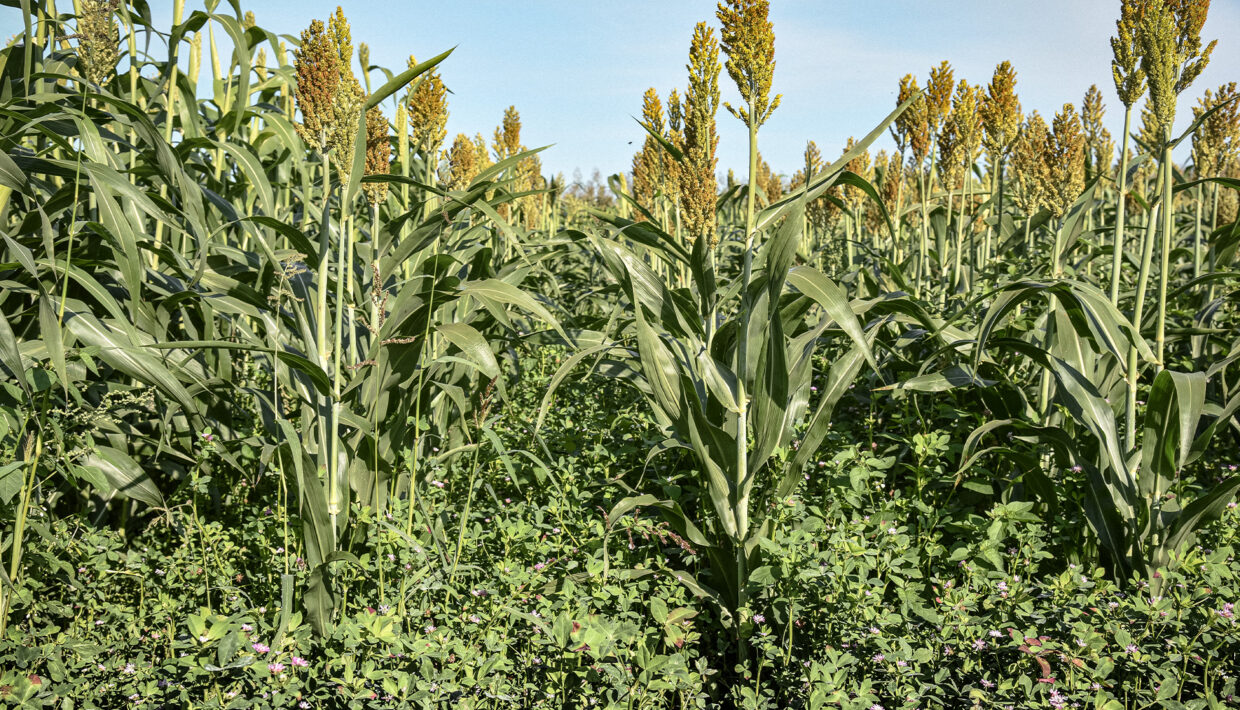 Germany: Along with clover, buck­wheat; sunflower; oil-bearing radish; beans; alfalfa and sain­foin are tested for mixed crop­ping with sorghum.

In collab­o­ra­tion with several seed compa­nies, Dr Wind­passinger, a specialist in sorghum breeding, is also studying the pheno­typic char­ac­ter­is­tics of plants used for mixed crop­ping. “The objec­tive is to ensure suffi­cient light and water resources for the nectar-bearing plants growing under­neath the sorghum. This is why we eval­uate sorghum plants using the criteria of vertical leaf arrange­ment, vertical rooting, and low tendency towards tillering. We are also seeking to define the optimum seeding density.”

Dr Rhein­hold Siede of the Kirch­hain Bee Insti­tute is studying the effec­tive­ness of the system in meeting bees’ dietary needs. “We cannot reveal defin­i­tive figures, but the nectar-bearing poten­tial of some asso­ci­ated plant­ings has already been clearly confirmed.” By means of pollen analyses, the scien­tist deter­mines which plants have been visited, and there­fore which mixtures are the most attrac­tive.

In Germany about 8% of agri­cul­tural land is dedi­cated to growing crops for energy produc­tion. “This is not about replacing biogas maize but rather supple­menting it,” says Dr Siede. “However, it is obvious that mixing energy crops like sorghum with plants providing nectar creates oppor­tu­ni­ties for polli­na­tors, but only if put into prac­tice on a suffi­ciently large scale, and not simply as niche systems. The goal is to widen crop rota­tions, with or without under-sowing. Biodi­ver­sity will benefit from this, and there­fore the bees.”

Bees are impor­tant for the envi­ron­ment and for crop yields. But how impor­tant are they for the global food supply? Here we present an overview of the diver­sity of these insects and their role in crop produc­tion.﻿