Green Revo­lu­tion in the Desert

In Egypt’s tradi­tional farming regions on the allu­vial soil of the Nile, there is hardly any good farm­land left. Multiple projects are there­fore trying to trans­form the desert into arable land. Can that work, and is it sustain­able?

The dark embank­ments extend up to the row of date trees at the edge of the wide field. Some 60 t of compost are fermenting in each row and giving off a strong aroma. “You almost want to eat it.” Taissir Saqr holds a handful up to his nose. Behind him there is a tractor pulling a hay tedder through one of the embank­ments. The compost must not become hotter than 65 °C, other­wise the microor­gan­isms die. That is why it is regu­larly turned and watered.

“I look after it as much as I look after my chil­dren,” laughs Mr Saqr. The Egyptian Sekem farm produces 8,000 t this way every year.

“The compost is at the heart of our method,” says Angela Hofmann as she casts her gaze over the field. The farming expert has been working on the farm 60 km north-east of Cairo, which was founded by Ibrahim Abouleish, since the early 1980s.

“When we started out, there was nothing but sand here,” she remem­bers. About 90 % of Egypt is desert, but Mr Abouleish and his colleagues have made it bloom. Today there is fennel, cumin, mullein, sesame, wheat, eggplants, toma­toes and much more growing on the company’s orig­inal farm. 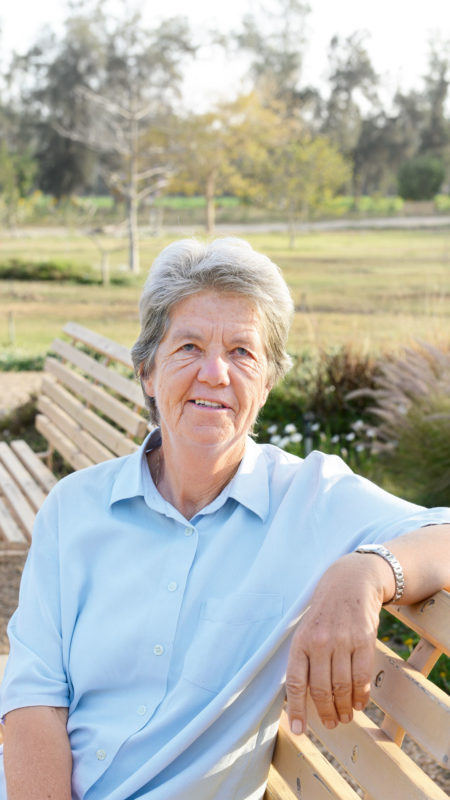 Angela Hofmann is one of the pioneers in the Sekem farm team.

But how can anyone get fertile farm­land out of this barren desert? First of all, these pioneers planted a wide belt of trees to provide shade and act as wind breaks. Then they sunk wells, applied silt, cow dung and various organic substances to the soil along with compost, before sowing plants and irri­gating them. Initially they flooded the fields. Now a system of pipes supplies sprin­klers and an effi­cient drip irri­ga­tion system. “Now we only use half as much water,” says Ms Hofmann.

And so over the years a 30 cm thick layer of humus has built up. At the heart of this is the compost. To begin with, 44-54 t/ha are mixed into the sandy soil once, then around 10 t each season after. Having the right crop rota­tion and avoiding fields lying fallow is also essen­tial. “Other­wise we’ll quickly end up with a desert here again,” explains Ms Hofmann.

Sekem is now the largest herbal tea producer in Egypt, as well as supplying bakeries across the country with sesame seeds. Contracted farmers across the entire country work 3,000 ha. The company exports herbs and medi­c­inal plants, which it produces according to strict organic guide­lines, and in addi­tion oper­ates a manu­fac­turing facility for clothes made of organic cotton from its own fields.

Concrete desert instead of a sea of sand

And yet, where there had been a desert of sand since the begin­ning of history, there is now a concrete desert. Cairo is growing non-stop and with the mega-metrop­olis come pollu­tants: Auto­mo­tive and indus­trial exhaust gases, dust and dioxin from ille­gally incin­er­ated waste. That is why Sekem is investing in an 890 ha new loca­tion hundreds of miles away, in the middle of the Libyan desert. 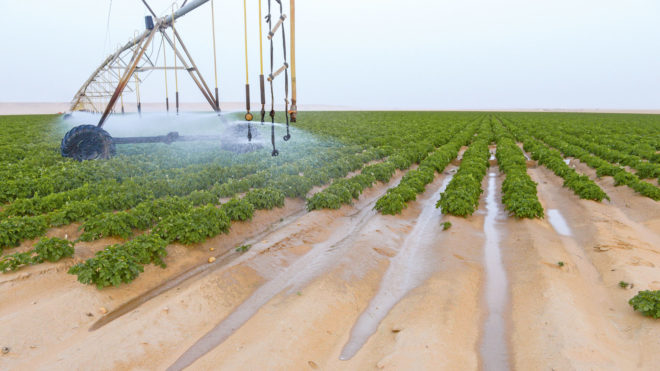 Expen­sive but effi­cient: with rotary irri­gia­tion you can plant more densely and use machines on the whole field.

The desert shows off its great diver­sity in colours and shapes on the long drive there. Then dark piles of compost appear, and behind them you can see the rotary irri­ga­tion systems.

“Acquiring the rotary irri­ga­tion is expen­sive, espe­cially since we want to run the pumps on solar energy,” explains farm manager Hany Hassanein. But it has major advan­tages over a drip irri­ga­tion system: There are no pipes in the soil to keep breaking down for a start. It is true that more water is used, but in turn it gener­ates almost twice the yield, because the farm can plant more densely compared to the drip irri­gia­tion system.

People have always grown plants in the desert, in and around the oases. Even today there are self-supporting farms that grow wheat, vegeta­bles, forage crops, pome­gran­ates, oranges or dates on small areas, irri­gated from 50-60 m deep wells that several farmers use jointly. These desert farmers flood their fields, since there is not enough money for effi­cient systems. When they invest, they invest in solar panels for running the pumps in order to save diesel. They don’t main­tain a system­atic soil struc­ture either. Many of these farms become over­salted or are given up for other reasons, such as a low wheat price.

Behind Mr Hassanein, men are walking through the field and pressing seedlings of mint into the wet sand. The unde­manding and robust plant is supposed to grow in the field for the first three years. “That’s then followed by legumes for a season, until we can plant medi­c­inal plants or even vegeta­bles.”

And where is the compost? Only a few dark balls in the yellow sand show that the soil has been prepared. Despite that, its full effects are evident. For instance, the compost protects the soil from becoming over­salted, which is a risk when the irri­ga­tion is so inten­sive, because the microor­gan­isms break down salt. 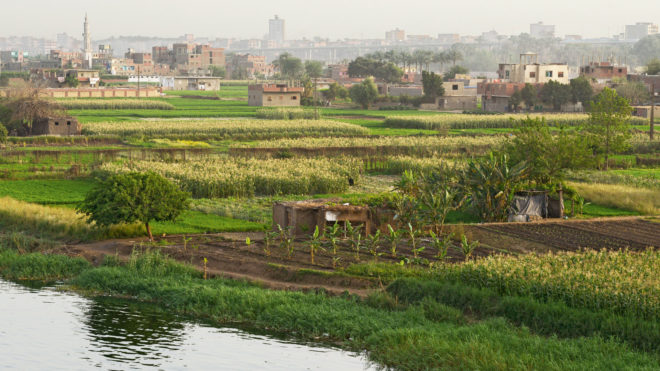 The tradi­tional farming area in the Nile valley is over-used and over-crowded.

Orig­i­nally, farming in Egypt was predom­i­nantly prac­ticed on the allu­vial soil of the Nile. However, today this land is increas­ingly spoiled by devel­op­ment and burdened by sewage flows in the river as well as residue pesti­cides. A gigantic dam project in Ethiopia on the upper course of the Nile could also mean a water shortage.

The farmed area has already increased by 7 % over the past 10 years and the current mili­tary govern­ment wants to further expand domestic agri­cul­ture. But the only place that can happen is in the desert. That is why the ambi­tious 1.5 m feddan (630,000 ha) project has been initi­ated – the feddan, a unit of area still commonly used in the region, is equal to slightly over an acre. 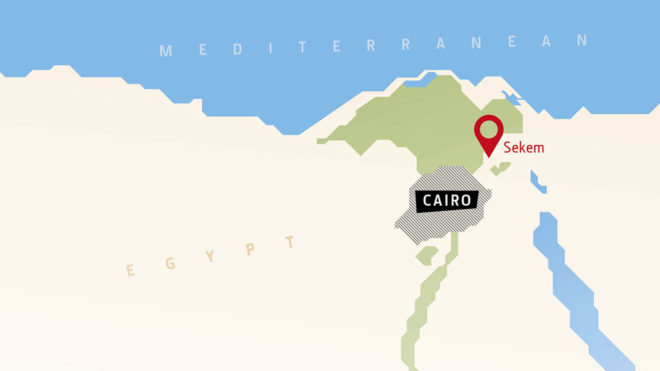 The inten­tion is for 630,000 ha of farm­land to be devel­oped from the desert and irri­gated from wells sunk up to 1,000 m deep into the Nubian Sand­stone Aquifer System, one of the largest aquifers in the world.

In the al-Farafra depres­sion for example, large plots of many hundreds of acres are being awarded to investors. They have to bear the high costs of the devel­op­ment them­selves.

The drive takes us along well built roads through the white desert with its enor­mous lime­stone sculp­tures. Art, formed from desert storms and the scorching sun. Semi-trailers with black, 2 t sacks full of pota­toes struggle north­ward on the oppo­site lane. What was once the tran­quil oasis of Farafra has now grown into a bustling centre. Rows of semi-trailers are parked along­side the roads, while combines and trucks full of sacks of dung are rolling along them. Harvest workers, with the tradi­tional kufiya around their heads, wait for work in the shade of the few trees. 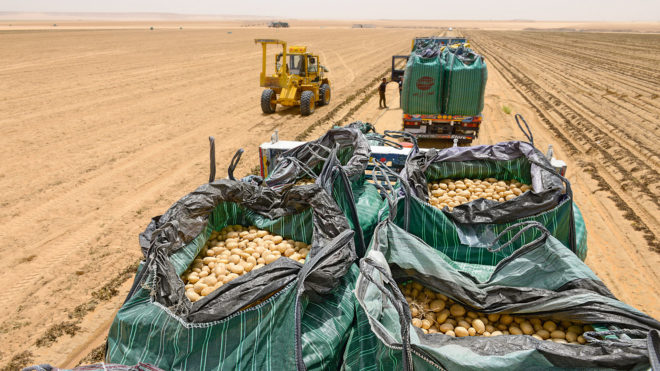 On the United Farm’s land, the potato harvest is in full swing. For three years the country’s largest producer of potato chips has rented 688 ha here to expand its produc­tion amidst the desert sands. Machines and people work early in the morning, so that the pota­toes are already on their way north on the trucks by the time it gets hot. Now a tractor is ploughing the residue under the soil and piling up the embank­ments for the next planting season.

The soil is ideal, which is by no means the case every­where in the desert.

“The soil is ideal, which is by no means the case every­where in the desert.” Quality manager Ali El Said lets the sand trickle through his fingers. “The top 40 cm is sand, which quickly gives off its mois­ture to the pota­toes.” The pota­toes are ripe after just three to four months. What’s more, the levelled, light soil provides good condi­tions for running the rotary irri­ga­tion: It slowly and lazily makes circles, covering an area of 50 ha or more in just 24 hours. Nutri­ents are mixed into the water and crop protec­tion is sprayed on if it is needed. 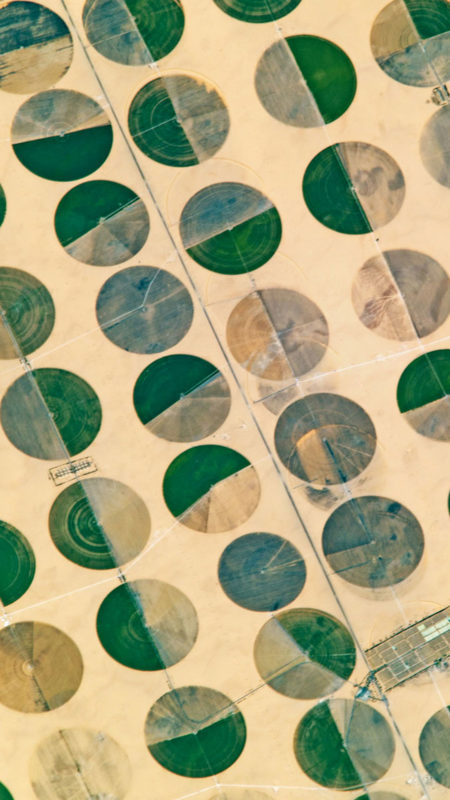 Pota­toes are also grown on the vast farm­land area near the United Farm. “The costs here are very high,” explains farm manager Mohamed Gad. Despite this, Daltex, Egypt’s largest potato producer with 400,000 t sold per year, wants to expand cultivation by almost 8,100 ha so as to produce seeds and organic prod­ucts, mostly for export. Crops are also being grown for export on other desert farms in the 1.5 m feddan project.

But other producers are also growing corn or wheat for the Egyptian market on their land, and the crops on Daltex’s potato fields are also meant for Egypt. So will the project expand food produc­tion for the local market? Or will it just open up new sources of foreign currency for big investors?

Use of the Nubian Sand­stone Aquifer System is contro­ver­sial, since it is a non-renew­able water resource. But does Egypt have another choice besides using its deserts for farming? The space is there, it just needs to be used sustain­ably. Ideally by building up a living layer of humus. That helps to save water, stop the soil from becoming over­salted, and absorbs green­house gases. Taissir Saqr from the Sekem farm has the compost needed for that.

Turkish agri­cul­ture has lots to offer. With prod­ucts such as hazel­nuts, figs or sultanas, Turkey is a global leader in produc­tion. Looking at the whole industry shows an impres­sive variety of prod­ucts, whereas many regions concen­trate on growing only one specific crop.﻿