“It is our job to increase the humus content”

A good content of organic matter not only helps the envi­ron­ment, but also the fertility of the soil – for Henning and Arne Beecken, the two aspects cannot be sepa­rated from each other. Following this prin­ciple, the young farmers have completely converted the family farm’s cultivation system.

In Südergellersen in the north of Germany, brothers Henning and Arne Beecken work 400ha with their parents and four employees. The crop rota­tion in their sixth-gener­a­tion family farm includes 60ha of pota­toes and 35ha of sugar beet while the rest is reserved for cereals, notably hybrid rye. Seed produc­tion is the spear­head of the oper­a­tion. The soil is sandy with some wet zones: All of the land is irri­gated and 30% is drained.

When they got set up, the two brothers convinced their parents to put the farm on a new track. The clincher was working on other farms which had soils with more organic matter. “We have changed the system in the past three years,” says Henning, high­lighting that the main focus here is on signif­i­cantly reducing tillage.

The seed contract now requires two years of root crops before a grain crop where before it was possible to have consec­u­tive cereal crops. “Because we now have more root crops, we have reduced tillage by 70%.” The brothers do not follow a fixed rota­tion, but instead adapt to indi­vidual fields year after year.

A rather complex system: To comply with the two years root crop prior to a cereal crop rota­tion as required in the new seed contract, the Beeckens must exchange several hundred hectares with their neigh­bors, depending on the year. “We treat these fields as if they were ours,” empha­sizes Henning.

Deep tillage is normally required before sowing the grain crop. To forego this process after harvest, the family opted to invest in tech­nology to prevent possible regrowth: A high-tech combine “that would be able to cover another 1,000ha, but which allows us to thresh at very little loss, below 0.5%. Other­wise, the grains that we leave in the field will annoy us again the next time a grain crop is planted,” says Henning.

Because of our special­i­sa­tion, we try to find a balance and make compro­mises.

Another avenue is opti­mising mulch tilling. “We are now asking ourselves: Is it always neces­sary to change the discs to five centime­tres? We have also started using a spiked harrow.” But three mulch tillage passes are often neces­sary to germi­nate as many seeds as possible. “Of course, it’s bad for water and humus reten­tion, but we don’t use less than three. We make money from our seeds.”

Lastly, the farm has completely rethought its approach to fertiliser by increasing its organic intake. The 620 pigs raised here would not be enough to fulfil the nutri­tional needs of the 400ha. “We orig­i­nally wanted to work with a manure exchange, but it quickly became clear to us that we needed a perma­nent partner. There­fore, we have initi­ated a part­ner­ship with a farm where we take the diges­tate from their biogas oper­a­tion,” says Henning. “For this reason, we have invested in a covered 6,000m3 silo.” Every day a truck drives into the yard with a load of diges­tate. During the intake the nutrient content is measured by an inte­grated NIR sensor. “We have to be clear about the ingre­di­ents. You are prac­ti­cally dealing with a living substance. That needs to be analyzed.” The family expects that the invest­ment pays off within ten years.

The first appli­ca­tion is done behind a chisel plough with hanging pipes, so the liquid manure is covered by soil imme­di­ately after spreading. For fertil­ising the grain crops in spring, a 12m disc injector is used, and a 1m section control unit avoids excess appli­ca­tion. The land is not clas­si­fied as a water vulner­able zone, however the most precise calcu­la­tion for the crop require­ments and soil para­me­ters is the name of the game here. Ulti­mately, mineral fertiliser use was reduced by 80%. 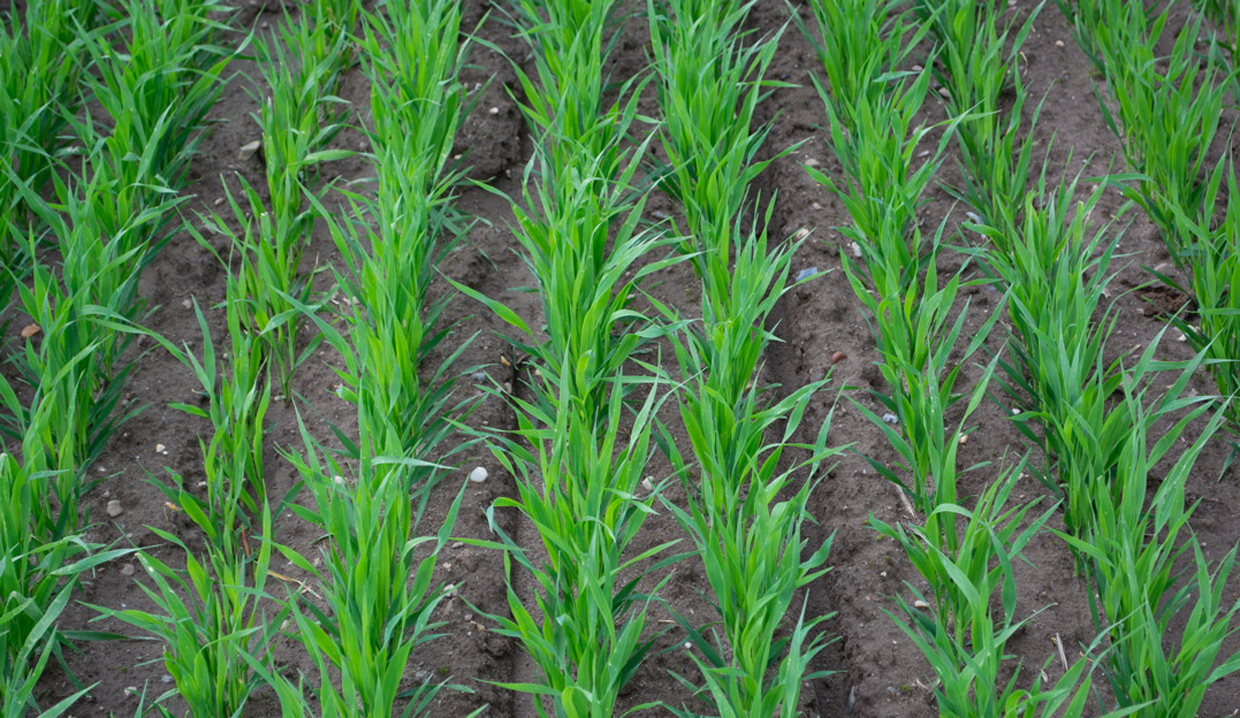 Slits between the rows indi­cate where organic manure was applied. 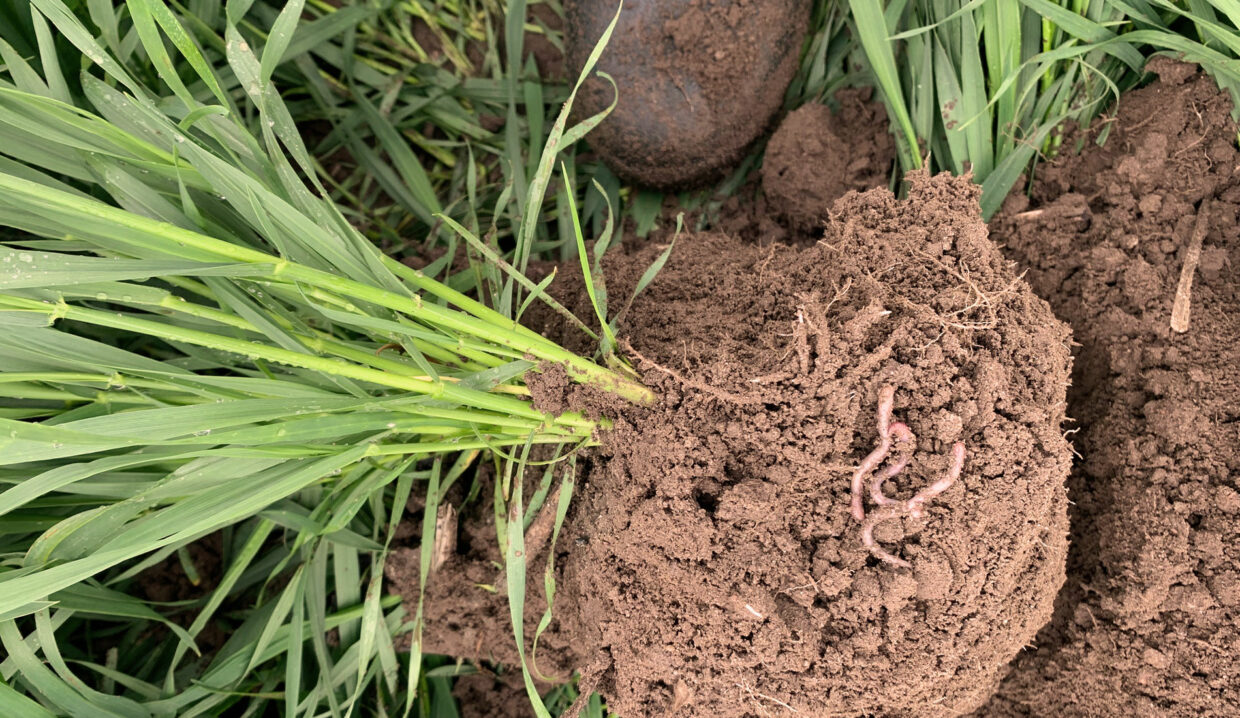 Cover crops have also been intro­duced, always before the root and rye crops. “We no longer leave the fields bare in winter. It’s an outdated approach,” says Arne. The farm uses a ‘greening’ mix, which cannot contain too many legu­mi­nous crops if spreading organic manure after­wards. Oats are limited because of the risk of seed cont­a­m­i­na­tion. “Cover crops create a good soil struc­ture and trans­form the nutri­ents in the soil into biomass,” summarises Henning. “We fertilise the crops to obtain good rooting.

Signs of a more vibrant soil

“The ground starts to smell like soil again when you put a spade to it,” smiles Henning. “Not just as a substrate, but like living soil.” In areas where the soil is not tilled for three years, water reten­tion improves signif­i­cantly. “This is another benefit of cover crops, as their rooting improves the soil’s capil­lary action.

“Because of our special­i­sa­tion we try to find a balance, to make compro­mises,” says Arne. “If we weren’t producing seed, we would certainly use the no-till system and direct sowing, if possible,” adds his brother. “But it would be tricky to set up direct sowing with the potato harvester sifting through the entire topsoil every four to six years.” Even so, it’s obvious that the organic matter content has increased. “Until three years ago, you wouldn’t have seen a single earth­worm. But they’re back and every now and then we see a bird catch one which is rewarding.”

For us, this is a gener­a­tional project.

The family expects a 10-year return on the invest­ment made. A deci­sive point is the nitrogen fertiliser costs, which have fallen by 80%. The envi­ron­mental balance has not been calcu­lated, but the indi­ca­tors are there: A decrease in mineral fertiliser usage and, of course, increased organic matter. 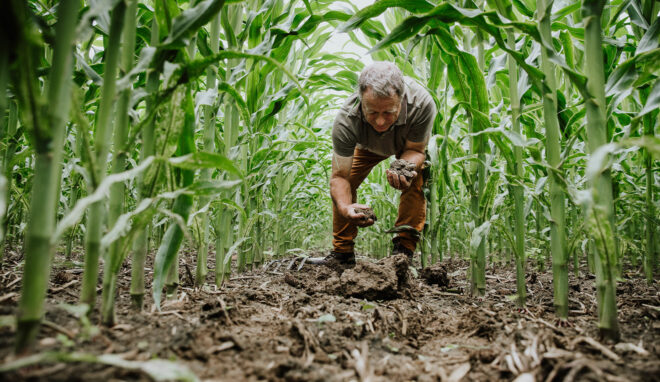 Field crops are gaining recog­ni­tion because of the impor­tant climate benefit they offer: Storing carbon in the soil by increasing its organic matter content. This creates new expec­ta­tions of agri­cul­ture, but also new oppor­tu­ni­ties. Visit to a French farmer who markets his CO₂ storage.