John Deere gets under the skin

A John Deere fan lives and works in the Cana­dian province of Québec. His love liter­ally gets under your skin. Swiss-born Jean-Charles Reihle’s tattoos tell a story all of their own.

One of the most common reasons people get tattoos is to have a perma­nent record of some­thing signif­i­cant in their lives. For Jean-Charles Reihle, farm oper­a­tions manager at Ferme Bonneterre in St-Paul, Quebec, nothing has had a greater impact on his life than his passion for all things John Deere. It colored his child­hood, deter­mined his career, and shaped his hobbies. He just might be the company’s biggest fan.

Some­times the smallest event will shape the course of a person’s entire life. That pivotal moment for Reihle came when he was six. The way he describes it could be a scene from a movie.

My path was set, no matter what, I was going to work with a John Deere tractor.

A young boy is playing in the picturesque Swiss village of Vionnaz; suddenly he hears the distinct put-put-put of a diesel engine. He dashes out to the street and sees a local farmer coming down the road on a John Deere Lanz 710 tractor. He is awestruck. The farmer waves and continues down the road. The boy grabs his bike and follows the tractor.

“After that, each time he would drive in front of our house I would take my bike and follow him out to the fields,” Reihle says. “He’d stop and let me ride with him on the machine. I was the only child in the village, in all the villages, that he would allow to ride with him. My path was set, no matter what, I was going to work with a John Deere tractor.” 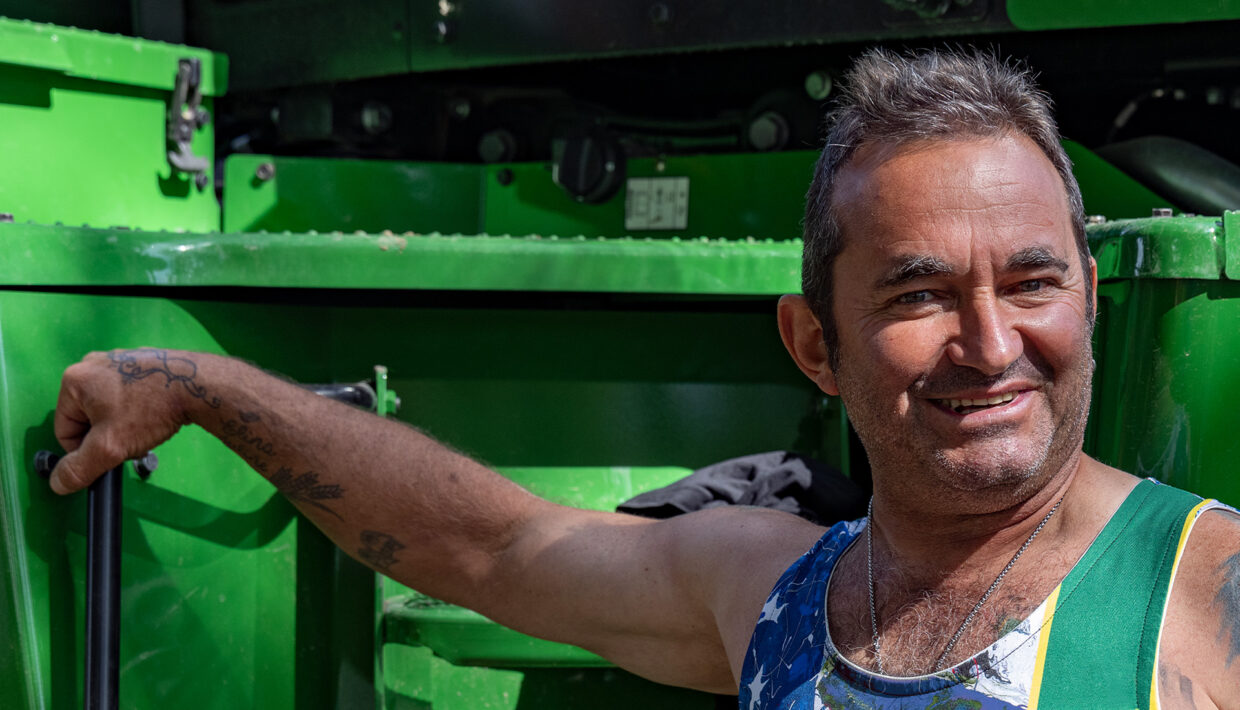 Jean-Charles Reihle and John Deere – it was love at first sight.

Reihle is a collector. Anything related to John Deere is fair game; scale model equip­ment, Furrow maga­zines, toys, clothing, and home decor. He collects Deere-themed memo­ries and expe­ri­ences too. When he saw the commer­cial intro­ducing the 9RX Series Trac­tors, he spent two years searching for where it had been shot. “Finally, an Amer­ican collector friend told me it had to be filmed in the Palouse. So, I booked a vaca­tion to Oregon and Idaho to try and find it.” He memo­ri­al­ized his trip in some of the tattoos on his back.

“The red barn on my right shoulder is by Idaho Falls,” Reihle says. “The silo at the bottom is in Southern Alberta near the Montana border.” The tattoos on Reihle’s back and arms are an ode to a century of John Deere adver­tising. There are copies of logos from different eras, the company’s famous tagline ‘Nothing runs like a Deere,’ scrolls down one arm. His back is domi­nated by a large 9RX tractor and a repro­duc­tion of the well-known black and white portrait of John Deere; an Amer­ican flag frames one of his quotes. 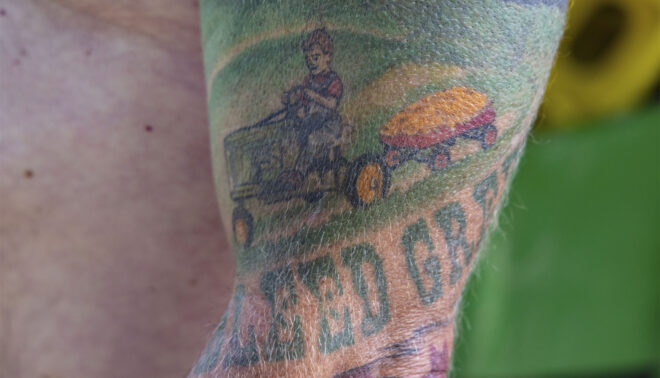 Nearly every square inch of Reihle’s arms and back are covered in John Deere-themed tattoos. 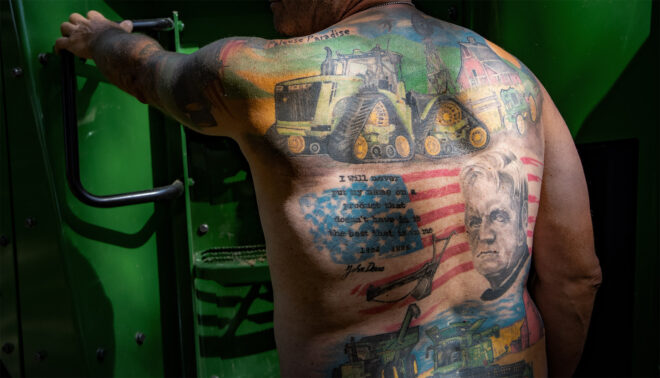 It took 74 hours spread over two years to complete the tattoo diorama on Reihle’s back. 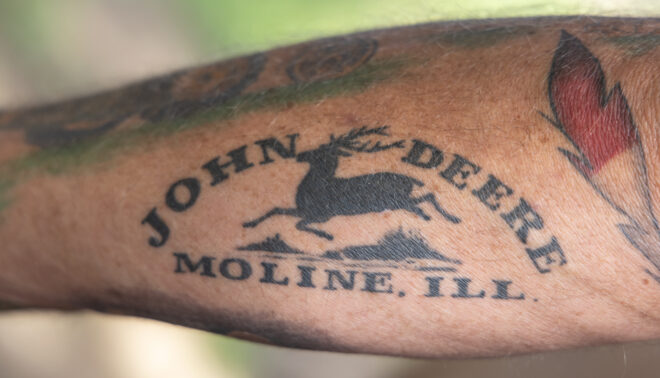 The logo with the leaping deer.

His first tattoo was the John Deere logo over his heart. Later, Artmade­tattoo, an Italian tattoo artist studying in Switzer­land, did the 9RX tractor on his back. Two months after that, Reihle flew down to Sani­cola in the heel of Italy where Artmade­tattoo had set up shop, and the two friends started working on their great collab­o­ra­tion, the elab­o­rate diorama on his back. “It took 74 hours in multiple sessions over two years to complete my back and arms,” Reihle says. “The six longest sessions lasted 8 hours each.”

Reihle didn’t come from a farm back­ground but he knew what he wanted to do. From the time he was old enough to get a job, he sought out work on farms and always kept a special place in his heart for John Deere. Later, he studied farm manage­ment at school and ulti­mately completed a Swiss Federal master’s degree in agri­cul­ture. He became fasci­nated in collecting after meeting a group of collec­tors at a farm show in Belgium shortly after getting his first farm manager posi­tion. He’s now part of the global frater­nity of serious John Deere collec­tors. He’s trav­eled exten­sively across the U.S. to meet with great collec­tors, like Bruce Keller in Nebraska. 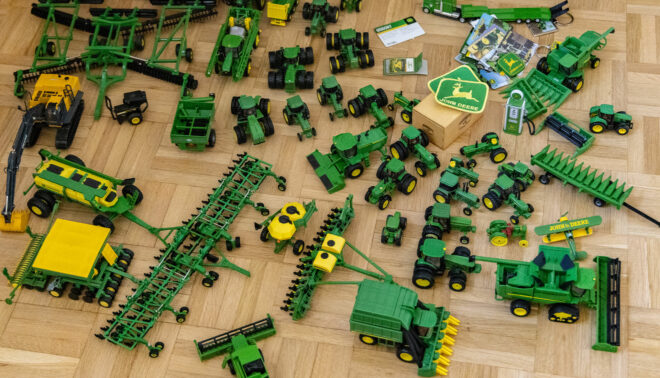 Reihle brought some favorite pieces from Europe when he emigrated to Canada. He’s slowly starting to build a new collec­tion. After all, when you are a collector, there’s always some­thing missing.

“History is impor­tant to me,” Reihle says. “I bought lots and lots of toys, trac­tors and old Furrows off eBay. I had an entire house filled with a John Deere collec­tion. It included porce­lain dolls, rare things for chil­dren, teenagers, and adults. I love all the old machines. I have a 1937 Model B, a 1951 Model G, and a collec­tion of plows dating from 1880 to 1890 and a very old plow that came from North Dakota. My favorite is my Waterloo Boy toy.”

Reihle had to sell much of his Euro­pean collec­tion before he emigrated to Canada in 2021. He stored a few of his favorites with a friend in France and brought some with him to Canada. His collec­tion is growing again; it will likely never be complete. “I’m a collector,” Reihle says. “And when you are a collector, there’s always some­thing that’s missing. Every­thing is beau­tiful; it’s hard to say no.”

Carsten Behr and Ulrich Löhrs’ fami­lies have lived next to one another for gener­a­tions. But being good neigh­bours means more than just that. One of these farm managers uses conven­tional means, the other organic. Last autumn, both farmers entered into a farm part­ner­ship for the FINKA biodi­ver­sity project. Will it succeed?﻿

One hundred years ago, Hein­rich Lanz unveiled the first Bulldog, laying the foun­da­tion for tractor produc­tion at the Mannheim factory. The Bulldog was an impor­tant pioneer in the mech­a­ni­sa­tion of agri­cul­ture. Its name became synony­mous with the tractor. ﻿