One hundred years ago, Hein­rich Lanz unveiled the first Bulldog, laying the foun­da­tion for tractor produc­tion at the Mannheim factory. The Bulldog was an impor­tant pioneer in the mech­a­ni­sa­tion of agri­cul­ture. Its name became synony­mous with the tractor.

When the German Agri­cul­tural Society‘s (DLG) trav­el­ling exhi­bi­tion opened its doors on 16 June 1921, the Hein­rich Lanz company presented the Bulldog HL 12 for the first time. In keeping with the philos­ophy of its inventor, Dr Fritz Huber, that an agri­cul­tural tractor cannot be too “single-cylinder”, it was hard to beat in terms of simplicity. The 12hp hot-bulb engine with only one cylinder drove the rear wheels via a chain. There was no gearbox. To reverse, the motor’s direc­tion of rota­tion was changed. 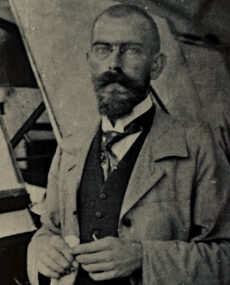 Dr Fritz Huber: Inventor and designer of the Bulldog.

To do this, the engine was brought almost to a stand­still and then accel­er­ated again when the piston was in the right posi­tion. Mr Lanz kept to the concept of the hori­zontal two-stroke single-cylinder engine until the end of the Bulldog era around 60 years ago. The hot-bulb engine also gave the machine its name, as the shape of the cylinder head resem­bles a dog’s nose.

To start the Bulldog, the lower part of the hot bulb was heated with a soldering or heating lamp until it glowed red at around 700 to 800°C. Only then was fuel pre-pumped manu­ally and the engine started by hand at the flywheel. Although this proce­dure was time-consuming, it didn’t take much longer than harnessing up draft animals.

A superb test run from Mannheim to Berlin

Another great advan­tage of the hot-bulb engine is that it runs on any fuel that is liquid and combustible. This also includes vegetable and waste oil or spirit. This proto-Bulldog was offered either with solid rubber tyres or profiled iron wheels.

In 1925, Mr Lanz organ­ised a test drive from Mannheim to Berlin to publicly demon­strate the Bulldog’s reli­a­bility. After 17 days and over 1,000km, the train of three HL 12s and a 38hp “Feld­dank” tractor reached the Bran­den­burg Gate. 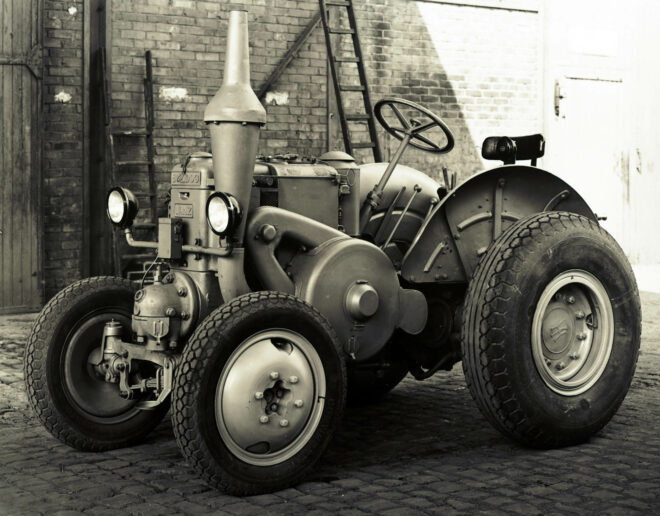 The HL 12 proved to be ideally suited for trans­port work and driving threshing machines. On the other hand, it could only be used to a limited extent in the field. To counter this, in 1923, Mr Lanz intro­duced the Acker-Bulldog HP with four-wheel drive.

This was the first tractor with artic­u­lated steering, as found today in our large 9R Series trac­tors. Dr Huber even patented this drive concept in the USA in 1924, although Mr Lanz never exported Bull­dogs to the States. At around 5,000 gold marks, the HP Bulldog was rela­tively expen­sive, espe­cially as the price had to be paid in US dollars.

From 1926 onwards, Mr Lanz there­fore turned increas­ingly to large-scale enter­prises, as these were less scep­tical of mech­a­ni­sa­tion. With the HR 2, the company intro­duced the first of the famous 10-litre Bull­dogs in 1927. This deliv­ered a maximum of 28hp and had a gearbox with four gears which could be used forwards and back­wards. The front axle of the all-rubber-tyred traffic version already had suspen­sion at that time. In order to produce more effi­ciently and to meet demand, this tractor was the first vehicle in Germany to be built on an assembly line. 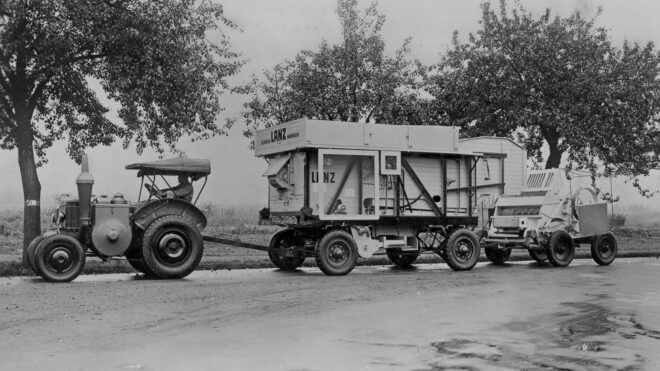 A typical sight until the 1950s: The trans­port “Verkehrs-Bulldog” with threshing machine and baler.

The Bull­dogs did not have a closed cooling circuit until 1928, so the cooling water simply evap­o­rated. This made it diffi­cult to use the Bull­dogs in hot, dry regions. It was not until the HR 4 that Mr Lanz offered a Bulldog with a radi­ator cooler, which was initially exported to these regions. However, these “cooler bull­dogs” soon also estab­lished them­selves in more temperate climates. Another inno­va­tion was that the gearbox now offered three forward gears and one reverse gear. 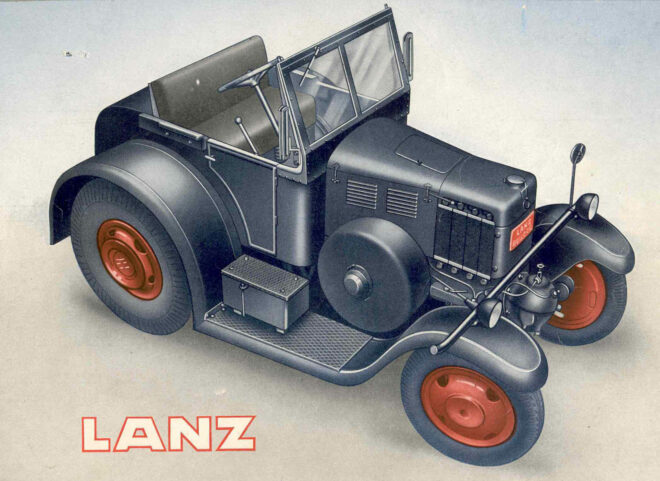 The speedy “Eil-Bulldog” was also popular outside agri­cul­ture.

While the 10-litre Bull­dogs were mainly used on large farms and for trans­port, from 1931 Mr Lanz again offered a tractor for medium-sized farms with the HN series. It had an engine with a capacity of 4.7 litres, with 20hp in the begin­ning. In the course of devel­op­ment, the power was increased to 35hp.

Further inno­va­tion came at the begin­ning of the 1930s, with first the trans­port and then soon also the agri­cul­tural Bull­dogs being offered with pneu­matic tyres. This not only brought a consid­er­able gain in trac­tion and comfort, but also allowed signif­i­cantly higher speeds. In 1934, Mr Lanz put a speedy “Eil-Bulldog” on the market for the first time. Until the 1950s, these were the typical means of trans­port for showmen, sawmillers and coal merchants. Another new devel­op­ment in the early 1930s were the cater­pillar Bull­dogs.

For small farms, from 1939 Mr Lanz offered the “Farmer’s Bulldog”, or the “Bauern­Bulldog” – as it was offi­cially called – type D 4506 with 15hp. It was the first Bulldog that he offered with a hitch. The hoped-for large-scale produc­tion failed to mate­ri­alise, as Bulldog produc­tion came to a stand­still as a result of the war. The first new devel­op­ment after the war, the D 5506 presented in 1950, was tech­ni­cally based on the D 4506. From 1952, the new semi-diesel engine replaced the hot bulb – initially in the small models and later also in the larger Bull­dogs. 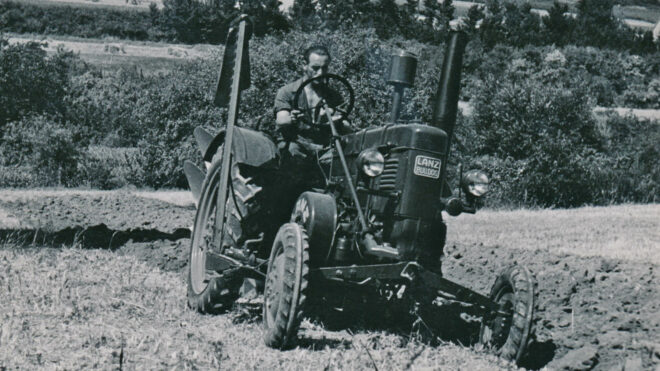 The desig­na­tion “semi-diesel” comes from the fact that these engines were started with more igni­tion-friendly petrol. Once the engine had warmed up, it continued to run on diesel. Time-consuming preheating and start-up was there­fore no longer neces­sary. Mr Lanz also offered conver­sion kits to equip older hot-bulb Bull­dogs with the new engines.

In addi­tion to the classic Bull­dogs, Mr Lanz also offered the “Alldog” attach­ment carrier from 1951 and the “Bulli” compact tractor from 1955. Both were primarily intended for small farms, which were often still working with draft animals. For example, adver­tisers liked to empha­sise that such a tractor was more econom­ical to run than two horses. The attach­ment carriers were char­ac­terised by the fact that the imple­ments were mounted on the front of the support frame and the driver always had them in view.

For some models, the ‚dogma‘ of the single cylinder was aban­doned and two-cylinder engines from MWM (Motoren-Werke Mannheim) were installed. The last Bulldog gener­a­tion to come onto the market from 1955 were the full diesel models with 16 to 40hp, for which a hydraulic three-point linkage was now also offered. These machines were started with diesel after a short pre-heating process, so it was no longer neces­sary to switch the fuel. 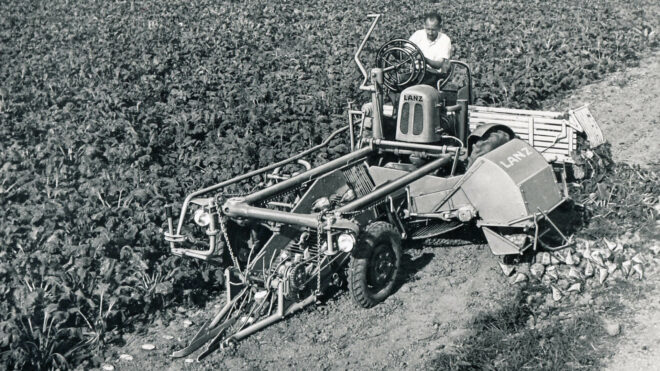 An Alldog during beet harvest.

A tractor with a future

The 200,000th Bulldog, a D 2416, rolled off the produc­tion line in Mannheim in 1956. In the same year, John Deere acquired the majority of shares in Hein­rich Lanz AG. Two years later, the Bull­dogs were deliv­ered in the colours green and yellow. In 1960, John Deere-Lanz AG, as the company was now called, intro­duced its first new devel­op­ments – the 300 with 28hp and 500 with 36hp. 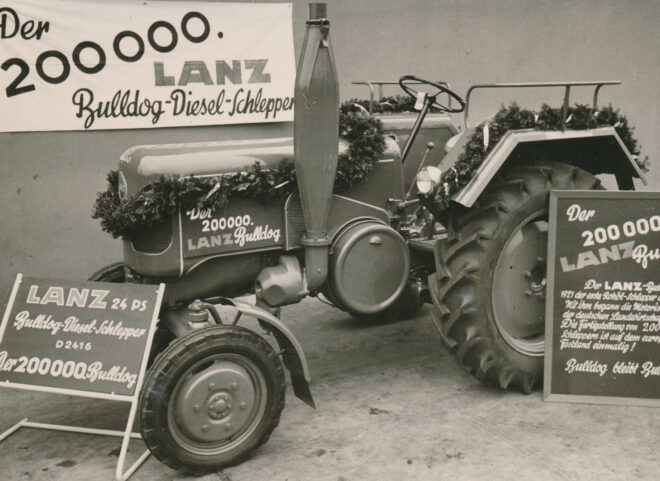 The new “trac­tors with a future”, as the adver­tising slogan said at the time, had modern four-cylinder in-line engines, a 10-speed trans­mis­sion and modern control hydraulics. The D 5016 and D 6016 semi-diesel models continued to be produced until 1962; in Getafe, Spain, Bulldog produc­tion continued until 1963.

Although the Lanz Bulldog may seem anti­quated today, in its day it was a real inno­va­tion. Espe­cially during the interwar period and directly after the Second World War, it made a deci­sive contri­bu­tion to the mech­a­ni­sa­tion of agri­cul­ture. This is not only evident in the exports to coun­tries around the globe, but also in several licensed construc­tions and copies, such as Ursus in Poland, Pampa in Argentina or Kelly & Lewis in Australia. The Bulldog will always remain legendary, not least because of the noise it made. 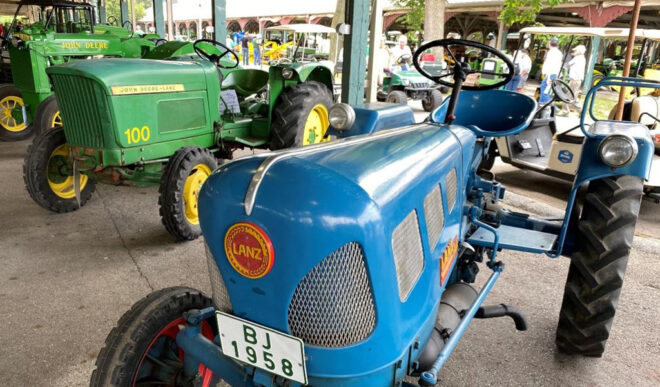 Although Lanz trac­tors have never been sold in the USA, there is a small and enthu­si­astic fan commu­nity there which meets and organ­ises, among other things, antique tractor shows. Chris Boyens is jointly respon­sible for one of these events. Together with his fellow campaigners, he has launched the Classic Green Club, which brings together John Deere’s enthu­si­asts across all model and equip­ment ranges. At the last major event, the Classic Green Reunion 2021 in Ohio, 3,000 visi­tors came together to marvel at around 800 machines and attach­ments and to swap ideas. Mr Boyens explains: “Old trac­tors have a special fasci­na­tion for many people: Their simplicity, the stories asso­ci­ated with them. It brings the people here together. 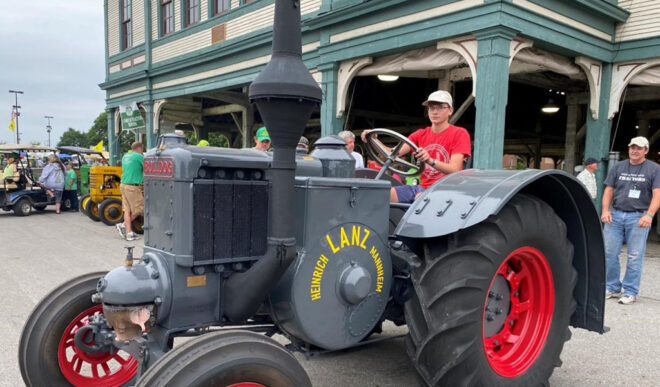 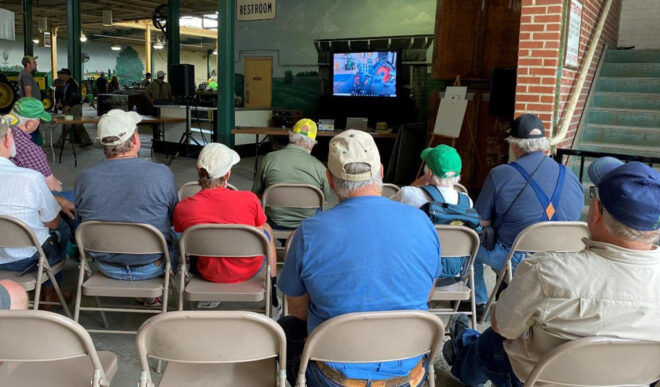 Guests were treated to a very special video on the history of Lanz by Chris Quick, the Lanz expert in Mannheim. Chris Boyens and Graham Thompson provided a presen­ta­tion and answered ques­tions on 100 years of Lanz. 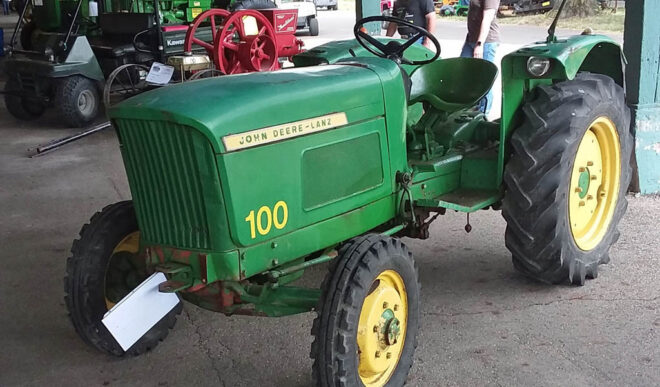 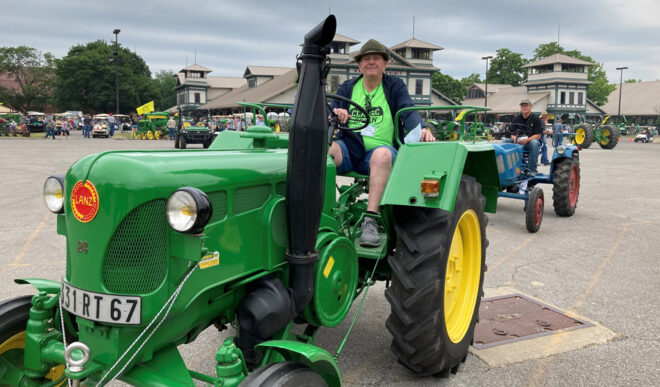 D2416 Lanz Bulldog, 24hp driven by John Boyens and owned by Neil West both from Betten­dorf, Iowa. Neil is a Lanz collector and purchased this tractor from France. Graham Thompson on the right.

One special high­light of the last Classic Green Reunion was made up by four Lanz trac­tors, which attracted a lot of atten­tion, and not only because it was the brand’s 100th anniver­sary. Graham Thompson, who brought one of the four Lanz trac­tors to Ohio, says: “The most frequent ques­tion was why do you have blue trac­tors at a green event? It was often the starting point of a conver­sa­tion where many people were completely surprised to learn that Lanz trac­tors are part of the John Deere family.”

Messrs. Boyens and Thompson also provided this and other infor­ma­tion during their own presen­ta­tion on 100 years of Lanz. They were supported by a video message from the expert for John Deere history in Mannheim, Chris­tian Quick. But what is it about Lanz trac­tors that fasci­nates Mr Thompson? “From the design and robust construc­tion, to the very specific sound: These trac­tors are excep­tional.”

What started as a hobby has turned into a bustling busi­ness for Dutch John Deere fan Guus van Daele and his son Stanny: The two collect and trade in old spare parts and in so doing ensure that a piece of history is preserved.﻿

John Deere has over 100 years of expe­ri­ence with harvesters – and the first combine is already over 90 years old. To date, we have produced over 750,000 combines, including over 120,000 single rotor machines. This is a short story about a long tradi­tion.﻿