The pumpkin is a special crop that has a long-standing tradi­tion in Styria. Now, the fruit with its seed oil is also making an inter­na­tional name for itself. Local farmers and also the region are bene­fiting from this.

Pump­kins in swaths? Threshing them? It’s hard to believe, but that’s exactly how Styr­ians get the seed oil which char­ac­terises the cooking culture of the whole region. On sunny September days, Austrian farmer Alois Thier, in the small town of Ober­lamm, mounts a snow plough-like attach­ment to the front of his tractor which pushes the ripe pump­kins, almost hidden under knotweed, St John’s Wort and salt­bush, together into rows.

Then, the plump, yellow, foot­ball-sized fruits are reaped by a self-propelled harvester or by a harvesting machine pulled by a tractor. In both instances, a hedgehog-like spiked roller picks up the fruits laying on the ground. A shred­ding barrel squashes the pump­kins and, assisted by brushes and pneu­matic suction, the seeds are sepa­rated from the flesh of the fruit into a sieving drum. A conveyor then carries the slip­pery seeds to the tank. The chopped up flesh of the fruit ends up on the field again. 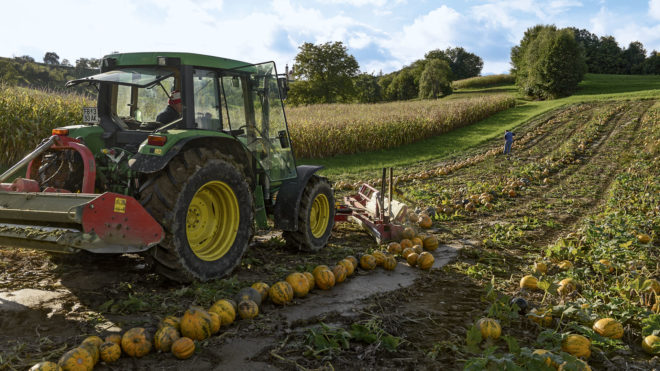 Using trac­tors with attach­ments similar to snow plows, the oil pump­kins are pushed into rows for harvesting.

The threshing tech­nique of the harvesters act in a similar way. However, there are only six exam­ples of these, constructed through painstaking pioneering work by contractor Karl Wilfing from Großstein­bach , who modi­fied combine harvesters for this purpose. The advan­tage of this method is the speed of the harvest. In any case, the era of manual de-seeding – as was previ­ously common prac­tice – is well and truly over. Only very few Styrian farmers perform this manual work on small parcels of land.

On the contrary, today, when the oil pump­kins culti­vated on more than 9,800 ha in the southern and south­western part of Styria turn yellow, it is a matter of urgency. The radiant dashes of colour on the pumpkin fields indi­cate that the required ripeness for harvesting the “green gold” contained in the seeds has been reached. “In order to pick the right harvesting time, you need to have a good, expe­ri­enced knack for it. If you harvest too early, you have prob­lems with oil quality; too late and you run the risk of the fruit decaying quickly,” says Rein­hold Pucher, a member of the Working Group of Arable Farmers of the Styrian Chamber of Agri­cul­ture. “Also, no other fruit is quite so depen­dent on the weather,” he adds. It doesn’t like cold in the spring, often suffers from dryness in the summer and rain during the harvest quickly has a nega­tive impact on the quality.

In order to pick the right ­harvesting time, you need to have a good, expe­ri­enced knack for it.

After “threshing”, the pumpkin seeds need to be dried out from a maximum water content of 60% down to 6 to 8% within a few hours. “I know from the way a pumpkin seed cracks what its humidity level is,” Karl Höfler, a mill farmer in Kain­dorf, says about the sensi­tive hand­i­craft. “If the seed bends, instead of breaking, when we do the breaking tests, it is too moist,” he explains, standing in front of a tub that is heated to 130 °C, in which finely-ground pumpkin seeds are kneaded into a green pulp with water and salt and then gently roasted. The pulp then goes into a press, out of which flows the strong-tasting oil. The colour varies: the seed oil has a dark red tone to it, but looks light green in thin layers. 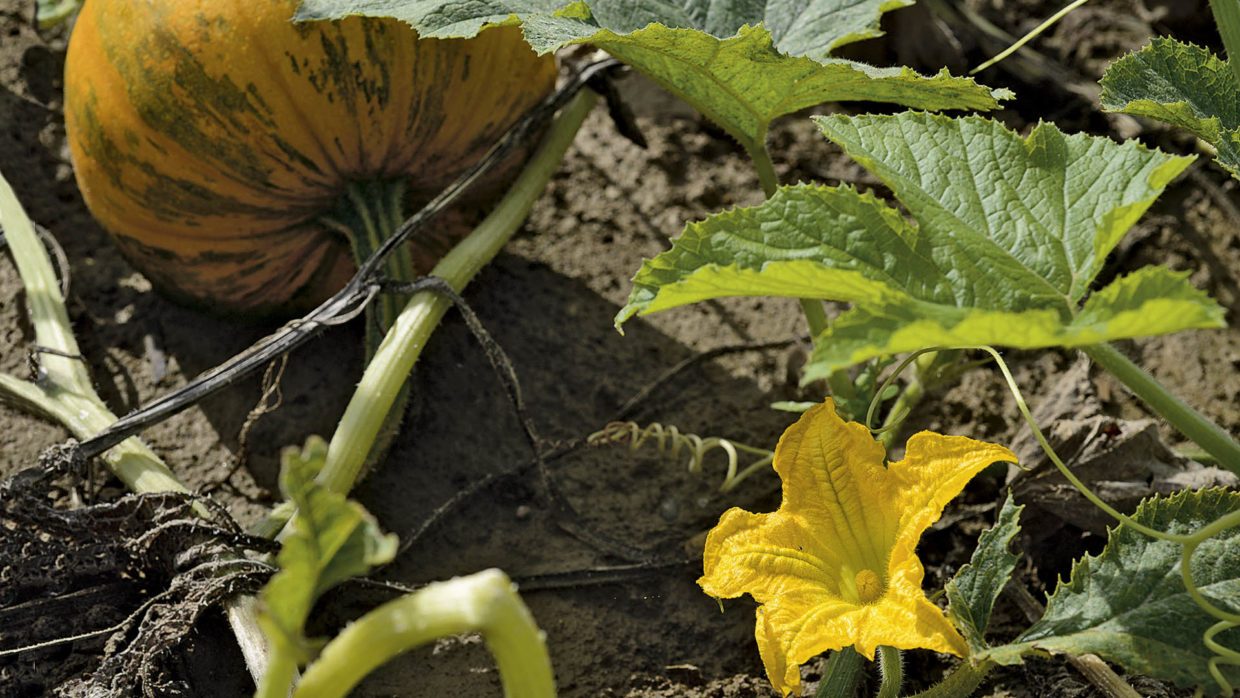 The stem runs flat on the ground from the root to the fruit. 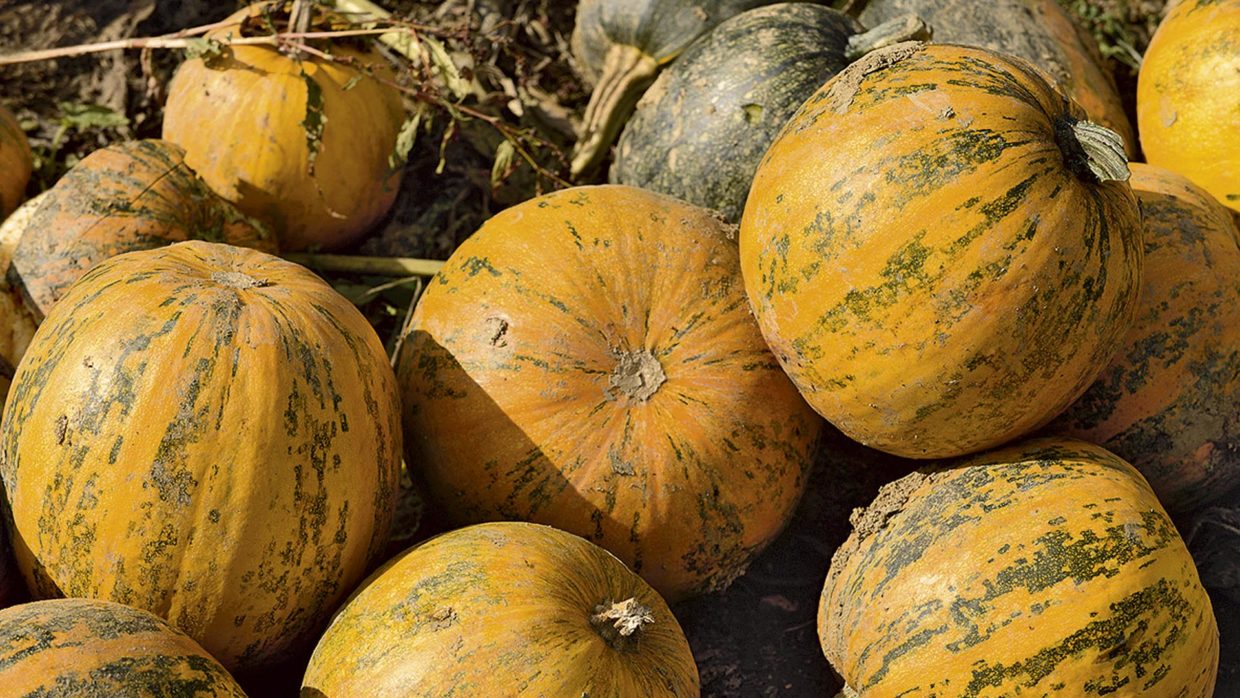 A festival for the eyes – ripe fruits in droves. 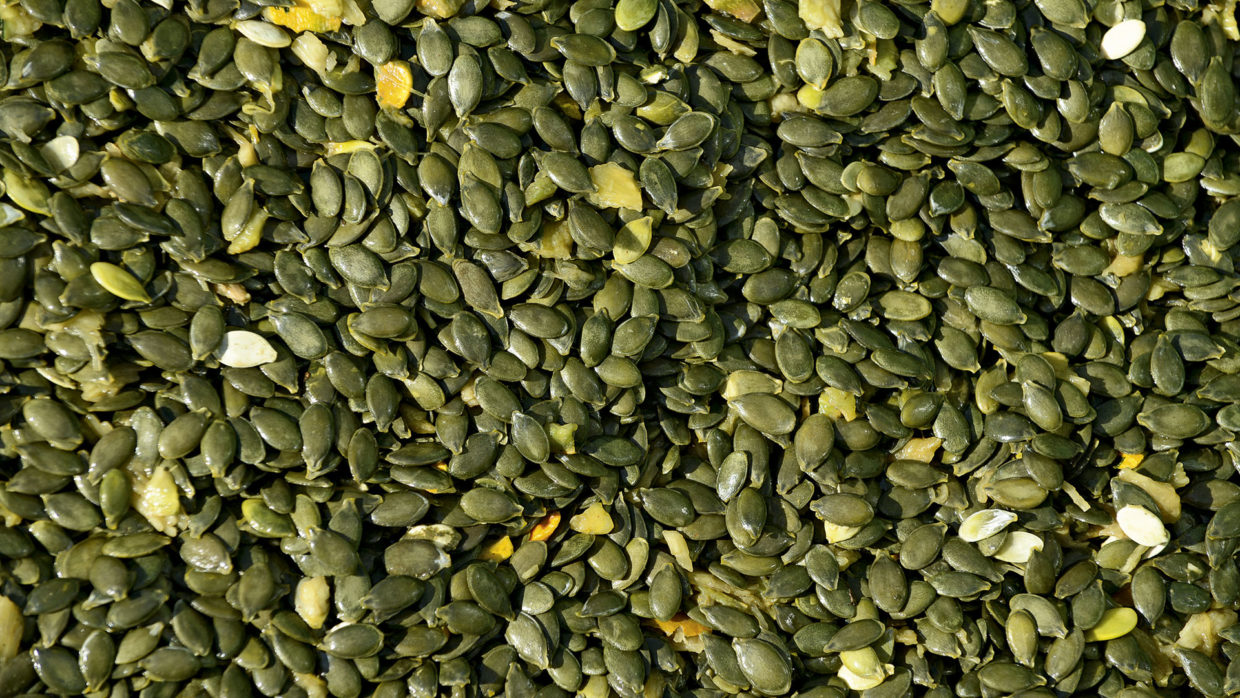 The seeds provide the valu­able oil – the green gold from Styria. 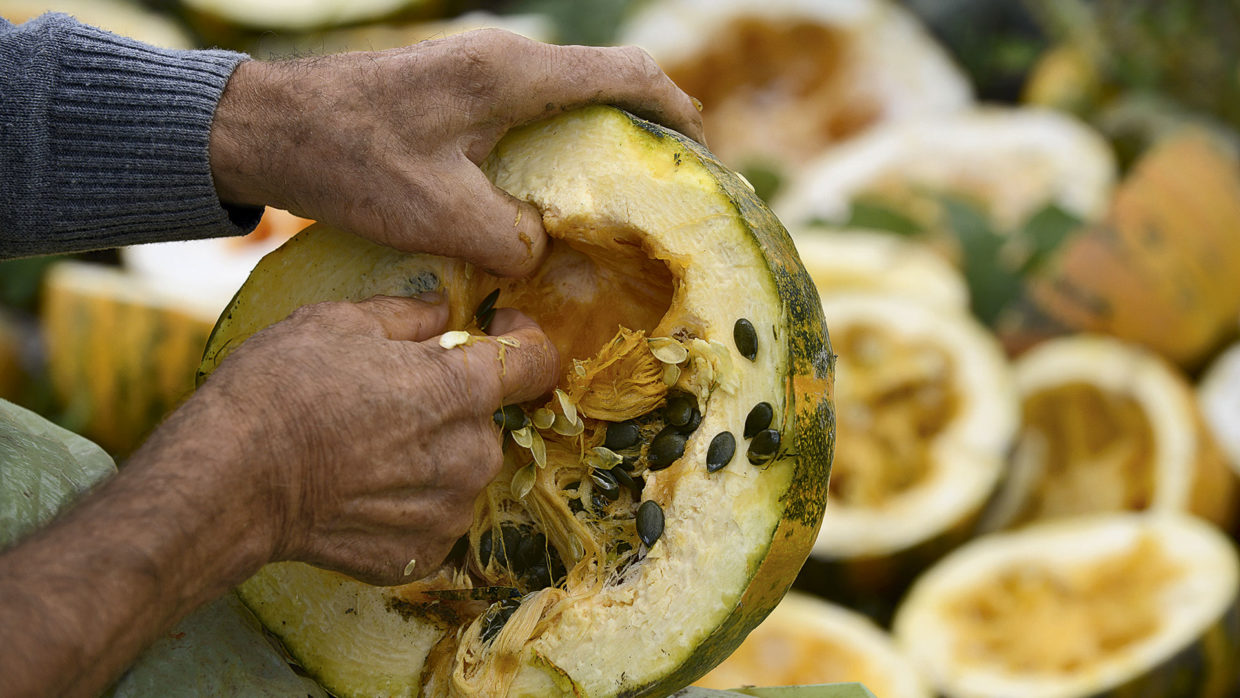 Common prac­tice in former times, today only a rarity – harvesting of the seeds by hand.

A secure source of income 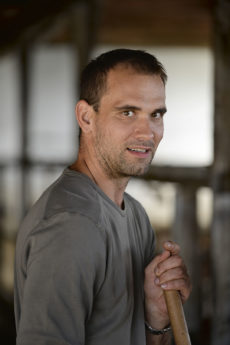 If the aroma of their pumpkin seed oil tastes anywhere near as good as their home-baked pastries this season, Monika and Johannes Klein will not have any diffi­culty in directly marketing their regional product again. At an alti­tude of 400 m the young couple operate a side­line farm in the Styrian commu­nity of Gnas. Their farm, which has an old orchard, where lilacs, pears, peaches, walnuts and apple trees grow, is situ­ated on the ridge of a frag­mented, hilly land­scape.

For the past ten years they also grow pump­kins. “The pump­kins only make up a small share of our turnover,” says Johannes Klein, who took over the farm from his parents as the youngest of seven chil­dren and works full-time at the Chamber of Agri­cul­ture. “Never­the­less, the fruit is a secure, addi­tional source of income for us with a high added value.” While the harvesting, pressing and bottling is all contracted out, after they have siphoned off 10 l oil for their own consump­tion, the Kleins carry out the direct marketing under the trade mark “100% Styrian pumpkin seed oil PGI”.

About 3,000 farmers , among them some who culti­vate up to 30 ha, culti­vate pump­kins in Styria. At least 75% of them are members of the Asso­ci­a­tion of Styrian Pumpkin Seed Oil “Protected Geograph­ical Indi­ca­tion”, PGI for short. Thirty of the mills where the seeds are pressed are also repre­sented. Only very few people involved “do their own thing”. The employees of the Asso­ci­a­tion of Styrian Pumpkin Seed Oil PGI keep a watchful eye to ensure that the Styrian origin is always clearly veri­fi­able and also complies with the quality criteria. Only then is the manu­fac­turer allowed to stick the band with the “PGI” endorse­ment to the bottle neck.

For Andreas Cretnik, Managing Director of the Asso­ci­a­tion, the regional origin, coupled with the local exper­tise, is vital to the 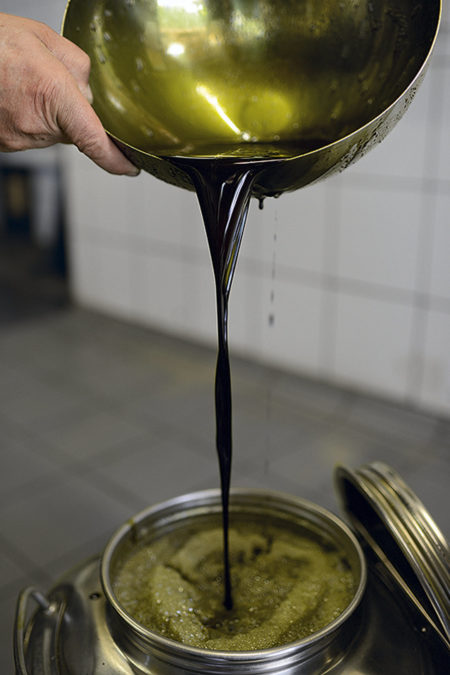 That is where the name green gold comes from. The colour of the oil glim­mers from black-green to a subtle olive-green.

image of Styrian pumpkin seed oil. It is the key to the further devel­op­ment of the valu­able regional product. “Our success is 50% based on good agri­cul­tural prac­tice, espe­cially during the harvesting time. A skilled hand in the drying, roasting and pressing of the seeds is also impor­tant; the rest is down to marketing.”

The Managing Director expects a future annual growth of 5%. In fact, more and more consumers, espe­cially from abroad – in Germany, France and Switzer­land – use Styria’s “green gold”. In order to ensure that the success is perma­nent, Cretnik has a flaw­lessly trans­parent proof of origin in mind: “At the moment, there are three different methods, which only deliver partial results. ” The declared aim is, in his words, by using an oil sample to be able to precisely estab­lish which area and which soil the pump­kins that produced the tested oil were grown in. Partic­u­larly since trans­parency is extremely impor­tant in these times of recur­ring food scan­dals.

An annual cham­pi­onship with big media coverage, where top chefs award the best farmers and proces­sors, draws pump­kins into the spot­light. The expert also readily points out the allergen-free nature of pumpkin seed oil; the addi­tion of arti­fi­cial addi­tives is taboo. The strong-tasting oil also suppos­edly has a vitamin E content five times higher than that of olive oil. Under­stand­ably, pumpkin seed oil promoters are trying to make the public aware of the health bene­fits of their prod­ucts with new studies. 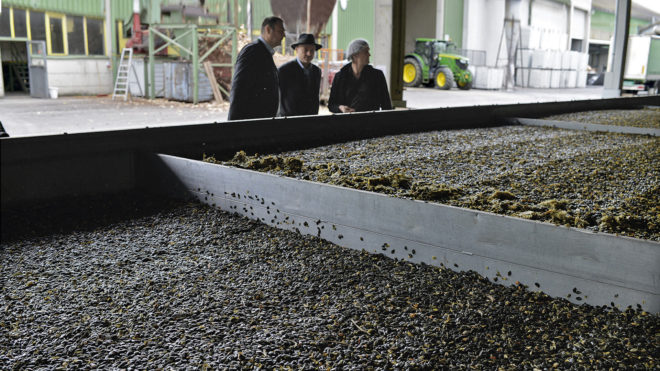 A view of the produc­tion process at the Steirkraft company. 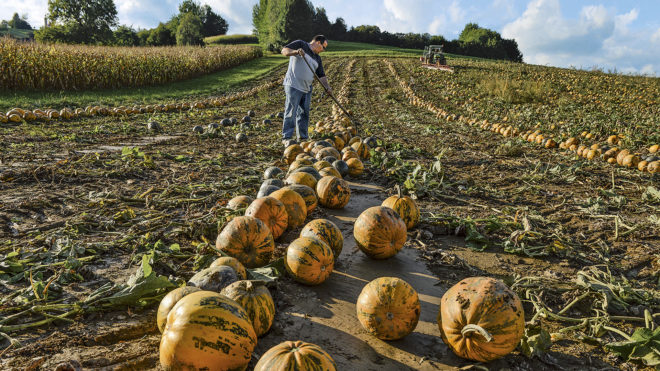 Self-promo­tion is part and parcel of the busi­ness. Farmers who inte­grate pump­kins into their crop rota­tions are pleased, as a higher aware­ness of the product beyond the borders ulti­mately means more demand. However, growing this plant from the cucumber family is not an agri­cul­tural no-brainer. Pump­kins need good, nutrient-rich soil and there is a lot of compe­ti­tion with weeds and grasses. It is also unfor­tu­nate that corn root­worm is nour­ished by the pumpkin blos­soms and there­fore threatens the corn that follows. A big problem for which, as of yet, there is no solu­tion.

However, the Styrian farmers continue to rely on their pump­kins and the cooking oil obtained from them. Pumpkin seed oil is to the Styr­ians what olive oil is to the Greeks, Ital­ians or Spanish. It is a fruit that symbol­ises the regional iden­tity and, more­over, embodies the distinc­tive flavour of Styria.

The oil pumpkin needs good soil and a lot of warmth. Approx­i­mately 18,000 plants flourish on 1 ha at a row spacing of 70 cm. The frost-sensi­tive seed is placed 3 cm deep; readily avail­able nitrogen is impor­tant for the begin­ning of the growth. Weeds and grasses gener­ally persis­tently compete with the cucumber plant. In a normal year, a pumpkin harvest of about 5 t/ha is expected. This provides about 500 kg of seeds which, with an oil content of 40%, produce about 200 l oil/ha. The price for 1 l bottled pumpkin seed oil is currently about € 17.