Small farmers can build a bridge with the public

Slovenia is a great example of why small farms should have their place within modern agri­cul­ture, next to bigger, more inten­sive oper­a­tions. They can meet the chal­lenge of rein­forcing dialogue between farmers and non-farmers and, in so doing, create new revenue models for farming.

In two weeks the pumpkin harvest will start again. Dušan Kos is looking forward to it. He just bought a new machine, which now shines in the sunlight in the farm­yard in Pragersko, a village in the North East of Slovenia, about 25km from Maribor. With this machine the harvest of his six hectares of pump­kins will go even more smoothly. It cost him about €5,000 (£4,237), but he was able to afford it because his wife, Brigita Hergan, receives a Euro­pean subsidy from the Young Farmers’ Scheme. If she works full-time on the family farm for three years, she will receive €45,000 (£38,137). It was a good moti­va­tion for the couple to change course completely.

Previ­ously, Mrs Kos’ family milked 60 cows and did some arable farming. Two years ago there was a big discus­sion within the family: Should they invest in a new milking parlour, at a time when the milk price was very low, or should they do some­thing else? Mrs Hergan and her husband saw a new future ahead of them: Processing their home-grown pump­kins and sunflowers into pumpkin and sunflower oil. “With six hectares of pump­kins and two of sunflowers, we’re not a big farm,” she says. “So, to ensure a good income, we need to add value to our prod­ucts.”

Her father gave her the oppor­tu­nity to start this new enter­prise and made space avail­able on the farm. Mrs Hergan went to the Slovenian Chamber of Agri­cul­ture for advice, and her husband, himself working five days a week as a factory manager, took care of the tech­nical aspects. He built a processing room and figured out how to turn pump­kins into high-quality cold-pressed oil. 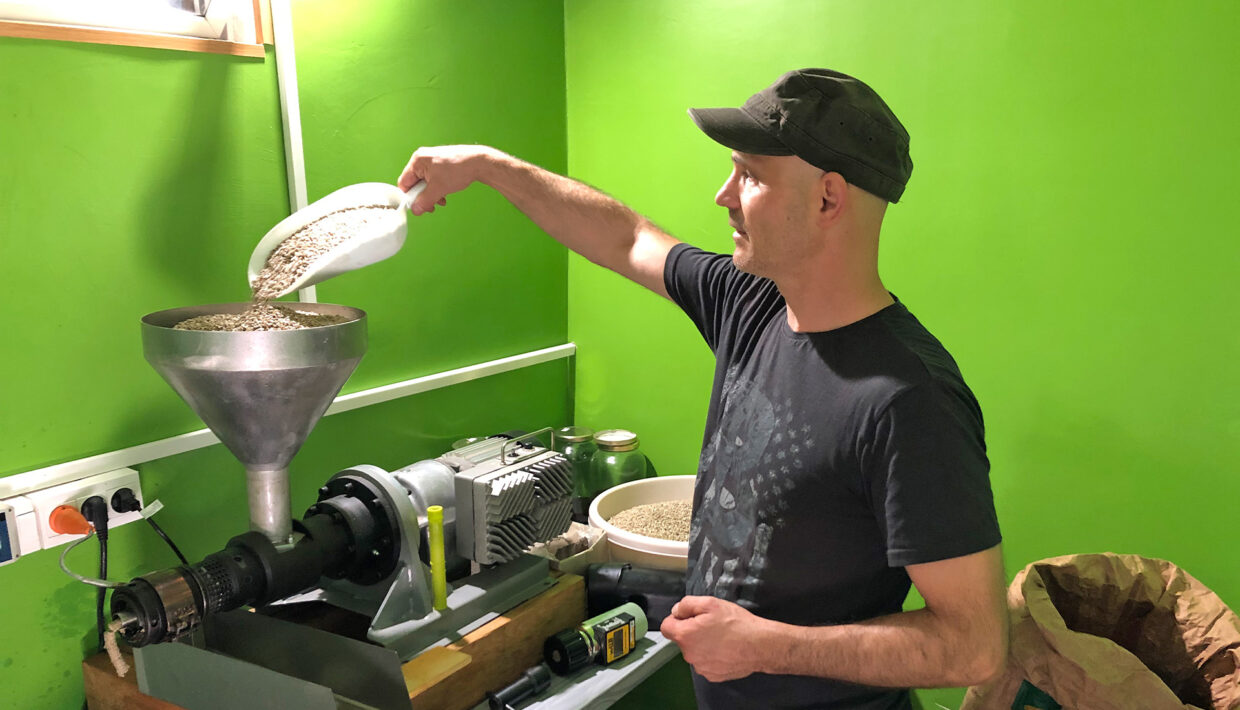 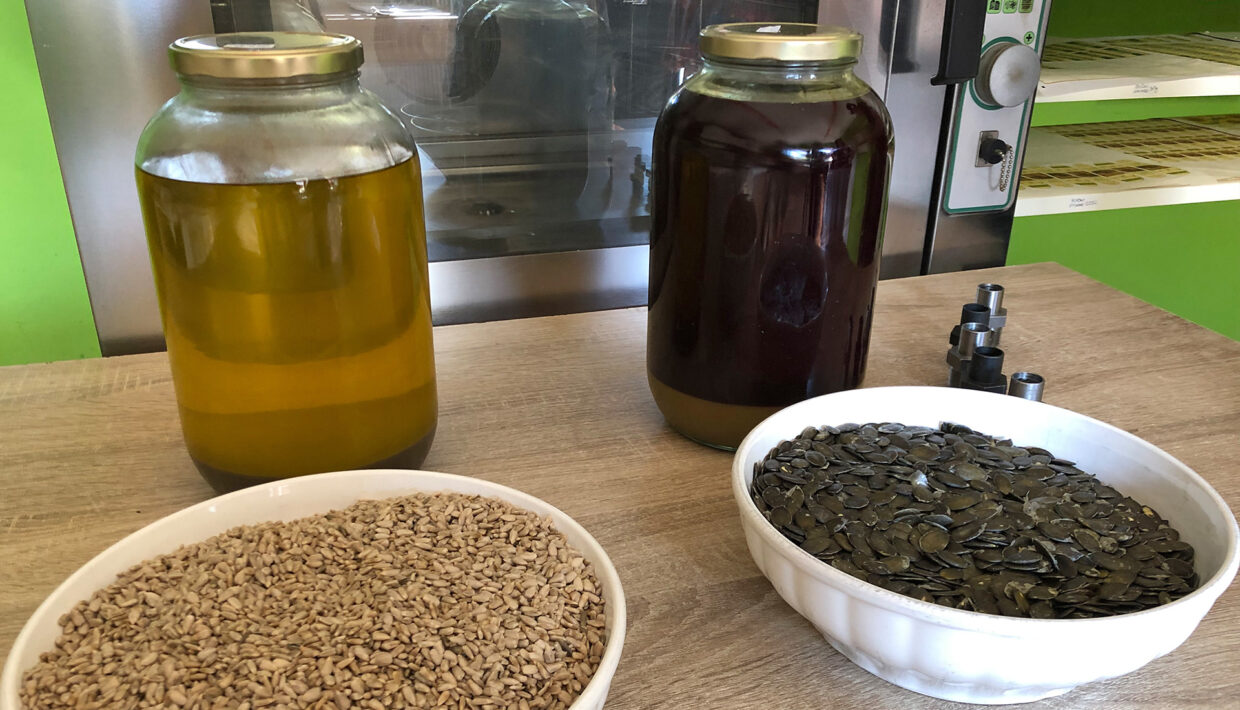 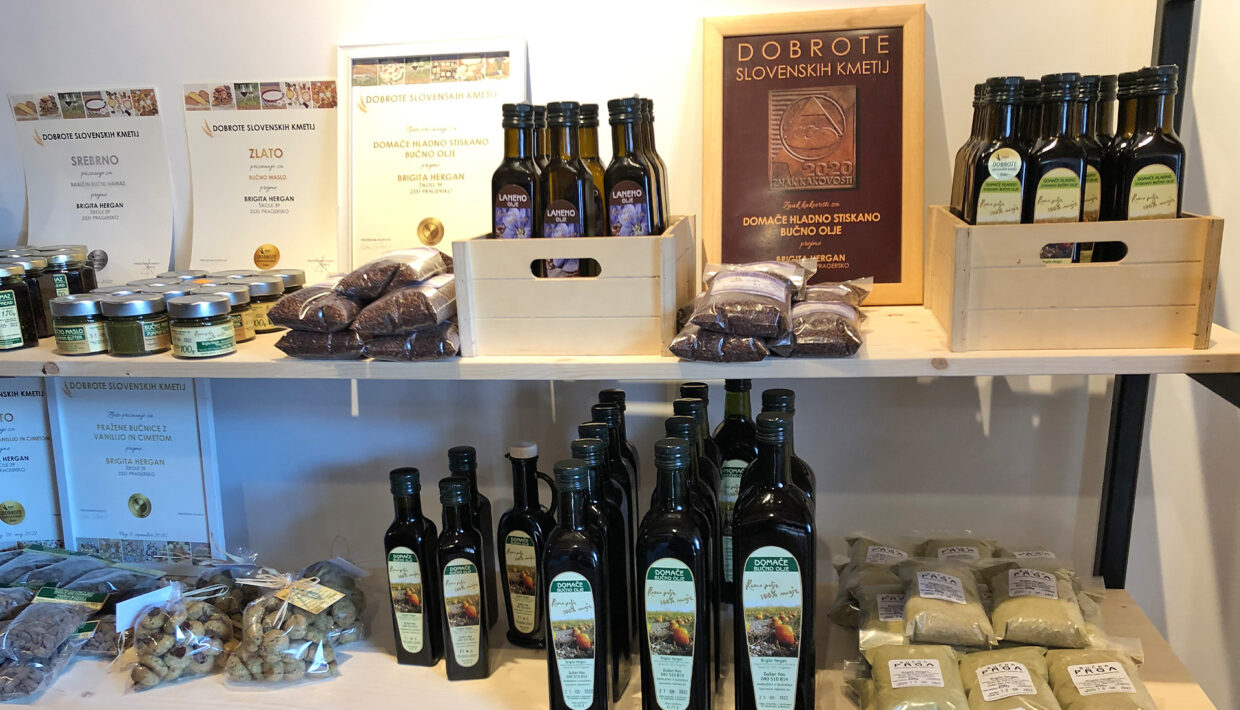 All prod­ucts are also avail­able for purchase in their own farm store.

The cows are gone now. Mr Kos converted the stable and installed a heating system, which enables him to dry the seeds and heat the house. It cost him €25,000 (£21,176). “There are also other drying facil­i­ties around here, but as a grower you can become too depen­dent on them. I want to be able to dry my seeds when I want to. If they are left too long, it doesn’t do any good for the quality.” Now they produce 3,000 litres of pumpkin and 1,000 litres of sunflower oil a year, which they sell at farmers’ markets and in their own farm shop, which has given them a good connec­tion with the local area. Mr Kos says: “That connec­tion is crucial for us. We want to bring good quality prod­ucts into Slovenian house­holds.”

The couple are not the only farmers who, as small producers, want to build a connec­tion with their local commu­nity. For many small farmers, that connec­tion is key to surviving among larger farms. During the Euro­pean agri­cul­ture minis­ters’ summit in early September 2021, the Euro­pean Commis­sioner for agri­cul­ture, Janusz Wojciechowski, indi­cated that extra atten­tion should be paid to the 10m small farmers in the Euro­pean Union. “Economies of scale will continue, but it is precisely the small farmers who are impor­tant for main­taining the coun­try­side,” he said. “The EU will there­fore have to support these farmers finan­cially.”

Yet the ques­tion is whether this finan­cial aid is enough. The Euro­pean coun­try­side is under pres­sure, which of course isn’t only linked to farms getting bigger. Housing, infra­struc­ture, investors; all these key players covet land, causing prices to skyrocket.

Small farmers are indis­pens­able for the preser­va­tion of rural areas.

In Italy, internet company Amazon recently bought several hundred hectares of fertile farm­land near Bologna to build a new distri­b­u­tion centre. In the Nether­lands, investors are trying to acquire agri­cul­tural land on which to build solar parks. In Germany, city dwellers are looking for recre­ational oppor­tu­ni­ties outside the city, parking their cars in impos­sible places along rural roads, preventing farmers from doing their work with trac­tors and machines.

In addi­tion, in many Euro­pean coun­tries; partly as a result of the COVID-19 pandemic, there seems to have been a migra­tion from the city to the coun­try­side. Citi­zens are looking for space and quiet in rural areas, which is changing the social struc­ture enor­mously.

These changes come with an increase in neigh­bour­hood conflicts. French agri­cul­ture minister Julien Denor­mandie commented: “Urban­ites don’t know how things work in the coun­try­side, so we have to explain that. We have to seek dialogue and, in my opinion, agri­cul­ture is the answer. By bringing farming closer to the rest of the popu­la­tion again, through the sale of local prod­ucts for example, we can close the gap between the city-dweller and the farmer.”

Seal of approval as a mark of quality

That is what many small Slovenian farmers are trying to do. For 32 years, the monastery in the country’s oldest town, Ptuj, has been hosting a farmers’ festival every year: Dobrote sloven­skih kmetij. Farmers sell their own produce here, but perhaps more impor­tantly, there is a compe­ti­tion. This year, 500 farmers from all over the country submitted 978 prod­ucts, which are judged in 15 different cate­gories. The winners get to label their prod­ucts for a year and the winning prod­ucts are sold online on the festival website. Marija Erjavec’s apple cider is one of them. It makes her proud: “The quality mark gives customers confi­dence. It shows that it is of good quality.” 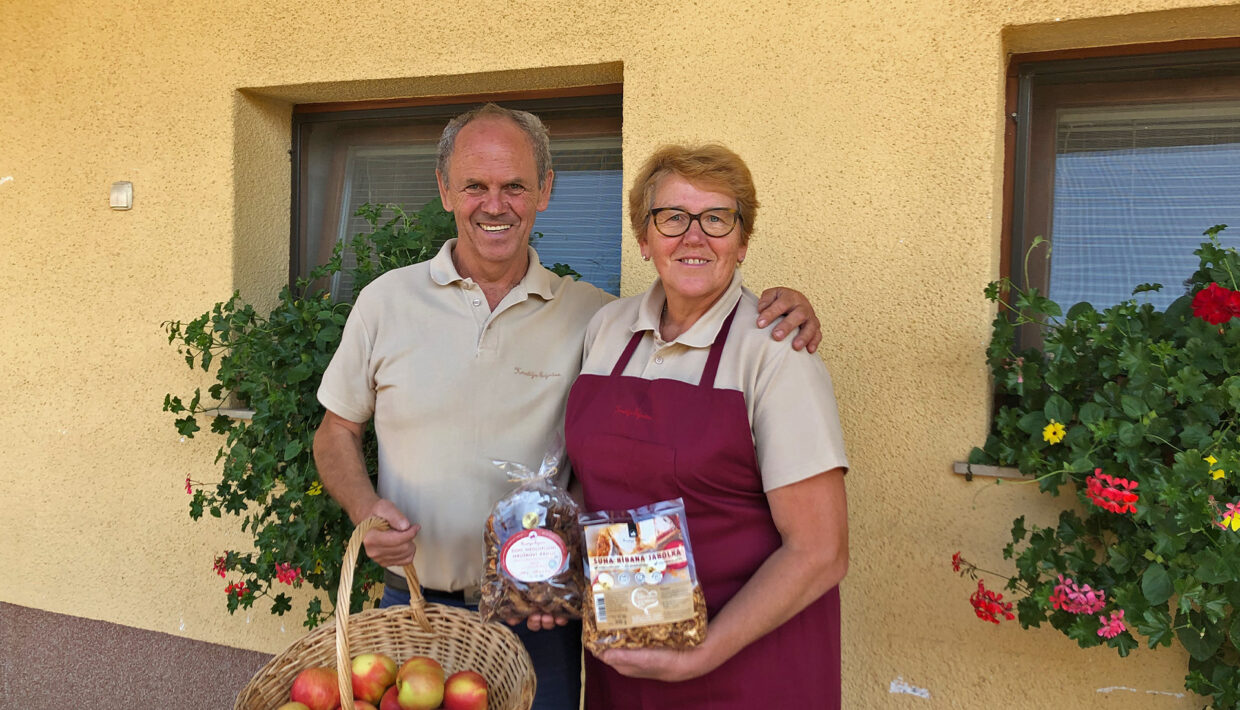 Marija Erjavec and her family grow almost exclu­sively apples on their farm. Here they show their award-winning prod­ucts. 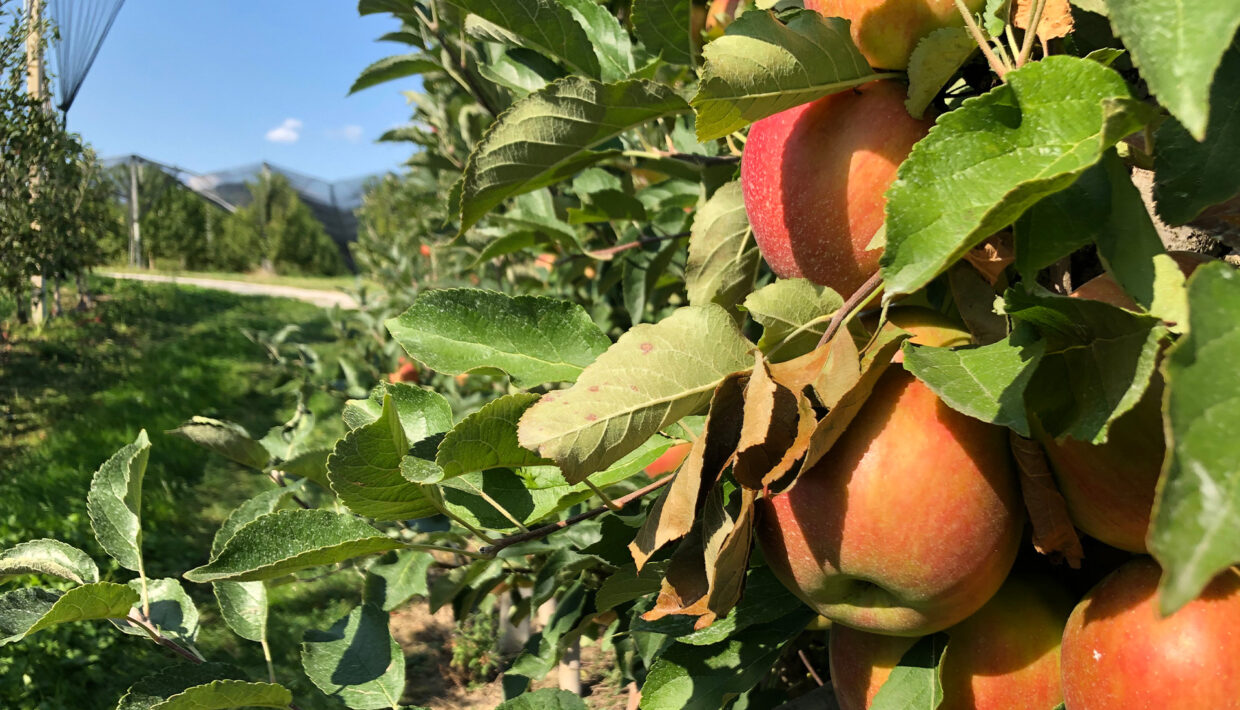 They now produce 90 tons of apples a year. 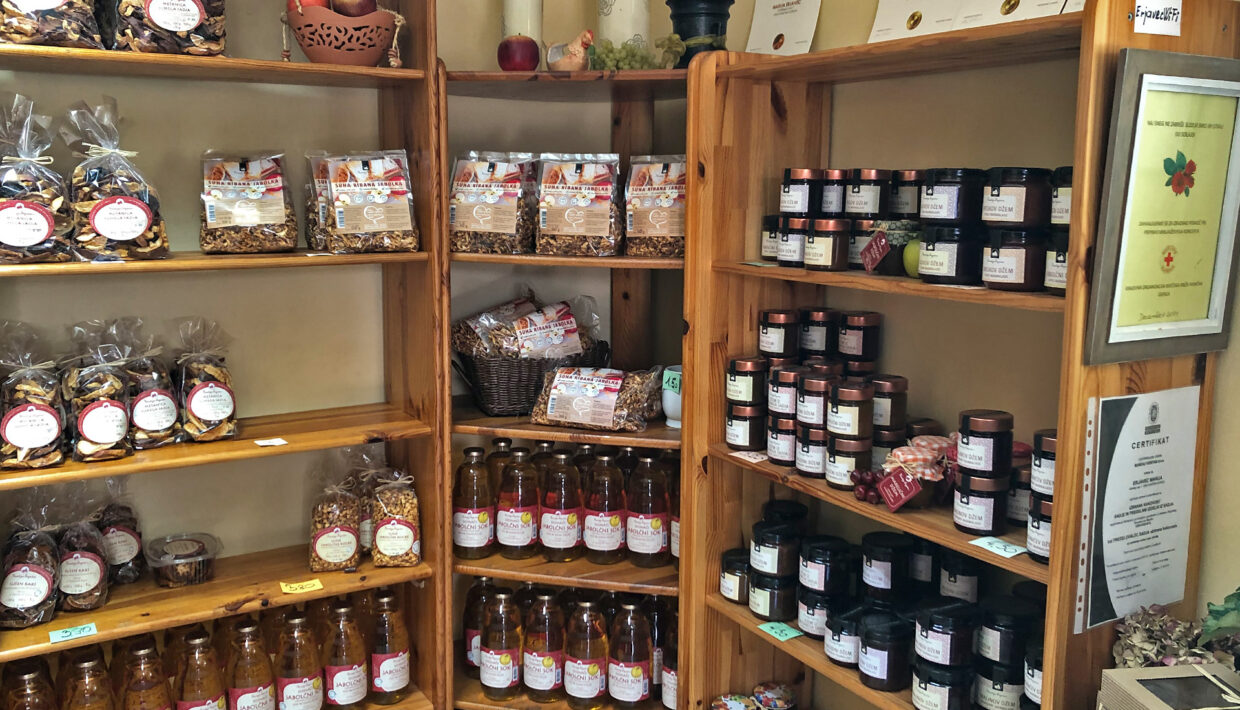 The farm store sells all kinds of home­made prod­ucts such as dried fruit and apple cider vinegar.

Together with her husband and son she runs a small fruit farm in Gorica, a village about 50km north of the capital Ljubl­jana. The farm consists of four hectares of apple trees, four hectares of arable land and 11ha of forest. They were pioneers in fruit farming in the early 1990s. “This region tradi­tion­ally has no fruit cultivation at all, but at the time we only had two hectares and in order to get as much product from it as possible, we decided to plant apple trees,” Mrs Erjavec explains. “They produce more per square metre than pota­toes.”

Now they produce about 90t of apples per year. They process these into all kinds of prod­ucts, including dried fruit and apple vinegar. They also purchase pears, which they process in different ways. “We sell every­thing at local markets or speciality stores,” says Mrs Erjavec. “The farm shop has been there for 10 years. We were already at farmers’ markets, but people were calling to buy prod­ucts at home as well,” she adds. “So, we started a shop. In the begin­ning we sold 80% of our prod­ucts at home. Now it’s only 20%. Nowa­days more and more compa­nies ask for gift pack­ages with local prod­ucts. We jumped into that gap in the market too and it’s paying off.”

The country is committed to improving commu­ni­ca­tion between urban and rural areas and expressed this during Slovenia’s EU pres­i­dency which ran from July to December 2021. “There are conflicts,” admits Slovenian minister of agri­cul­ture, forestry and food, Jože Podgoršek.  “These arise mainly during farmers’ daily work. Non-farmers, for example, complain about lots of trans­port move­ments and about noise pollu­tion. During our pres­i­dency, strength­ening the dialogue between farmers and the non-rural envi­ron­ment was a top priority. We wanted to do some­thing about that.”

The Slovenian Chamber of Agri­cul­ture plays a crucial role in this. It repre­sents 100,000 members, who work an average of eight to 10ha of land. The chairman, Roman Žveglič, is a small moun­tain farmer himself. He has 25ha of land, of which five is arable land. He also keeps 33 steers and 23 suckler cows in the Slovenian moun­tains. He explains the sticking points: “Agri­cul­ture is like foot­ball. Everyone thinks they know what’s what and acts like a foot­ball coach. The public wants safe, local food, without chem­i­cals and pesti­cides, but they also want it cheap. These things do not go together. We need to explain that story more. I think that the small farmers in our country have an impor­tant task in this, because they are the ones who are close to the people around them.” 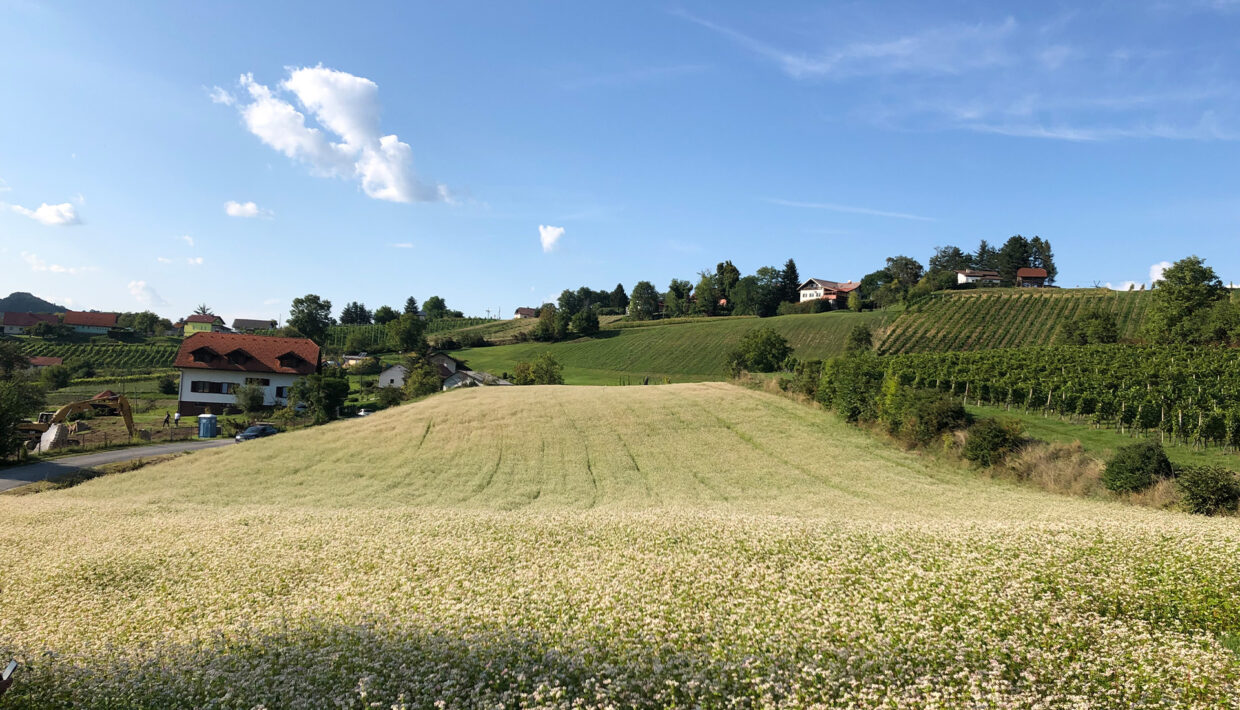 The Slovenian Chamber of Agri­cul­ture repre­sents 100,000 members, who work an average of eight to 10 hectared of land and supports them among other things in devel­oping new concepts for their farms.

Slavica Strelec works for the Chamber of Agri­cul­ture in the Slovenska Bistrica region. She and her regional team guide small farms in setting up new income streams. “They come to our office and together we look at what the possi­bil­i­ties are, in terms of tech­nology, loca­tion and ensuring quality,” Ms Strelec explains. “In addi­tion, we help farmers to obtain the right docu­ments and papers to be able to process and sell prod­ucts. This is a great oppor­tu­nity for smaller farmers to remain farming in a world that seems to be all about economies of scale. Secondary activ­i­ties are the only way to keep a small farm going.”

For Dušan and Brigita, this seems to have succeeded. After many invest­ments and reno­va­tions, their busi­ness is now firmly planted in the Slovenian soil. Sales are booming. Other farmers in the area now ask the family if they can dry their seeds or offer their prod­ucts for processing. Mr Kos points to the new recep­tion area for visi­tors and is visibly emotional. “I never expected that we could build this up from just a small farm. But we did it,” he says, beaming. “This gives our family busi­ness a future again.”

Slovenia, offi­cially the Republic of Slovenia is a country in central Europe at the southern edge of the Alps and became a member of the Euro­pean Union on 1 May 2004. Slovenia has used the euro as its currency since 2007. It is bordered by Austria to the north, Italy and the Adri­atic Sea to the west, Croatia to the south and east, and Hungary to the north-east. The country is small, densely forested and moun­tainous. The capital and largest city is Ljubl­jana and has a popu­la­tion of 286,745 (2020).

Agri­cul­ture is becoming less and less impor­tant to the Slovenian economy. In 2017, it contributed only 1.8% to the gross national product and only about 5.5% of the work­force was employed in this sector. As a result, Slovenia has become a net food importer. Farms are gener­ally family farms with an average size of eight to 10ha which that are often affil­i­ated to a co-oper­a­tive. 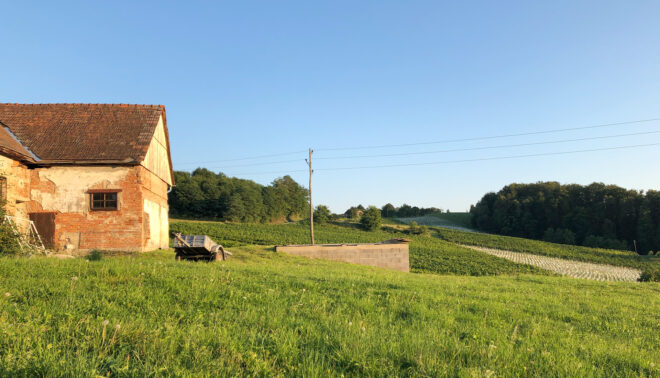 Due to the climate and soil condi­tions, the agri­cul­tural land consists mainly of grass­land. About 250,000ha are suit­able for arable farming and horti­cul­ture and the main prod­ucts are fruit, wheat, maize and pota­toes. About 21,000ha are used for viti­cul­ture.

Farmer Thomas Björk­lund in Sköldinge, Sweden, previ­ously pioneered farm prac­tices which have become estab­lished trends. Now, he has teamed up with medical doctor Kerstin Fred­lund to turn indige­nous grain vari­eties into super­food via a hydrothermal process.﻿