New life out of old soil

“Agri­cul­ture plays a major role in the overall devel­op­ment of this region,” empha­sises Ivan Pavlović from John Deere dealer Novo­com­merce Inter­na­tional in the Croa­tian town of Osijek. Around 30km from the Danube and neigh­bouring Serbia on the Euro­pean Union’s eastern border, the mid-sized town is located only a few kilo­me­tres away from farmer co-oper­a­tive Fermopromet’s base in Bran­jina.

In co-op owner Siniša Ćuk’s office we take a shot of quince liquor to start off the day’s proceed­ings. The self-distilled liquor is excel­lent – but one shot is enough at that time of the day. Mr Ćuk and his 50 employees farm around 3,000ha in Croatia and a further 3,000ha over the Croa­tian-Serbian border in Vojvo­dina.

At the farm, they follow a classic crop rota­tion: Wheat, barley, maize and rape­seed. Rape­seed has been scarce in 2021 because of prob­lems with herbi­cide approvals, says Mr Ćuk. “But wheat and maize are doing all the better for it. This year we’re harvesting up to 13t/ha of grain maize.”

Soyabeans, which he has been growing since the 1980s, also seem to be doing well. “Right now we’re expecting prices of around €700/t (£597/t),” Mr Ćuk boasts outside the company’s soyabean silos. Here, their soyabeans, not yet traded as “Donau-Soja”, are being dried and stored until a favourable sales date presents itself. 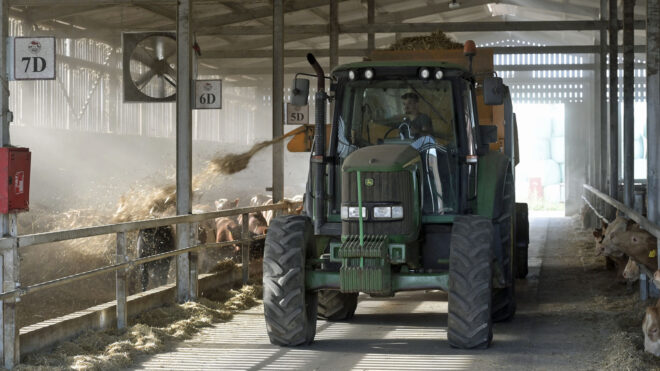 In the vicinity of Visnjica, on a former estate of the Princely House of Schaum­burg-Lippe, there is now a large cattle ranch

While large arable farms like Fermo­promet are currently bene­fiting from rising commodity prices, rural dairy farms like Ivan Kvetek’s in Gorica face precisely the oppo­site problem: Milk prices have remained low for several years. This is one of the reasons why many dairy farmers have given up milk produc­tion all together. Zdenko Ivkić of the Croa­tian Agency for Agri­cul­ture and Food (HAPIH) esti­mates that about a third of all dairy farms have given up milking in the past 10 years. As a result, there are only 4,000 dairy farms still producing milk in Croatia, approx­i­mately 800 of which are found in Slavonia alone. An addi­tional 10,000 part-time farms exist, but they only produce enough to meet their own and local needs. 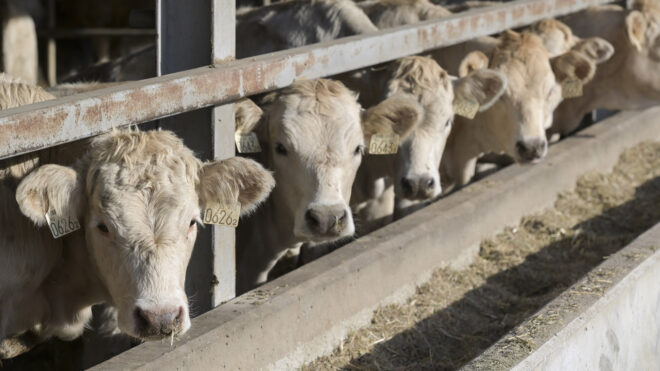 And there are no signs to suggest that the situ­a­tion will improve any time soon. After the very dry and hot summer of 2021, the price of milk is a mere 31c/litre (26.5p/litre). “Maybe we’ll get 38c (32.4p) this winter,” Mr Kvetek remarks, as he gives us a tour of his farm to which he relo­cated several years ago. Together with his father, he farms around 100ha, 15ha of which are dedi­cated solely to sunflower cultivation. He even hires a combine specif­i­cally for sunflower threshing.

As staple feed for the cows, Mr Kvetek relies mainly on alfalfa hay. Large bales of the stuff can be seen stacked beneath semi-circular tents that he threw up himself behind his cow barn. In passing, you can’t help but notice that his herd of 40 cows, the sturdy local Simmental breed, seem full of life. The cows are kept in a modern barn with pushrod manure removal and are milked by a Lely robot. “We are very satis­fied,” Mr Kvetek says when asked about the robot.

Elec­tricity from own PV system

Half the costs of this proud purchase were covered by the Croa­tian state. And the elec­tricity require­ments are covered in large part by the farm’s own 35kWp solar PV system installed on the barn roof. The system has signif­i­cantly reduced input costs: Instead of paying 17c/kWh14.5p) to the Croa­tian grid oper­ator, the 41-year-old only has to pay around 7c/kWh (6p) in produc­tion costs for his own solar power.

Along with family busi­nesses like Mr Kvetek’s, big names in the Slavonian dairy industry, as well as in other regions of Croatia, have made the move to auto­matic milking systems: Now around 50 farms in Croatia use robots.

Although geograph­i­cally and histor­i­cally different, they all have one thing in common: A shared past as a part of socialist Yugoslavia, which came to an abrupt end in the summer of 1991 and led to a complex civil war. To this day, the wounds of the conflict have not yet completely healed. Partic­u­larly in eastern Croatia, the houses where many Serbian fami­lies once lived remain empty. Many of them left their old home­land and moved to Serbia. In many places, bullet holes from the warring factions’ machine guns can still be seen in walls and doors. 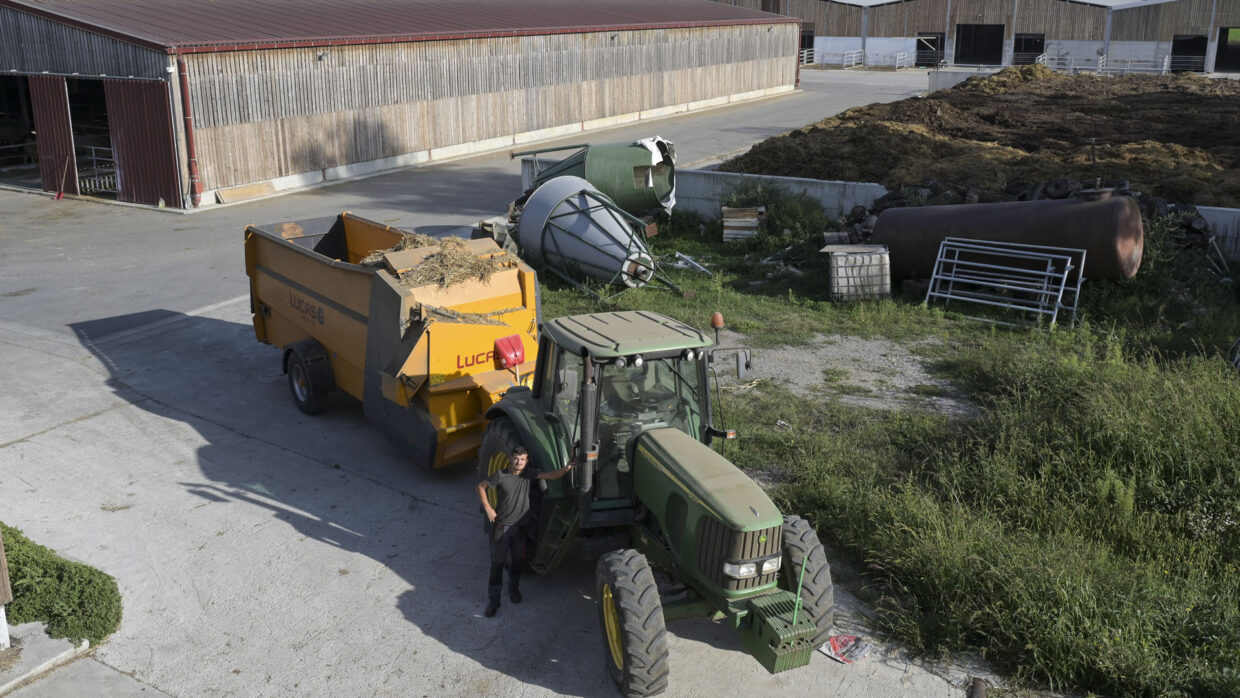 … even on the beef rearing farm in Visnjica, nothing works without good agri­cul­tural tech­nology in green and yellow 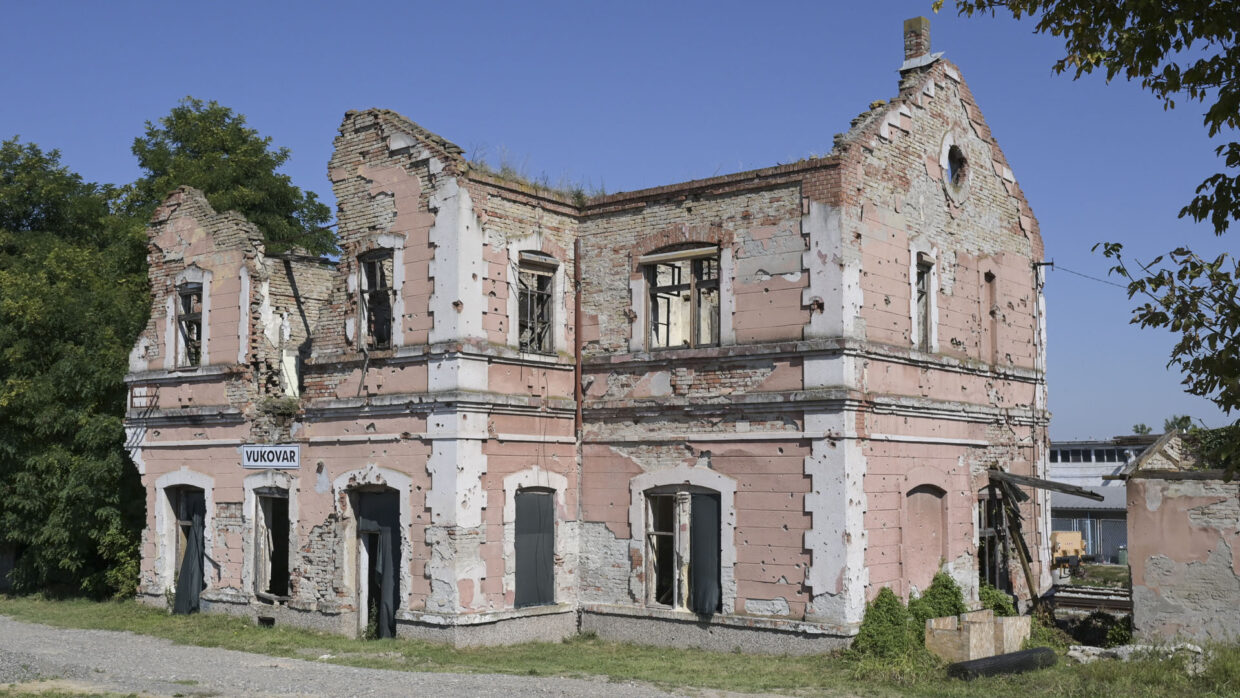 Unmis­tak­able: The traces of the war are still clearly visible today. The old train station in Vukovar directly on the Danube proofs it; armed conflicts between Croats and Serbs took place here in the autumn of 1991 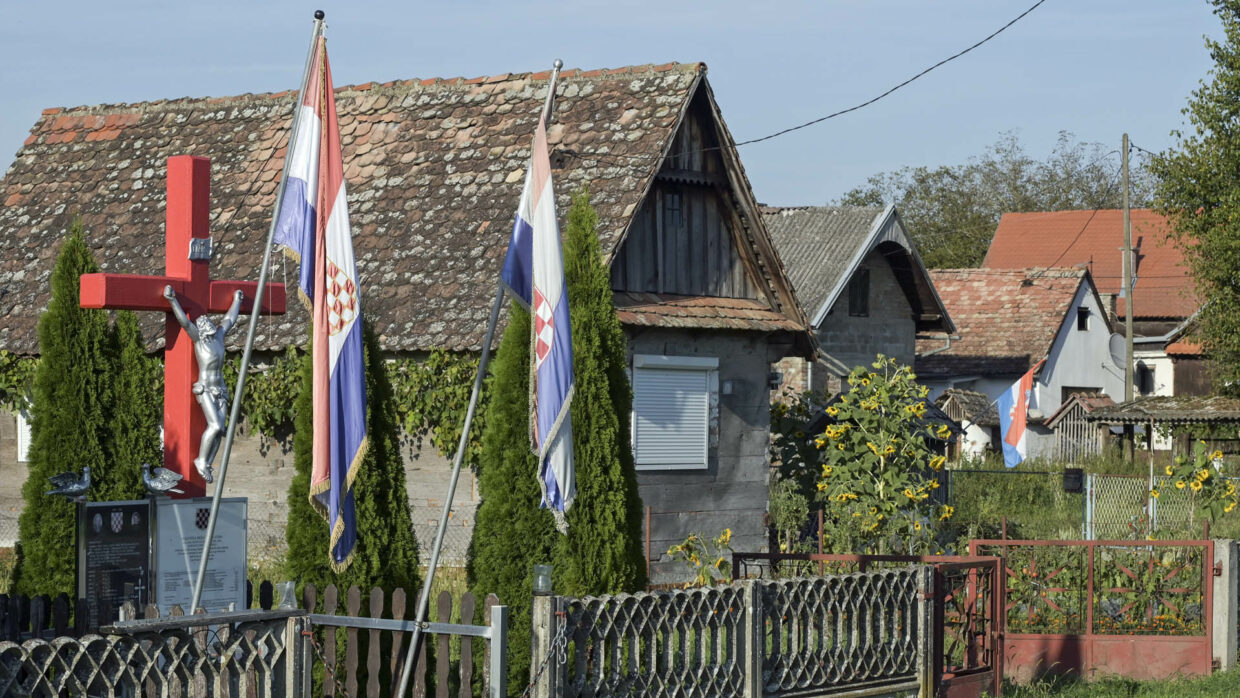 Tradi­tion­ally, subsis­tence farming is prac­ticed in Slavonian villages, the field is right behind the house.

The phys­ical scars of war remain, just as the former socialist system has left its mark on rural areas. Similar to Eastern Germany, some of the large, formerly state-owned agri­cul­tural enter­prises in Croatia have managed to over­come all kinds of change and survive in a market economy. Conglom­er­ates have been formed from their ranks which, in addi­tion to their partic­i­pa­tion in other indus­tries, now have their own agri­cul­tural busi­ness branch.

A good example of this is the Žito Grupa, which runs a dairy farm with 800 Holstein Friesian cows in Mala Bran­jevina on the site of an old agri­cul­tural co-oper­a­tive. For the past four years, the farm work has been comple­mented by an impres­sive 4MW biogas plant. “Every company should set up a plant like this,” grins Jakob Zvonarić, who’s respon­sible for the biogas plant. “This place has a future,” the 22-year-old machinist says opti­misti­cally.

Dražan Tomanovič, the veteri­nary tech­ni­cian who looks after the cows’ and calves’ health as part of the farm’s 25-person team, also feels right at home on the farm. “I like working with the animals,” he says in fine German, a language the 44-year-old learned having spent his child­hood in the south­western German state of Baden-Würt­tem­berg. He would never swap it for a job in industry. 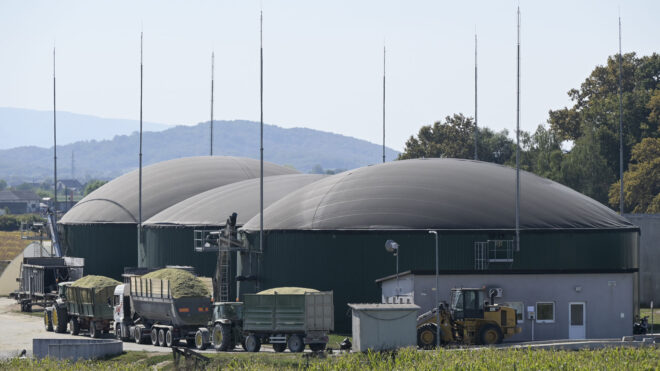 On the way to Croatia’s largest potato farm in the northern region of Međimurje near the Hungarian and Slovenian borders, we pass many small tobacco fields and remote vine­yards, as well as some new biogas plants. September is harvest time. High-horse­power trac­tors with large, brand-new grain carts drive freshly harvested maize from the fertile fields to the biogas plants.
One of these plants is located near the city of Slatina. “Our plant went into oper­a­tion five years ago, but the accep­tance of biogas is close to zero,” reveals plant manager Josip Butka. He reports that about 200ha of maize are deliv­ered to the plant; about 25,000t. When asked to describe his own company, the fully qual­i­fied elec­trical engineer’s comments are more or less repre­sen­ta­tive of the greater situ­a­tion in the heart­land of Croa­tian agri­cul­ture: “We are an old company, but with young invest­ments.”

Our plant went into oper­a­tion five years ago, but the accep­tance of biogas is close to zero.

Having recently joined the EU and with the Euro soon to be intro­duced as the country’s offi­cial currency, part of the younger gener­a­tion is now looking for new ways to reshape life in rural areas for the better and to put the country’s past behind them. But this is an ambi­tion which is not without its diffi­cul­ties – espe­cially since farm wages are still very modest in many places. It’s for this reason that many young people still decide to leave their rural home­towns – going to Zagreb or the Adri­atic, where tourism offers numerous job oppor­tu­ni­ties.

With the modest pay, it’s not partic­u­larly surprising that near to Visnjica, in an area where the royal house of Schaum­burg-Lippe farmed large estates prior to World War I, it is a team of Nepalese farm hands from Kath­mandu who feed and muck out the animals on a large beef fattening farm. They quite clearly excel at their job, as the Limousin, Charo­lais and Simmental bulls bedded on straw in the six new open sheds all appear to be in prime condi­tion. 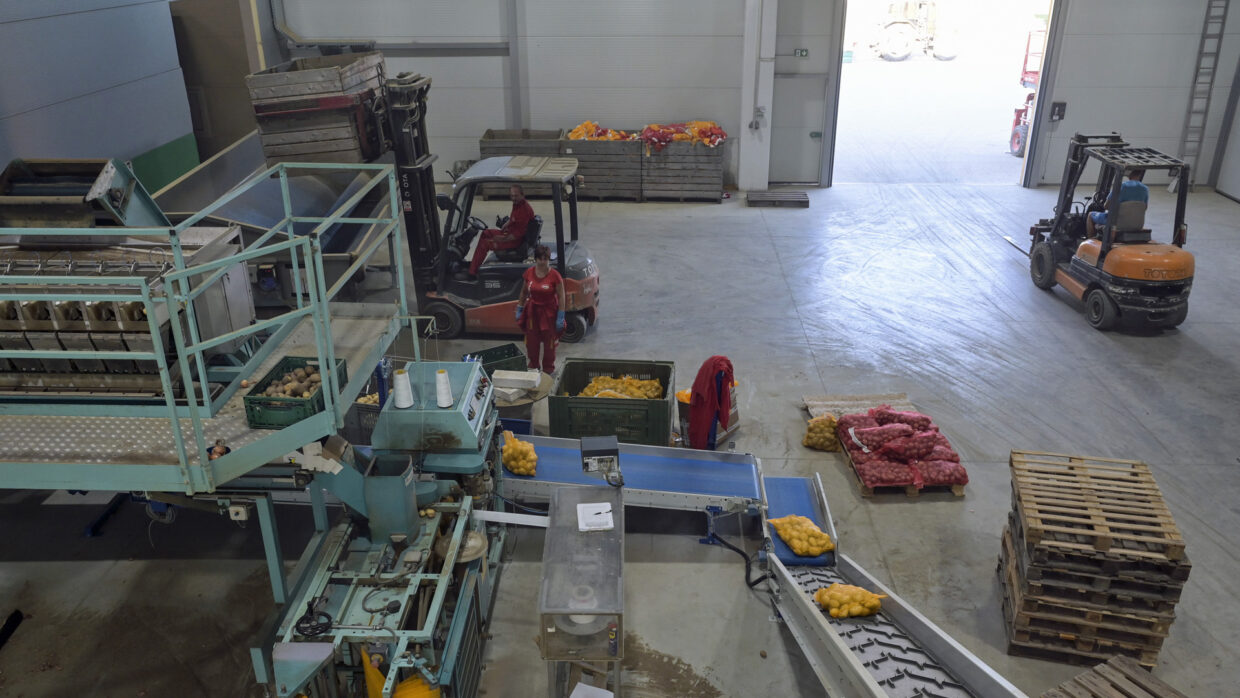 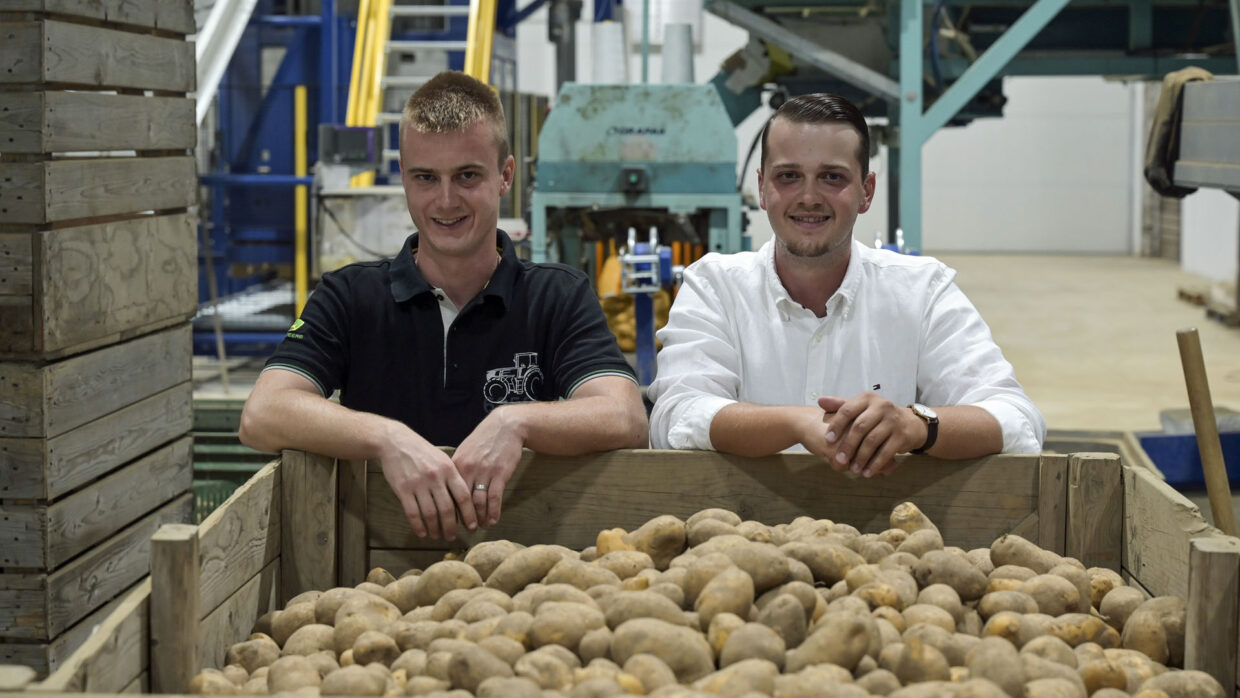 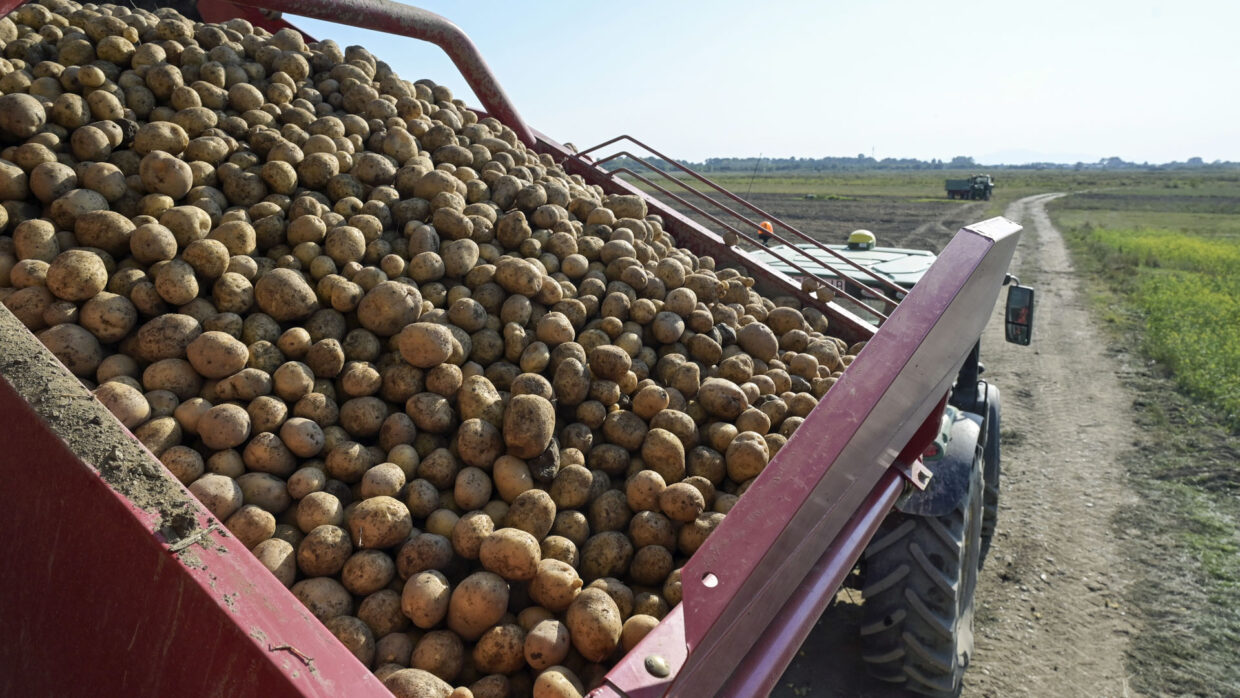 Potato harvest in a field in northern Croatia.

Pota­toes in the “Switzer­land of Croatia”

After arriving in Međimurje, a region which some people call the “Switzer­land of Croatia”, first up is a visit to a potato farm. It’s a dry day and all of the potato harvesters are out in the fields at the Dodlek family farm. “Our grand­fa­ther started doing some farming around the house during the socialist era back in 1961,” says Andrija Dodlek. The famer proudly recounts the humble begin­nings to a busi­ness that today harvests, stores, packs and markets up to 18,000t of pota­toes a year.

To cope with the high demand, Andrija, his brother, Karlo, and their father, Mirjan, have in recent years invested millions of euros in harvesting equip­ment, irri­ga­tion, ware­houses and auto­matic packing machines. They clearly aren’t shy to take risks with their company, Dodlek-Agro, in the village of Belica. The family grows eight vari­eties of pota­toes on their 115ha of land, while also closely co-oper­ating with 30 other compa­nies in the wider Belica area. Collec­tively, these compa­nies, whose indi­vidual farms range from 15-75ha – culti­vate around 500ha of pota­toes in total. Once harvested, they deliver the pota­toes to the Dodleks, who then pack and market them under their brand. Some 50% of pota­toes grown in Croatia now come from these fields. The company also exports to the Ukraine, Serbia, Bulgaria and Hungary, among other coun­tries.

There is a great sense of opti­mism at the company about what the future might hold. It’s for this reason that spirits at the company remain high despite the numerous setbacks brought about by Covid-19. This is not only clear to see on the faces of the family members who run the busi­ness, but also on the faces of the farm workers, who are happy to share a beer with one another during breaks from the harvesting work.

There is also a clear allo­ca­tion of tasks among the company owners. While Karlo is in charge of all things agri­cul­tural, the younger Andrija, who, among other things, studied economics in Budapest, takes care of the money side of the busi­ness. In spite of the company’s success, he has remained humble and, with his brother, is constantly looking for new ways to improve the busi­ness further. The two are currently consid­ering the possi­bility of intro­ducing a solar power storage system and new crop storage capacity, as well as starting to grow celery and onions. Andrija is also keen to purchase a new potato harvester capable of extracting even the smaller pota­toes from the stony soil.

Inde­pen­dent of his own agri­cul­tural enter­prise, Andrija hopes that Croatia – and in partic­ular eastern Croatia, the “heart­land of Croa­tian agri­cul­ture” – will enjoy more agri­cul­tural economic renewal with the intro­duc­tion of the Euro. When asked what he would think if neigh­boring Serbia were to one day become a member of the Euro­pean Union, Andrija, a fervant EU supporter, made his stance very clear: He would certainly welcome it.

If you always fight weeds with the same herbi­cide, you will prob­ably soon be faced with a resis­tant popu­la­tion. Arable farmer Wilhelm Heine from Baden-Würt­tem­berg knows that this is not fun. Four types of sustain­able herbi­cide resis­tance manage­ment helped him to get black­grass, which had become resis­tant on some of his farm­land, under control again.﻿

A lot has happened on farms in recent years in terms of digital moderni­sa­tion. Although it is diffi­cult to predict where all these complex devel­op­ments will lead, new options are emerging for many farms to meet future chal­lenges. ﻿