This inno­v­a­tive tech­nology is providing a “clean” solu­tion for the protec­tion of vines – and will soon do the same for other crops.

It all started in 2015: Researchers Laurent Urban and Jawad Aarrouf from the Univer­sity of Avignon, France, proved that plant defence mech­a­nisms against certain pathogens can be enhanced by UV-C flashes. They further devel­oped their system and regis­tered their first patent in 2015. Two years later UV Boosting was founded in collab­o­ra­tion with Yves Matton from Tech­no­founders.

“Around 40 machines already operate in France, mainly in vine­yards. UV flashes leave no residue. This is of partic­ular interest to wine­makers because they care about the envi­ron­ment and want to leave the vines untreated while complying with all regu­la­tions. But how exactly does the system work? 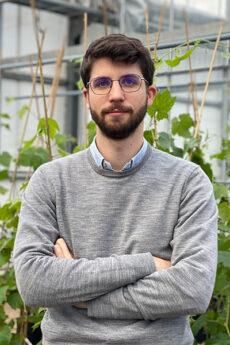 “The UV rays stim­u­late the plants to produce sali­cylic acid,” says Mr Rouesné. “This strengthens their natural defence against diseases like powdery mildew and downy mildew, so that less fungi­cide needs to be used.” Unlike the appli­ca­tion of classic fungi­cides, the effect here is not impacted by wind or rain. Another advan­tage: The field can be entered again imme­di­ately. UV stim­u­la­tion is based on a phys­ical process and is 100% compat­ible with all crop protec­tion programs, whether conven­tional or organic.

UV flashes trigger a defence mech­a­nism in plants, before a pathogen appears.

The invest­ment for the UV panels amounts to around €55,000 (£47,181). “Wine­growers who use our tech­nology come from different regions including Bordeaux, Cham­pagne and Occi­tania and work their fields both conven­tion­ally organ­i­cally,” says Mr Rouesné.

The UV flash tech­nology can be used in many ways: It is already used in straw­ber­ries, and tests are being carried out on fruit trees as well. Trials on conven­tional field crops will follow in a second phase. In addi­tion to France, UV Boosting is also working in Italy, Spain, Switzer­land and Cali­fornia.

Swedish vine­yards are growing in number and in quality, despite unfavourable climatic and commer­cial condi­tions. With warming climes, wine­growers intend to put the Scan­di­na­vian country on the map of Euro­pean vine­yards within a few years. ﻿