Swedish vine­yards are growing in number and in quality, despite unfavourable climatic and commer­cial condi­tions. With warming climes, wine­growers intend to put the Scan­di­na­vian country on the map of Euro­pean vine­yards within a few years.

In Vejbystrand, in south-western Sweden, Jeppe Appelin has taken the bold step of intro­ducing black grape vari­eties on his farm. “We started 15 years ago, after visiting Danish vine­yards. People have been telling us for years that you can’t make red wine in Sweden. But now we produce wine that ages well.”

Like most Swedish estates, Mr Appelin’s is modest in size: It is only one hectare, and is located on the southern coast of the Bjäre penin­sula. For Mr Appelin, as for many of his colleagues, the devel­op­ment of wine­growing in this Scan­di­na­vian country is pioneering work. On the land avail­able to him, the wine­maker is constantly exper­i­menting and borrowing from other wine­making tradi­tions, with a view to “push the limits of what is feasible in our climate”. 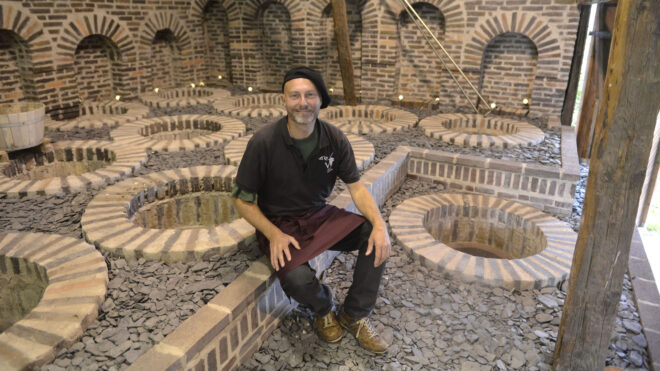 He found inspi­ra­tion in ancient Geor­gian methods and installed 20 1,000-litre clay “qvevris” in his winery. Without the addi­tion of yeast, some of the grapes (including skins and stems) are fermented there, gener­ally for several months. A long process, but one that gives the product body and round­ness. The rest are fermented in steel, concrete or oak vats, a process which sees Mr Appelin working with 25 different yeast strains.

A helping hand for the soil

In an attempt to develop a ‘terroir’, the farmer added diabase, granite, gneiss, sand­stone and porphyry, from a mine site near the farm, to the sandy clay soil. “These stones not only add a very inter­esting mineral complexity to the wine, they also raise the soil temper­a­ture and improve drainage.” The roots of the vines, planted 15 years ago, now reach the shallow ground­water and irri­ga­tion is unnec­es­sary.

When it comes to maturing the wine, Mr Appelin is exper­i­menting with the Solera method, common in Spain and Portugal. This tech­nique consists of stacking several tiers of barrels, with the oldest wine in the bottom row, and decanting some of the contents of a tier into the one below several times a year as part of the bottom tier is bottled. This makes the wines more complex, with the remaining older contents of a barrel “educating” the incoming younger wines. 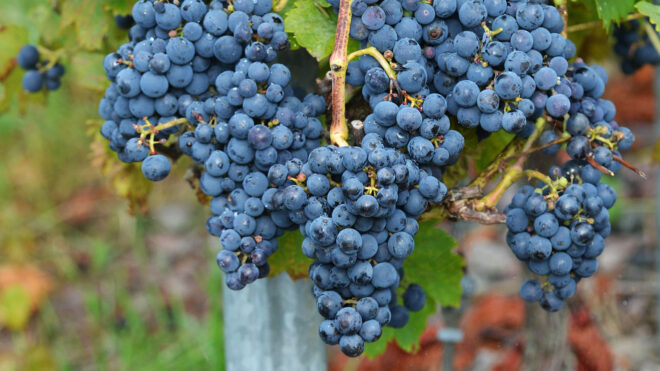 Although blue grapes are more labor-inten­sive, they cope well with the Scan­di­na­vian climate, as Jeppe Appelin has proven on Vejby Vingård.

The main chal­lenge remains marketing. In Sweden, the state-owned “System­bo­lateg” has a monopoly on the retail marketing of alco­holic prod­ucts; one of the aims being to regu­late the consump­tion of alcohol. As a result, Mr Appelin currently has only three sales chan­nels for his wine: State-run shops, restau­rants and consump­tion on the estate.

None of the three really fit the bill. “Our wine is too expen­sive for the state-run shops” (which tax the prod­ucts heavily). “Restau­rants are still reluc­tant to offer Swedish wines on their menus. And I don’t want to make beds in order to sell a bottle of wine. I want to make wine,” he argues passion­ately. At present, his only outlet is for groups who attend his tast­ings. In other words, he is impa­tiently awaiting the announced revi­sion of the law on alcohol, which could allow him to sell his bottles on the estate within a year or two. 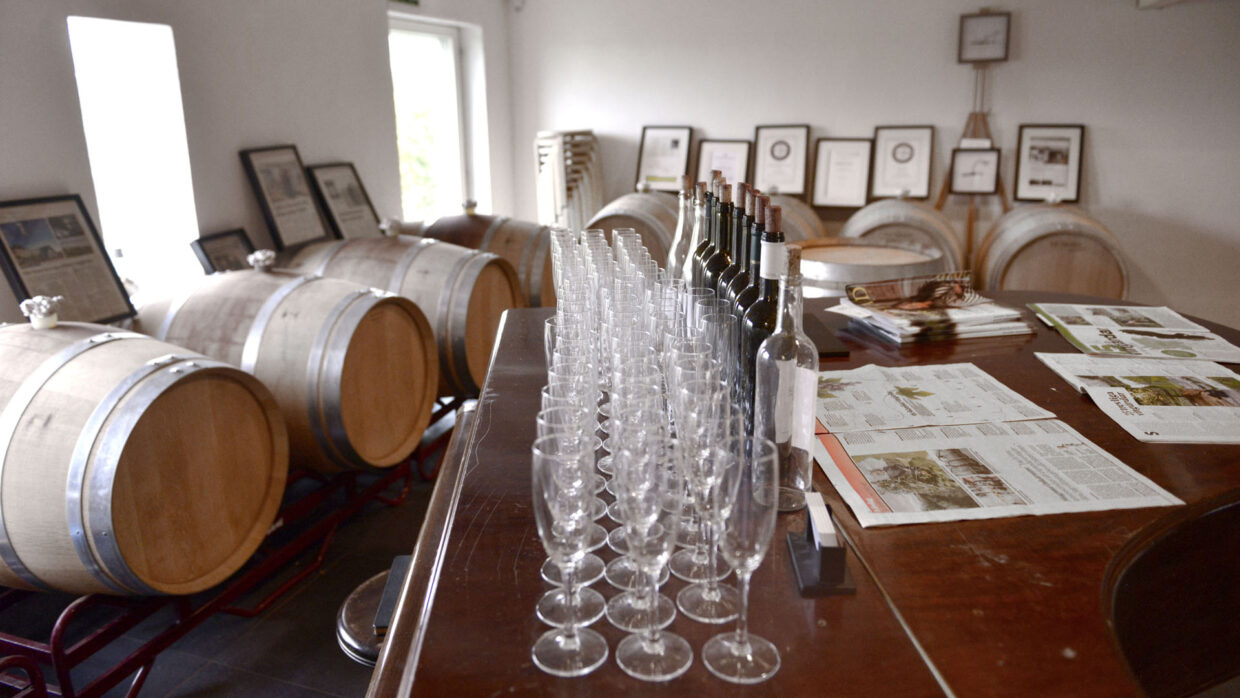 At the moment, wine tast­ings are Appelin’s only marketing option.

On the Northern Trail

In Väder­stad, near the northern edge of the Swedish vine­yards, Niclas Albinsson turned to wine­making 10 years ago. On his estate in Särtshöga, he farms two hectares and produces 10,000 bottles of sparkling white wine per year. He has planted 8,000 Solaris vines, a white PIWI grape variety (resis­tant to fungal diseases) devel­oped in Germany by the Wein­bauin­stitut in Freiburg, which produces excel­lent results in Scan­di­navia. 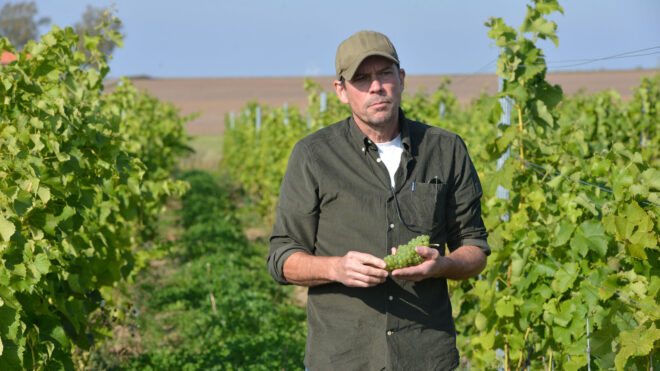 In Särtshöga Vingård, Niclas Albinsson only grows the green Solaris grape variety and has now intro­duced a Swedish quality label with other wine­makers based on the French cham­pagne method.

“I think that in Sweden we should focus on producing high-quality white wines from grapes that can with­stand our climate,” he says. The estate, nestled between a lake and a moun­tain, enjoys rather mild weather condi­tions, with an average temper­a­ture of over 10°C. “With Pierre-Yves Bourne­rias from the Institut Œnologique de Cham­pagne, we found that the temper­a­tures, sunshine and rain­fall were almost the same as in Cham­pagne.”

Mr Albinsson himself is working according to the tradi­tional method of cham­pagne produc­tion. Half the harvest is destined for a cuvée (blended wine) and 40% for aging in oak barrels. The wine is stirred after the first fermen­ta­tion: “It helps me to protect the wine from oxida­tion and bacteria, to manage the polyphe­nols, and to give it a full-bodied flavour.” The produc­tion period of a cuvée is three and a half years. “We want to reveal the complexity of the vine’s aromas, not to make a sweet wine, but rather a fresh one, and that takes time.”

Moving towards a quality label 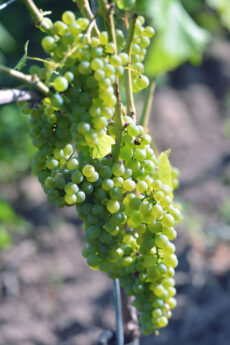 Solaris domi­nates Swedish viti­cul­ture. White sparkling wines as well as still wines are made from this grape variety.

With the aim of gaining a foothold in the inter­na­tional market, Mr Albinsson has collab­o­rated in estab­lishing an appel­la­tion-type stan­dard for Solaris sparkling wine producers; the Swedish Sparkling Wine Asso­ci­a­tion, with spec­i­fi­ca­tions largely inspired by the tradi­tional method. “A label like this is a guar­antee for consumers,” he says.

As for the finan­cial and time commit­ment, the wine­maker had to develop a restau­rant and bed and break­fast activity in order to acquire a licence to sell alcohol. “It’s a choice that takes up a lot of our time,” he concedes. Of course, this diver­si­fi­ca­tion has had a very posi­tive economic impact. “We have a turnover of about SEK 5 million (£420,000) from our small piece of land.” By way of compar­ison, he explains, “to achieve the same economic result in cereal produc­tion, you would need hundreds of hectares. “

Warming as a long-term benefit

However, he is also calling for a relax­ation of the regu­la­tions governing sales. “I don’t want to sell my wine in super­mar­kets. Instead, I want to open a point of sale on the estate and develop hospi­tality and wine tourism just like in France, Nappa Valley in the United States, and other wine coun­tries. This would mean a lot to the rural economy.” 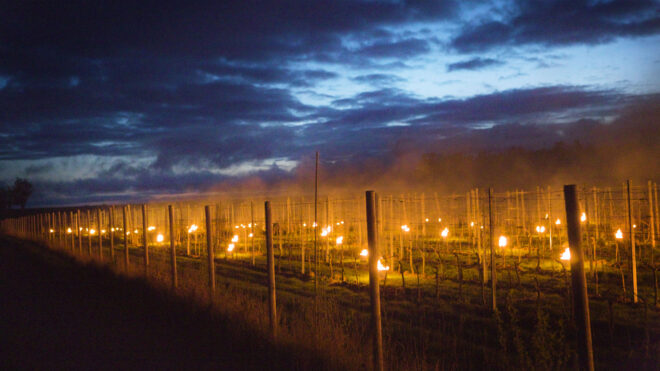 In spring, the Swedish wine­makers protect their grapes by lighting small fires in the vine­yard to raise the temper­a­ture during frost nights. Photo: Niclas Albinsson

While waiting for the legislator’s deci­sion, Swedish wine­makers continue to grow in number and their wine in quality. This is not due to climate change, but to careful grape selec­tion, breeding and cultivation, says Mr Albinsson. “It’s not like it’s 15 degrees warmer here. This is all linked to the fact that we now have grape vari­eties that are better adapted to our climate.”

The fact remains that the increase in average temper­a­tures could, in the long term, contribute to the shift of part of the Euro­pean wine-growing area towards more northerly regions, notably because of exces­sively high sugar levels in the South of the conti­nent. “Many investors are looking towards northern Europe, including southern Scan­di­navia,” suggests Mr Albinsson.

Still a small and select niche

The wine-growing area of this Scan­di­na­vian country is still some­thing of a well-kept secret, comprising 125ha and a handful of farms. Most estates are one to two hectares, and the largest about 20. The total land area has never­the­less been increasing rapidly in recent years. But only 50 estates have currently put their wine on the market.

The grapes reach matu­rity in about 100 days, with flow­ering in April and harvesting in late September or early October. Solaris is the most commonly grown grape variety. Yields are about 1kg/vine, which gives about 3,000kg/ha of grapes.

Working grapevines on steep slopes is as tradi­tional as it is demanding. Three students are looking to simplify the process, and to save wine­makers time and effort with the help of "Bacchus" soft­ware.﻿