Only a small frac­tion of farmers, gardeners and wine­makers use the rain­water falling on their farm and roof surfaces to irri­gate their crops or as drinking water. The mindset plays a greater role here than economic calcu­la­tions.

“We’re sensi­tive when it comes to water”, says wine­grower Andreas Hemer from Worms-Aben­heim in southern Germany. And for good reason: the annual rain­fall in this region is a measly 550l/m2. He and his brother Stefan there­fore use effi­cient drip irri­ga­tion in times of drought on their organic vine­yard. In 2012, the family busi­ness, with 36ha of vines and its own bottling station, built a new produc­tion hall outside the village centre. The devel­oped area comprises about 1ha, of which around 2,000m2 is covered by a roof, which is fitted with photo­voltaics on its sun-facing side.

“We want to collect the rain­water falling onto the roof in two large 50,000l cisterns”, explains Andreas Hemer. This water will be used mainly for mixing organic pesti­cides and to irri­gate the hedges planted around the winery grounds. Rain­water that flows over the paved surfaces later seeps into a trench dug around the grounds. 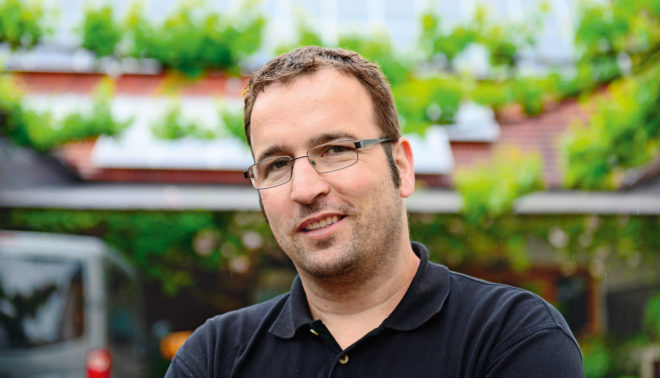 In future, organic wine­grower Andreas Hemer will collect and repur­pose the rain­water from his roofs. 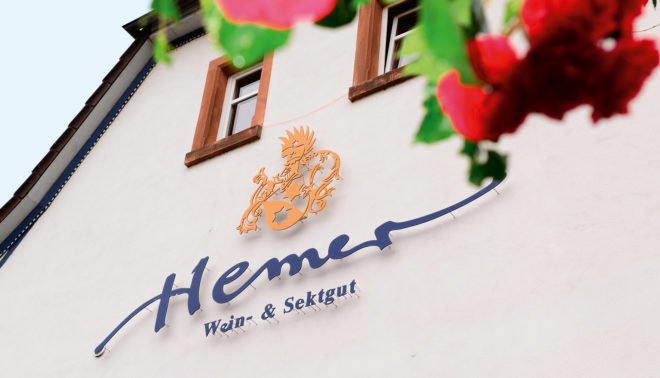 The fourth-gener­a­tion winery in Worms-Aben­heim, Germany, estab­lished in 1902, is run today by brothers Andreas and Stefan Hemer. 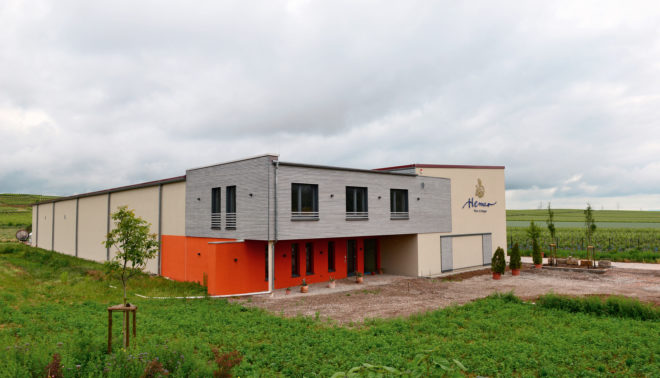 The new building on the green field: machine hall, bottling station and wine press all under one roof.

Of course, another option would be to drill a well on the prop­erty, but this would mean drilling 80 to 100m deep. This isn’t cheap, according to Andreas Hemer, not to mention the strain it puts on the ground­water balance. However, the planned rain­water processing is not an invest­ment that will pay off quickly.

“We’re thinking long-term. We’d like to supply our water ourselves as far as possible, similar to how we source our energy from wood­chip heating and our elec­tricity from photo­voltaics”, he says. The Hemer brothers converted their farm to organic oper­a­tions in 2003 and they are currently a member of the Ecovin asso­ci­a­tion of organic wine­makers. Further­more, the less waste water from the farm that ends up in the public sewage system, the lower the fees for the energy-inten­sive treat­ment of this water.

We’d like to supply our water ourselves as far as possible.

Speaking of energy, more and more experts are pointing out the strong link between water and energy, using the term “water-energy nexus” –  when energy consump­tion increases, so does the need for water. Every dairy farmer knows the vast quan­ti­ties of water required for cattle housed in the shed all year round. With a daily require­ment of more than 100l per high-perfor­mance animal, a 200-cow oper­a­tion accu­mu­lates a remark­able annual quan­tity of 7,300m3 of water. Cattle also usually consume drinking-quality water. What could be more logical than repur­posing the water collected on the stall roofs for the thirsty animals? 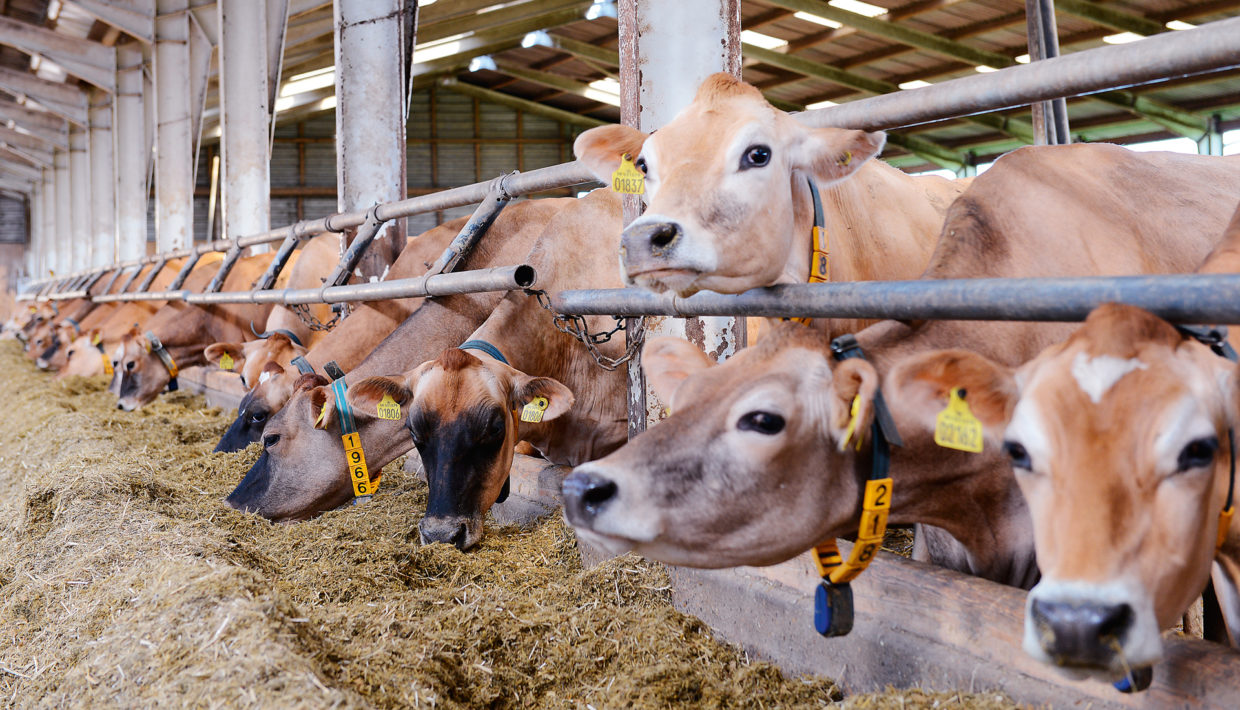 Large cattle herds are often housed in cowsheds all year round: their drinking troughs thus use high amounts of water.

But there are some concerns to consider. “Cows require the best-quality water”, according to Dr. Peter Pascher, Director of Agri­cul­tural Struc­ture and Regional Policy at the German Farmers’ Asso­ci­a­tion. Mr Pascher believes that there are many argu­ments against the use of rain­water, such as for hygiene reasons (i.e. bacteria, cont­a­m­i­nants and foreign substances). “Today, food produc­tion in Europe has very high quality require­ments which could be jeop­ar­dised by the use of rain­water”, Mr Pascher adds. “And dairy producers are aware of this”. He fears that inad­e­quate drinking water could also have far-reaching conse­quences for live­stock health. 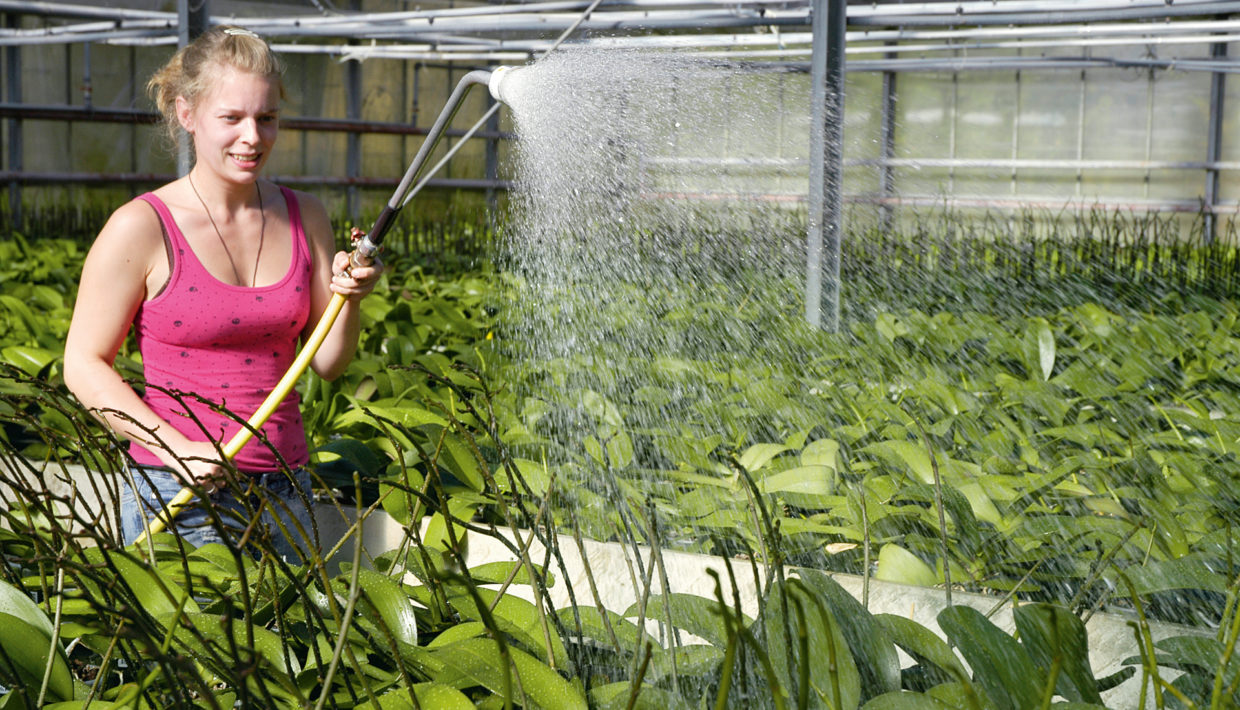 Whether it’s deco­ra­tive plants or vegeta­bles in glasshouses: healthy plants need a suffi­cient and regular amount of water.

While only a small propor­tion of live­stock farmers are working on long-term strate­gies for the local treat­ment of valu­able water resources, even with compa­rably low water costs and despite increas­ingly evident climate change, greater strides have clearly been made in horti­cul­ture. “Rain­water processing is now being imple­mented by many oper­a­tions”, notes Dr. Andreas Wrede gladly. Dr. Wrede, Lead Exam­iner at the Horti­cul­tural Centre of the Schleswig-Holstein Chamber of Agri­cul­ture, does not however deny that recy­cling without phytosan­i­tary treat­ment is not recom­mended – even though it is expen­sive. “Every­body is aware that water prices will rise in the future and that it will also become harder to build wells”, observes the horti­cul­ture expert.

Mr Wrede also proposes another argu­ment: “The use of rain­water has a further advan­tage. In contrast to hard tap water, rain­water comes for free and is also of a softer water quality, which has a posi­tive effect on plant growth”. Mr Wrede hopes that in future, even more horti­cul­tur­ists, wine­growers and farmers will adopt new ways to conserve ground­water resources.

Espe­cially as, in the face of a growing demand for food, there is no longer any doubt that agri­cul­ture, whether in Europe or else­where in the world, will need to handle water more effi­ciently in order not to upset the deli­cate water supply balance.

Green­house plants are quite thirsty: although it differs consid­er­ably depending on the plant, around 42m3 of water on average is required daily for 1,000m2 of cultivation. To scale reser­voirs for tree nurs­eries and other horti­cul­tural oper­a­tions appro­pri­ately, the following guide­line figures apply: During the annual vege­ta­tion period, tree nurs­eries produce around 2kg of fresh wood mass per container area of 1m2. This requires about 550l of water. In order to meet this need with winter rain­fall, an area of 1ha requires a reser­voir with a volume of 3,500m3.

If rain­water is also collected during the summer, the reser­voir volume could be reduced by up to a third with simul­ta­neous filtering, according to the calcu­la­tions of Andreas Wrede from the Horti­cul­tural Centre in Eller­shoop, northern Germany. It’s not just collecting water that’s impor­tant for the water cycle however, but also the type of irri­ga­tion. While a rota­tion sprin­kler uses around 100m3/ha and per day, drip irri­ga­tion requires only 20m3.