How we created our very own Silk Road

In the heart of Calabria, in the Italian province of Catan­zaro, there are still people who grow mulberry trees and breed silk­worms to produce one of the world’s finest yarns. The core values at play here? Tradi­tion, an arti­sanal supply chain, an organic process, diver­si­fi­ca­tion, ethical action and sustain­able land devel­op­ment.

“Our roots go back to a distant past when our grand­par­ents lived off the land. This is a passion that has been passed down from gener­a­tion to gener­a­tion, a special world that today allows us to be in contact with nature and enjoy life authen­ti­cally.” This is the thinking of Domenico Vivino, Miriam Pugliese and Giovanna Bagnato, of the Nido di Seta agri­cul­tural co-oper­a­tive in San Floro, a small Calabrian organ­i­sa­tion set up in 2014 to breathe new life into disused munic­ipal land, home to more than 3,000 mulberry trees.

Armed with courage and willpower, these young men, returned after their studies to their home region and recre­ated the ancient art of mulberry farming, prac­ticed in southern Italy since the 12th century. “In the past, mulberry growing was a central activity in our area,” they explain. “We decided to recover a part of our history, bringing a touch of modern flair, and restoring a small Calabrian Silk Road. Starting with the land and its resources, via the breeding of worms, we arrive at the finished product, and all through an entirely arti­sanal supply chain. We produce 100% Italian silk, hand-woven on a loom and dyed with natural prod­ucts.” 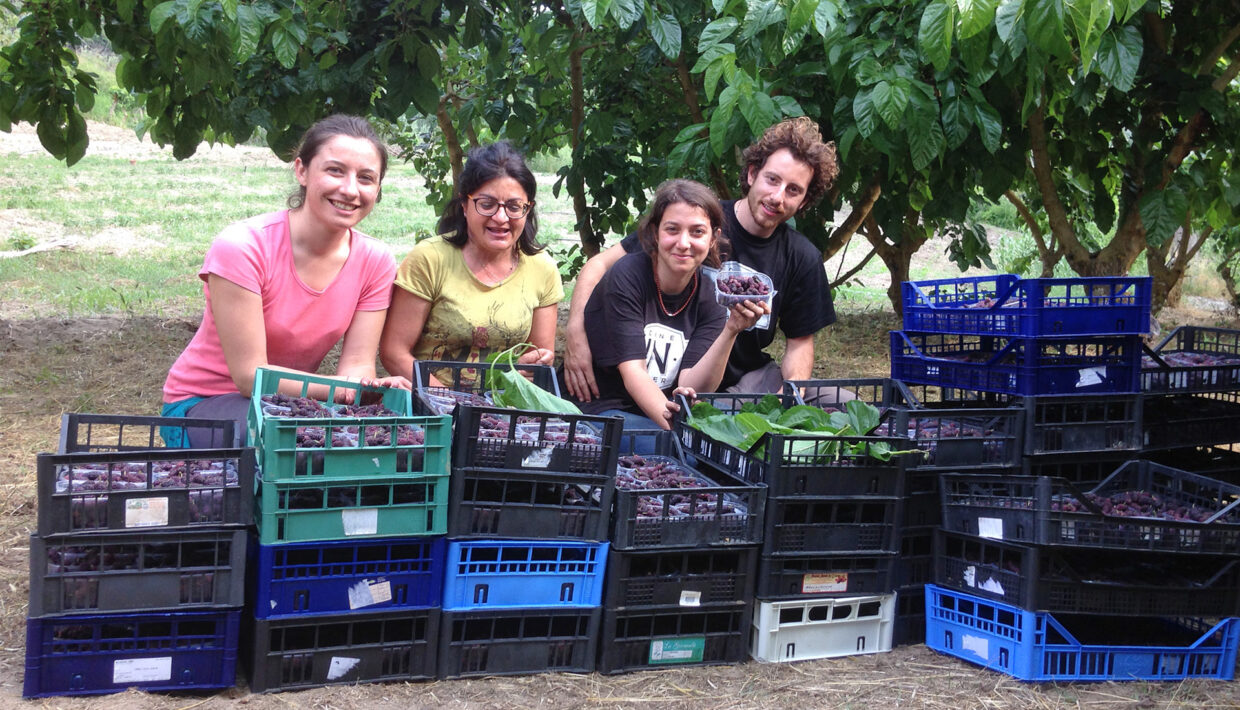 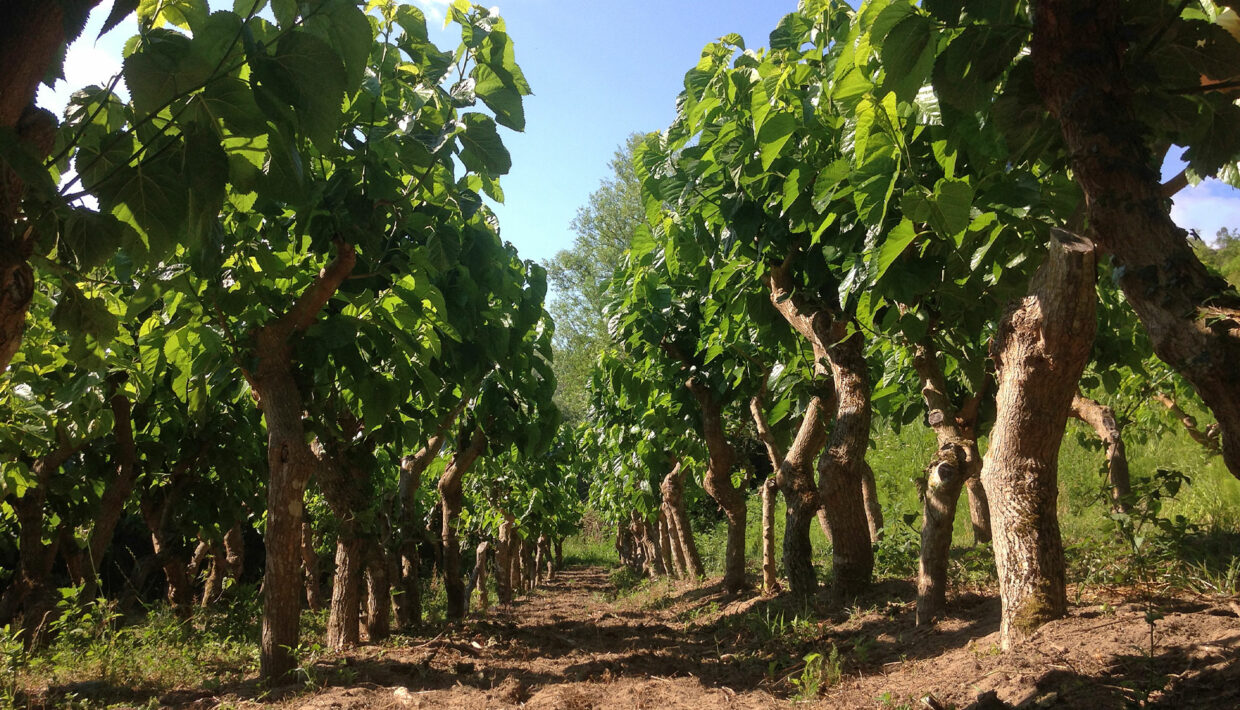 Across seven hectares, Nido di Seta grows several mulberry species, including Morus Alba and Morus Nigra. The domi­nant variety is the Korean Kokuso, which can produce very large leaves, but Cattaneo and Florio white mulber­ries can also be found here. Their fronds are used to feed the silk­worms reared on the farm in well-venti­lated and sani­tised rooms, which are moni­tored for both humidity and temper­a­ture.

Mulberry cultivation starts in May and continues until late summer/early autumn, closely related to the mild climate and the pres­ence of leaves. Pruning of the mulberry trees – the most tiring activity, according to Mr Vivino – takes place in two stages. The first is for foliage produc­tion, around the end of May, while the second – for organic mulberry produc­tion – is due at the end of January. The plants, which are truly resilient and impor­tant for protecting the soil from hydro­ge­o­log­ical insta­bility, do not require specific irri­ga­tion and are fertilised with pruning biochips, a fertiliser obtained from the composted worm drop­pings.

“One of the most wide­spread diseases is Mycosphaerella mori­folia, a fungal disease that, fortu­nately, is very much under control here,” explains Mr Vivino. “We harvest the leaves by hand: The younger the worm, the more it needs tender petals, located in the outer­most part of the branches.” 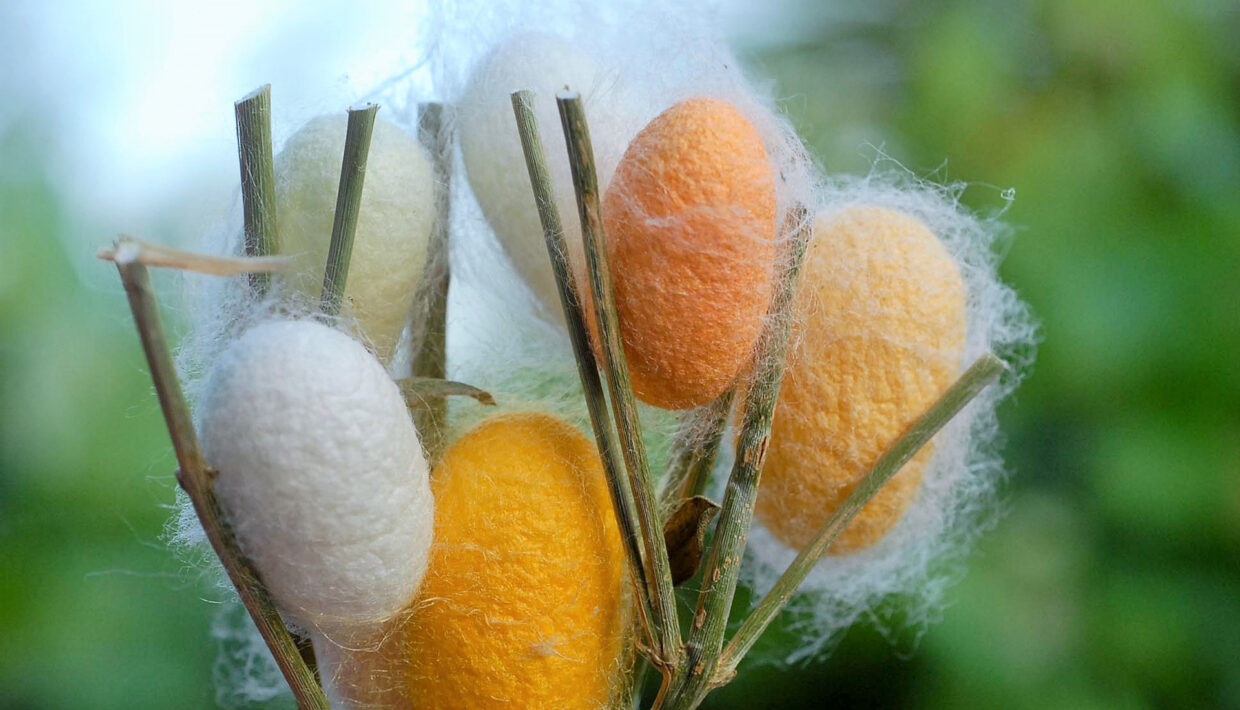 The moment of the worms' "ascent to the wood", with the forma­tion of silk cocoons on broom branches. 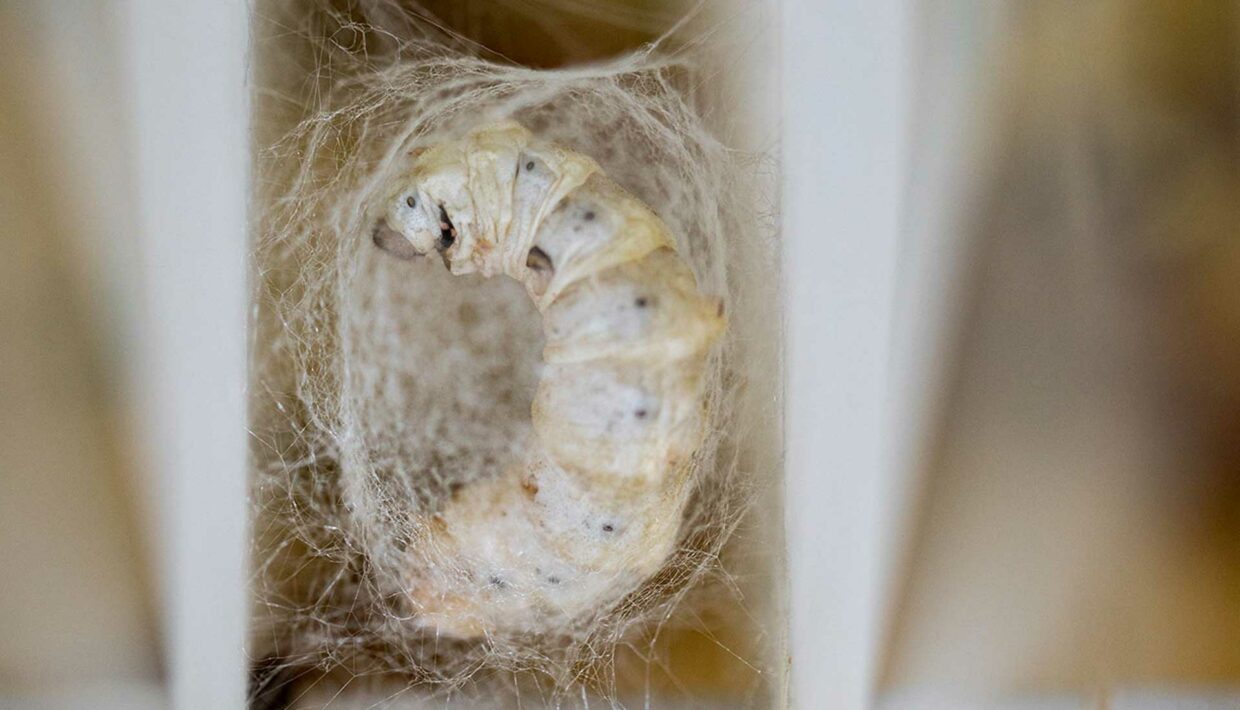 The Bombyx mori butterfly, which is extinct in nature, only survives in breeding farms. 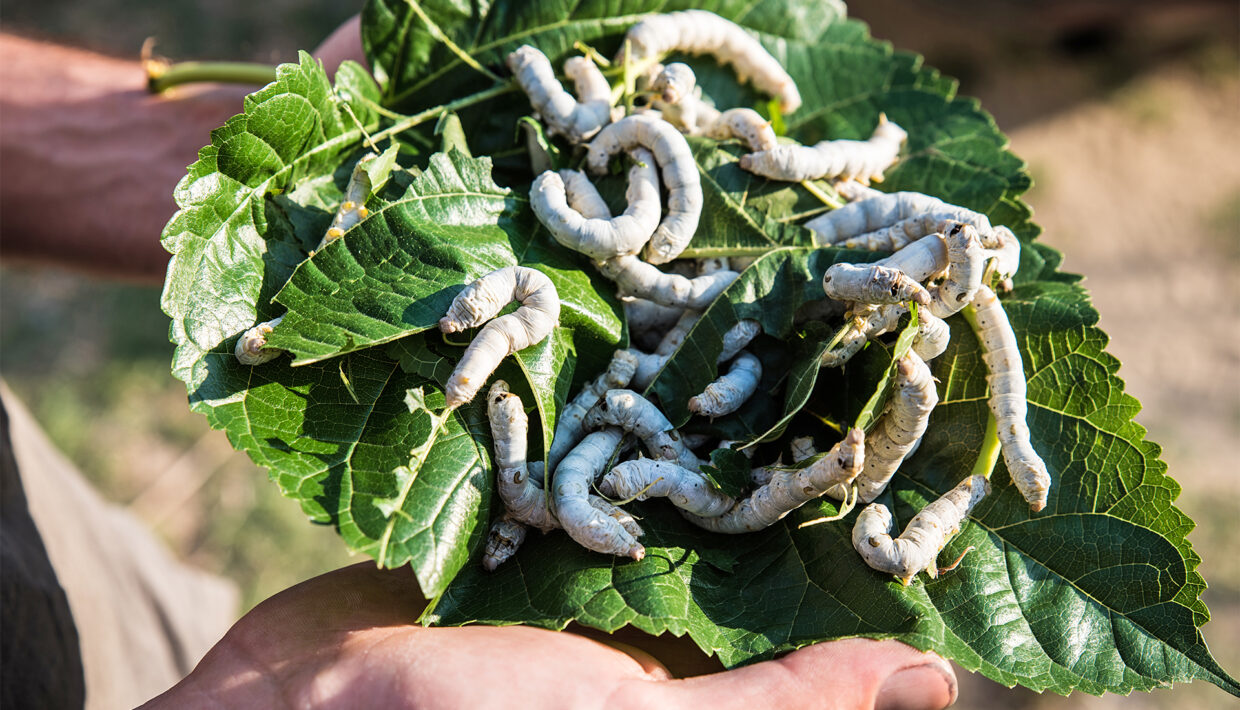 The Fifth Age: The stage at which silk­worms reach their maximum size. 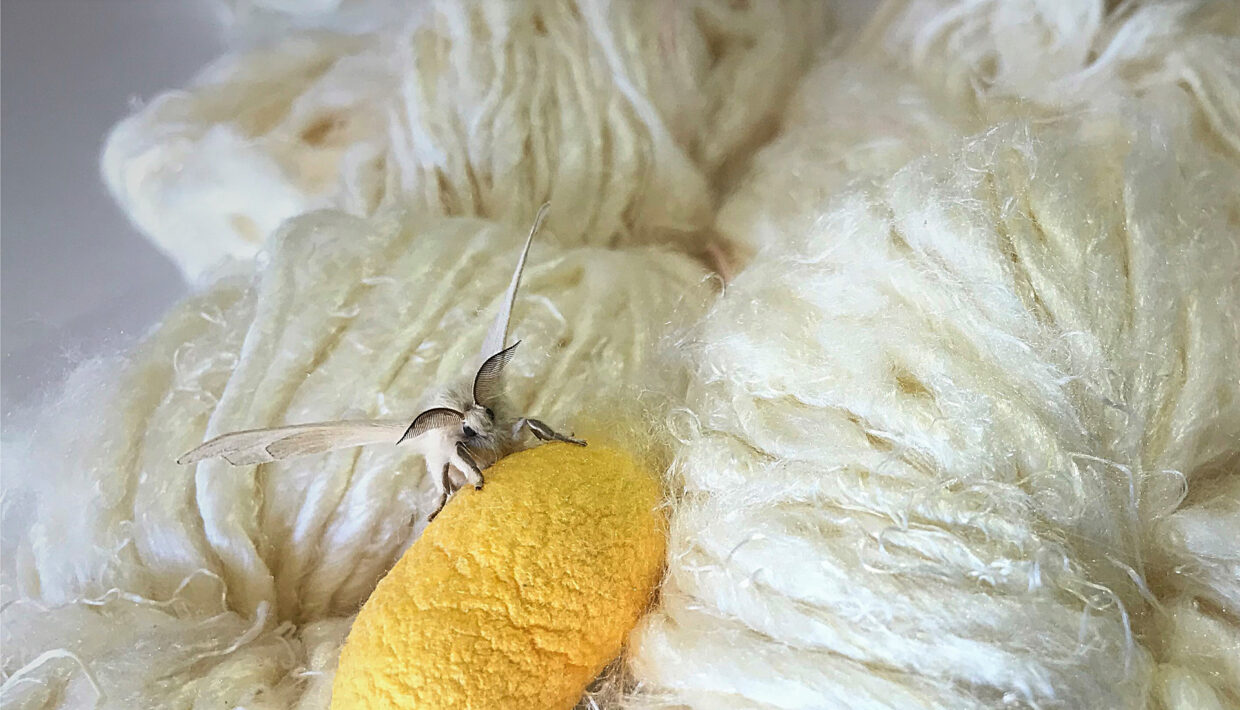 35 kg of natural silk per year

The breeders’ unit of measure­ment is the burlap, which contains 20,000 silk­worm eggs, also known as seed. Bombyx mori is the scien­tific name of this lepi­dopteran, which is now extinct in the wild and only lives on farms, feeding solely on mulberry leaves. Each adult moth lays, on average, 500 eggs, and at the end of the larval cycle, which lasts about 30 days and includes four moults, there is the “ascent to the wood”, the moment when the silk­worm weaves – often around dry twigs – its silk cocoon. This neat ball of contin­uous thread, thanks to genetic cross­breeding and hybrid plants, can be up to 2km long. The cocoon marks the start of the post-produc­tion process, and, through reeling and twisting, leads to natural silk fila­ments.

“In one year, we run through four larval cycles,” explains Mr Vivino. “We use five burlaps (100,000 silk­worm eggs); in summer we breed very few worms due to the high temper­a­tures. All in all, we produce about 100kg of fresh cocoon per year and, as a rule, we obtain 6-7kg of raw silk from each frame.

“We do not sell the cocoons directly and distribute skeins of silk to a small extent throughout Italy to hand-weaving work­shops. Through e-commerce and in our shop, we sell a variety of finished prod­ucts – from scarves to foulards and jewellery to acces­sories – all hand-woven and dyed with natural pigments. We use ecoprint and the batik dying tech­nique and collab­o­rate with several artists and craftsmen in Italy as well as various part­ners in our supply chain. We are also starting to get requests from some retailers in big cities, like Rome and Florence.”

Before being a busi­ness, mulberry growing is a passion.

A complete and virtuous circuit

From agri­cul­ture to hand­i­crafts, the group have created authentic, sustain­able and expe­ri­en­tial tourism, for people in search of the spirit of the region and the secrets of this 1,000-year-old tech­nique. Many tourists come to San Floro from all over the world, from America to Eastern Europe. Here they can taste all of Nido di Seta’s certi­fied organic prod­ucts, like sorosi: Mulberry black­ber­ries, which are also used to make jams. There are also herbal teas made from mulberry leaves, and various seasonal vegeta­bles which are offered in the farm’s farm­house menus.

Visi­tors can also adopt a mulberry tree. “We do not believe in agri­cul­ture for its own sake,” states Mr Vivino. “Partic­u­larly in the field of mulberry cultivation, multi­func­tion­ality and diver­si­fi­ca­tion are key concepts. Thanks to our supply chain – made up of Calabrian farmers and craftswomen – day by day we are building a virtuous circle that orches­trates crafts­man­ship, cultural, artistic and culi­nary moments and makes our home a magnet for national and inter­na­tional tourism.”

However, it hasn’t been easy. The lack of infor­ma­tion in the area to help with the resump­tion of this ancient process was one of the first diffi­cul­ties the farmers faced. “To regain this knowl­edge, we have been disci­ples of many elders, the last heirs of our region’s centuries-old silk-making tradi­tion,” he adds. “To imple­ment their teach­ings, we have trav­elled exten­sively beyond Europe’s borders. This turned an initial weak­ness into an advan­tage and, later, into a strength.” 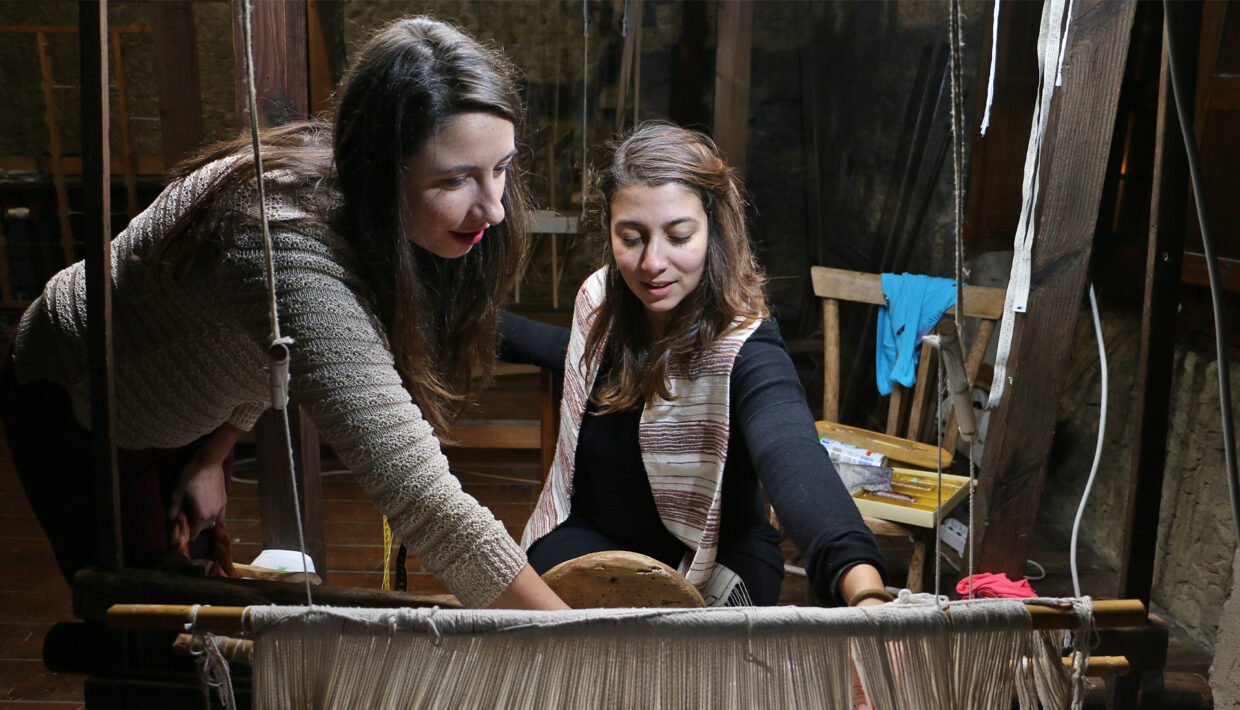 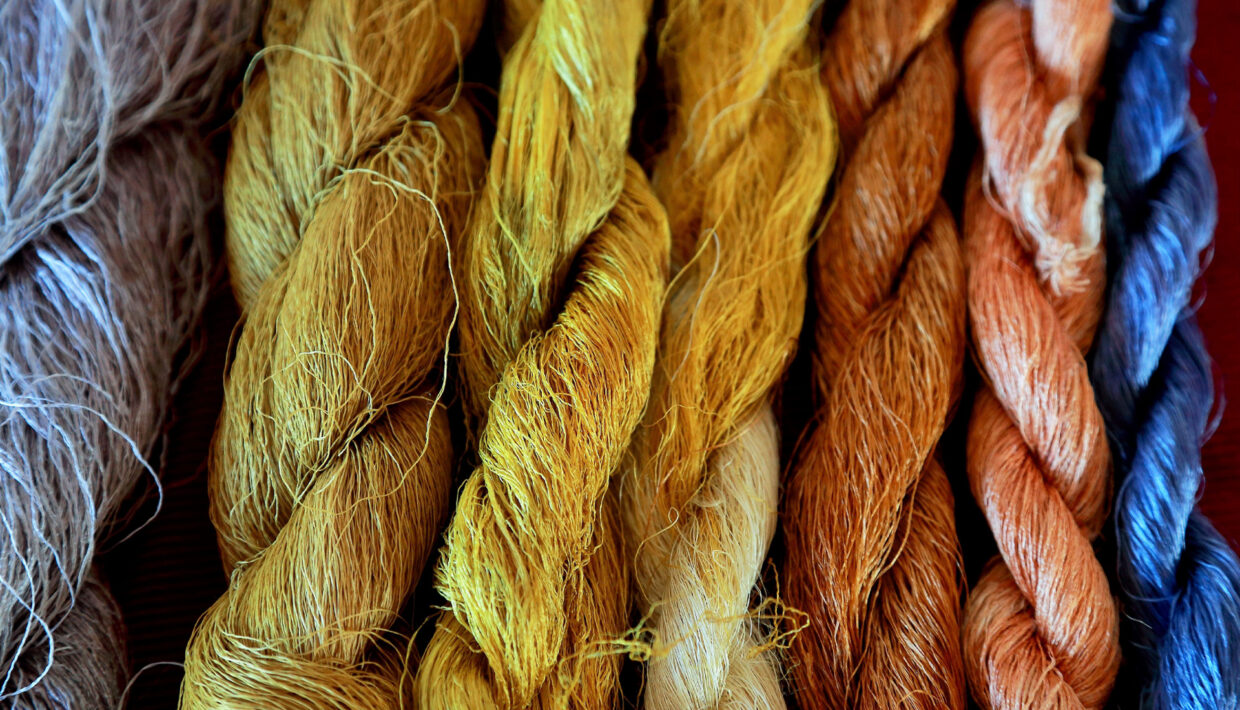 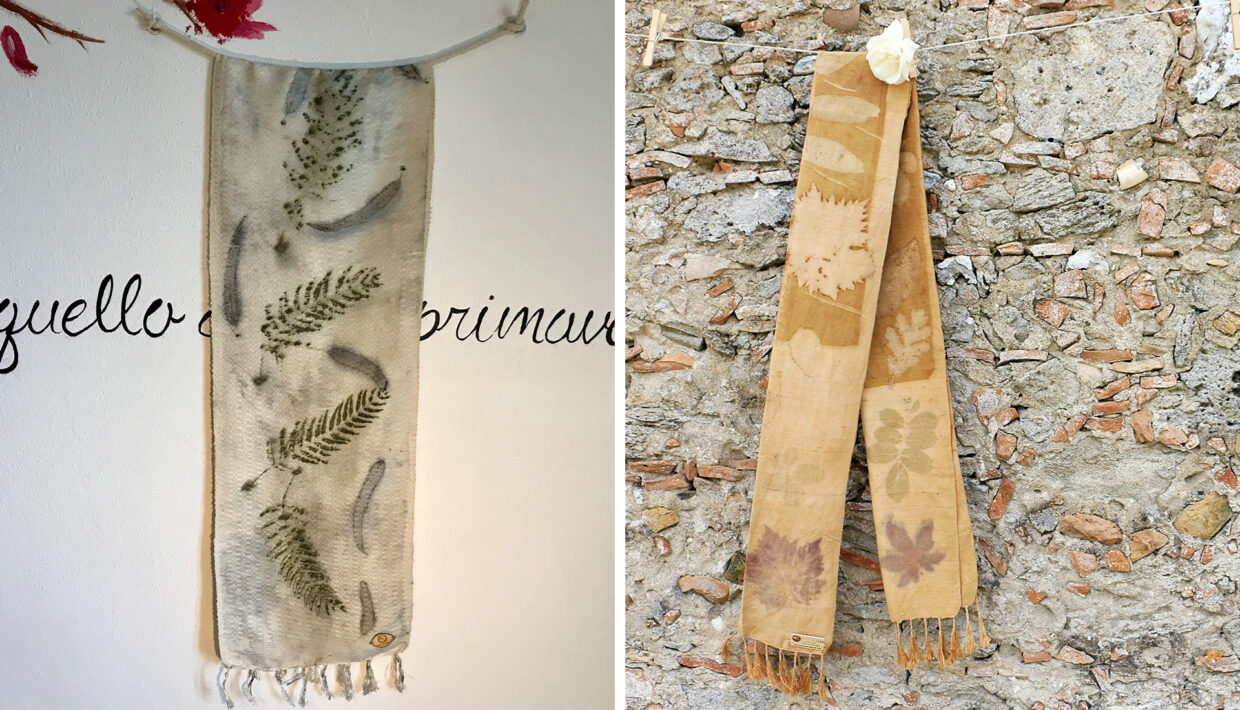 Silk scarf hand-woven on a loom and printed using the natural tech­nique of ecoprinting.

The co-oper­a­tive first twinned with the Khon Kaen Seri­cul­ture Insti­tute in Thai­land and later under­went specific training at the Central Silk Board in Banga­lore, India. It also discov­ered less conven­tional silk processing methods and new natural dyes in Mexico. In addi­tion, Euro­pean part­ner­ships have been forged with the Soierie vivante asso­ci­a­tion in Lyon, France, along­side various collab­o­ra­tions, like the Swiss Silk consor­tium in Hinterkap­pelen, Switzer­land, Arsac Mirto in Crosia, the Univer­sity of Texas, the Toronto School of Fashion, Aalto Univer­sity in Helsinki, the Univer­sity of Calabria and the Poly­technic Univer­sity of Bari.

“We are still connected with some of these organ­i­sa­tions because we offer training work­shops on tradi­tional yarn processing tech­niques through the Nido di Seta Academy,” Mr Vivino reveals. “One of our most impor­tant part­ner­ships is with the organ­i­sa­tion that supplies us directly with seed: The Crea-Api in Padua, led by Dr Silvia Cappel­lozza, which engages in research and exper­i­men­ta­tion in silk­worm breeding and seed produc­tion.

“Our vision of the future is a scenario in which social, economic and cultural devel­op­ment is based on a recon­nec­tion with the land, its fruits and values; an under­standing of life and work in which more space is given to direct contact with nature and the appre­ci­a­tion and use of local resources,” he adds. “This is why we plan to further increase mulberry cultivation and annual silk­worm breeding. Our dream is to create a real consor­tium of Calabrian silk, and we don’t have the habit of keeping our dreams under the covers.” 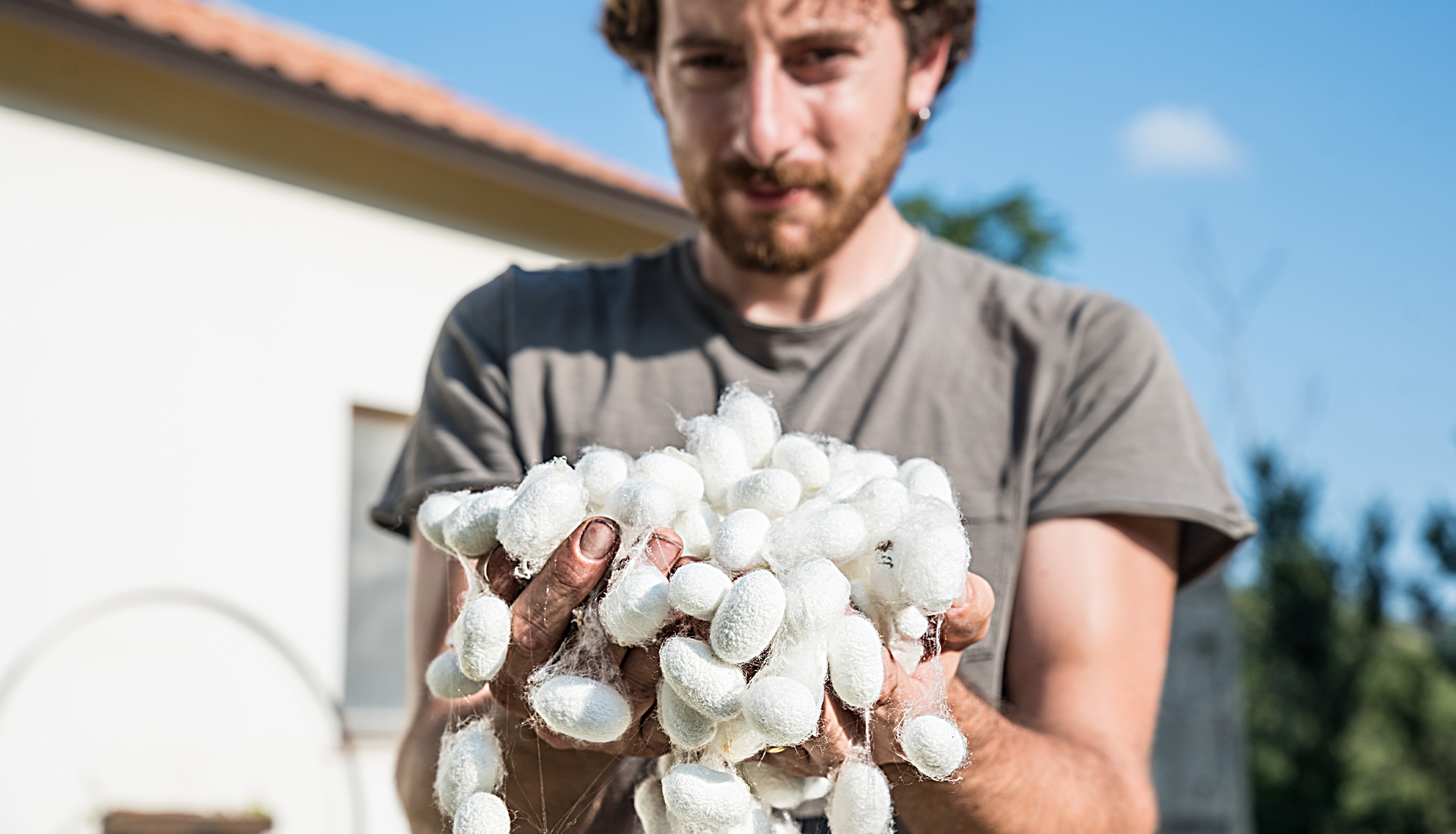 The Belmonte family has been using John Deere machinery on their farm for more than 40 years. Almost all of their trac­tors and combines have been of the green and yellow variety for a long time now. With their passion for agri­cul­ture, dedi­ca­tion, and commit­ment, they have become a well-estab­lished family busi­ness which primarily produces maize for animal feed.﻿

Slovenia is a great example of why small farms should have their place within modern agri­cul­ture, next to bigger, more inten­sive oper­a­tions. They can meet the chal­lenge of rein­forcing dialogue between farmers and non-farmers and, in so doing, create new revenue models for farming.﻿