The Italian rice farmers on the quest for balance

In Italy, Europe’s leading rice producer and exporter, farmers are searching for more stable prices and better crop rota­tion plan­ning. On top of the chal­lenges from inter­na­tional compe­ti­tion, they face restric­tions on pesti­cide use and an almost total lack of industry contracts.

The air is starting to warm up and a light spring breeze accom­pa­nies us as we cross the fields. Luigi Bianchi has an eye on his tractor, which has been at work since early morning. “Today we’re planting Caravaggio, a rice that’s very similar to the histor­ical Carnaroli rice, which has the advan­tage of being more prof­itable,” he explains. Along with his wife, Mr Bianchi produces 600t of unpol­ished rice per year on almost 100ha. His farm lies in Albuz­zano, which is part of Europe’s leading rice-producing province Pavia and located in the heart of the Po Valley.

In Italy, old rice vari­eties are improved but still marketed under their tradi­tional name, providing farmers with vari­eties which offer higher yields and lower produc­tion costs. Today, the strength of Italian rice produc­tion lies in its glob­ally unique genetic diver­sity. With 228,000ha, 4,000 farms and 1.40m tonnes of rice per year, Italy counts for half of the EU’s produc­tion and is Europe’s leading producer and exporter of rice. It’s an impor­tant industry, but one increas­ingly facing compe­ti­tion. “We are up against producers from Asian coun­tries,” explains Mr Bianchi. Among other advan­tages, they do not have to comply with the same increasing restric­tions on pesti­cides faced by the transalpine producers.

Less than 10km away, on his land in Sant Alessio con Vialone, Stefano Lamberti is busy sowing the Keope variety, also sold under the famous Carnaroli name and often described as ‘the king of rice’. The farm spans just over 200ha, three-quar­ters of which are dedi­cated to growing rice. The complete yield of 1,100t/year is sold to the food industry. “Our sector is still based on the free market prin­ciple of supply and demand,” he says. “In addi­tion to the small number of struc­tured industry contracts, there is a lack of plan­ning in the sowing process, which is reflected in market prices. They are highly volatile over the years.” 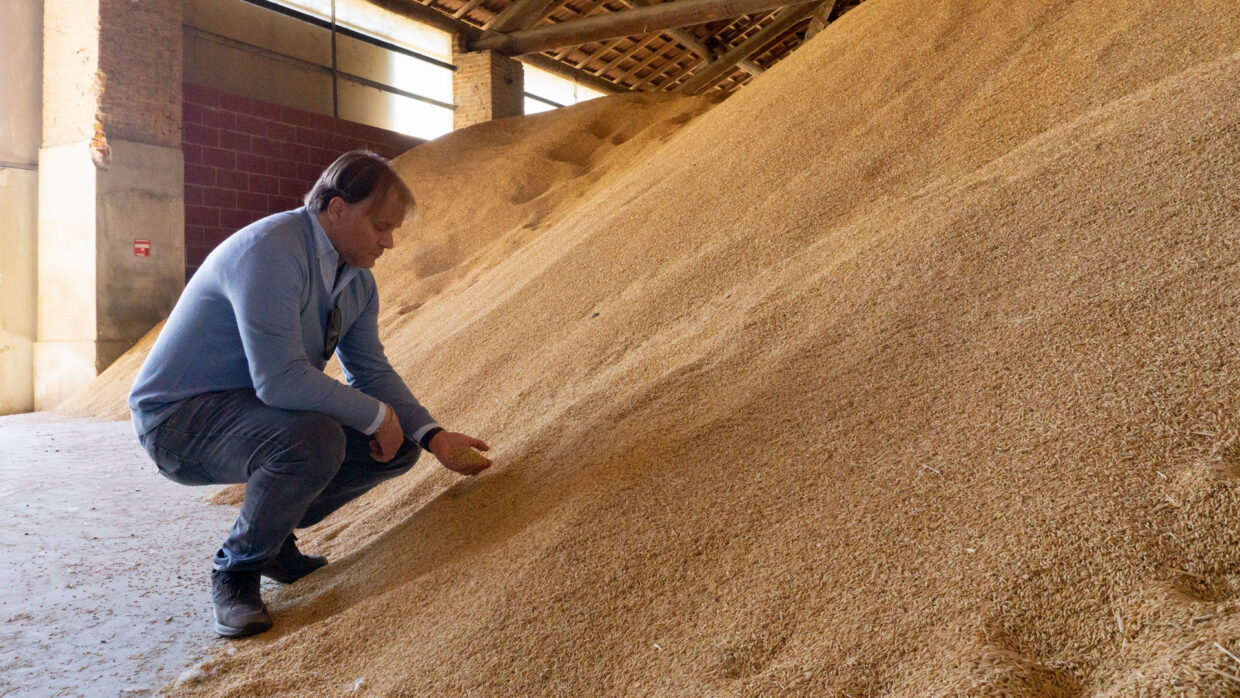 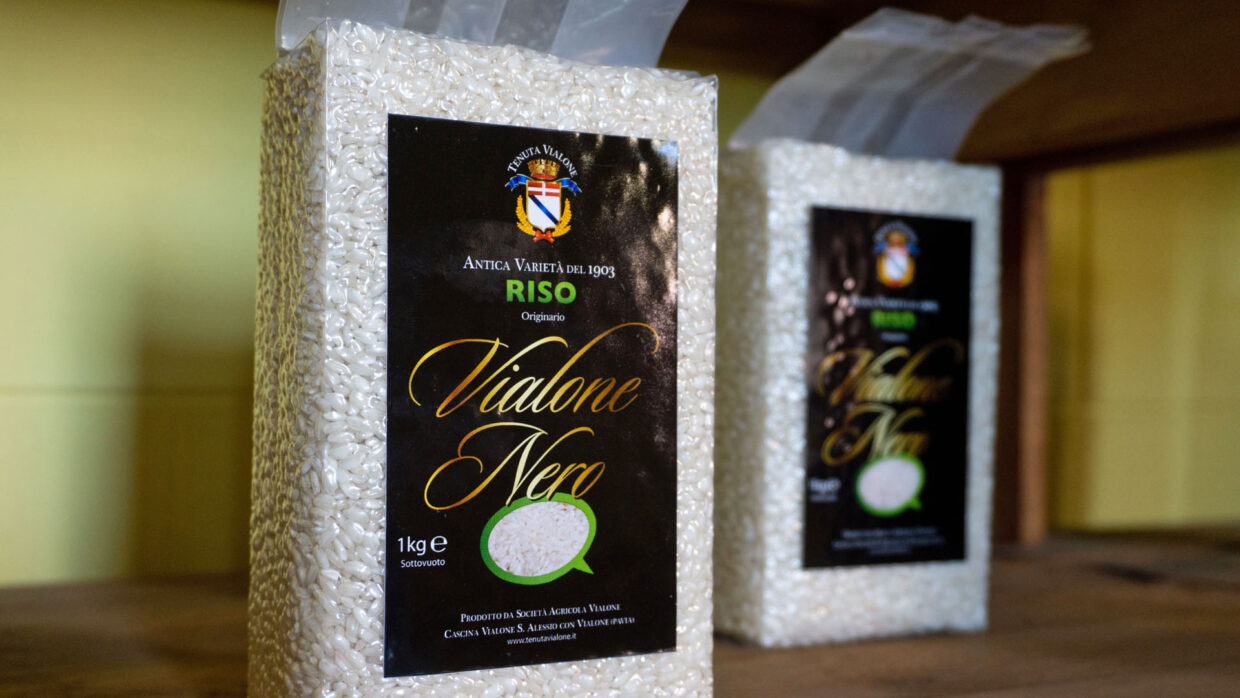 The Vialone Nero rice variety was born in 1903 in Cascina Vialone through spon­ta­neous muta­tion. In 2015, thanks to a variety recon­struc­tion project, it was regis­tered as a "conser­va­tion variety" by the Italian Ministry of Agri­cul­ture, Food and Forestry.

In this envi­ron­ment, diver­si­fi­ca­tion is prac­ti­cally indis­pens­able for Italian rice farmers to reduce risk and better redeem their invest­ments. Back on the farm, Mr Lamberti picks up a bag of rice and presents it with pride. It happened to be on his farm in 1903 that the Vialone Nero variety, emerging from a spon­ta­neous muta­tion, started to breed, giving rise to a great number of vari­eties that domi­nate the land­scape today. “Thanks to collab­o­ra­tion with the Univer­sity of Pavia, we resur­rected the Vialone Nero in 2015, after it had been aban­doned in recent years. We are now the only ones to preserve the seed and produce 2t/year. We couldn’t manage without genetic improve­ment. But it’s also impor­tant not to abandon the classic vari­eties; it’s just that their quality must be reflected in the sales prices. “ 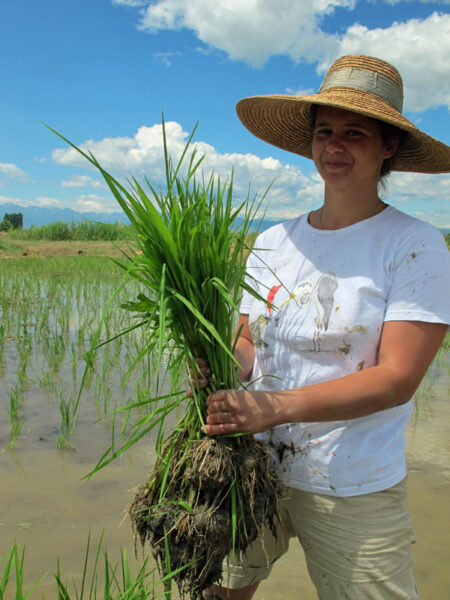 It’s an opinion shared by Igiea Adami, who, on his 150ha dedi­cated to rice cultivation in the province of Verceil, continues to produce Carnaroli, comprising 15% of the 1,100t of rice he produces per year. One third of this produc­tion is still trans­planted into water by hand and grown without chem­ical support. “Because of fluc­tu­ating prices and high produc­tion costs, classic vari­eties are increas­ingly disap­pearing from farms,” says Mrs Adami. “But we are still convinced of their poten­tial.”

He sells all of the old vari­eties harvested to the regional market. The rest is mostly exported. “For the more produc­tive vari­eties, we have estab­lished cultivation contracts with proces­sors over the past five to six years, although I’m concerned that this may be a double-edged sword in terms of bargaining power.

“Another impor­tant issue is the limi­ta­tion imposed on pesti­cide use, as some of them are autho­rised abroad.” There are no mutual regu­la­tions in rice farming today; neither within the EU nor between Europe and third country producers. The result: Lower yields, and an increase in produc­tion costs. “As a solu­tion, those who can – like us – are imple­menting preci­sion farming tech­niques,” says Mrs Adami. “But this is rarely suffi­cient to achieve equal compet­i­tive­ness.”

Imports of Indica milled rice from Cambodia and Burma to Europe have been curbed by a protec­tive tariff adopted by the Euro­pean Commis­sion in 2019, explains Stefano Greppi, pres­i­dent of the Coldiretti (Italy’s largest agri­cul­tural union) for the Pavia region. But the tariff is now coming to an end and there has been a sharp increase in imports of Burmese Japonica milled rice, which is not subject to this duty. 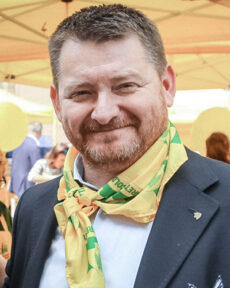 Stefano Greppi, pres­i­dent of the Coldiretti union for the Pavia region and rice producer in Rosasco.

What’s more, the past two years have seen an increase in imports from non-EU coun­tries – above all Thai­land – of rice in pack­ages smaller than 5-20kg. “This phenom­enon has put the Euro­pean rice industry out of busi­ness,” states Mr Greppi. “It has allowed competi­tors to gain shelf space in our super­mar­kets, and it cannot be solved by contin­uing to rely solely on the protec­tion of import duties.”

Another aspect to the problem is the lack of ‘serious’ industry contracts, which currently are unlikely to exceed 1% of national produc­tion. “The industry prefers to main­tain a frag­mented supply because it would benefit less from binding price agree­ments, but industry contracts – struc­tured to involve producers, proces­sors and retailers – are crucial to ensuring that farmers receive a market price that at least covers their costs,” says Mr Greppi. Finally, prod­ucts should be traced and labelled with their complete origin, from seed to pack­aging. “This wouldn’t only help in justi­fying the price but would protect made in Italy prod­ucts.”

The ques­tion of water

Let’s return to the Bianchi farm. “We absolutely need a more struc­tured industry,” Mr Bianchi agrees, nodding his head. “We are plan­ning to create a Protected Geograph­ical Indi­cator (PGI) for Po Valley rice. Tradi­tional vari­eties can be a real benefit to the sector if they are protected by a label, and it is impor­tant to value them, so that quality and diver­sity are not lost.”
It’s nearing midday as we drive through both sown fields and those still waiting to be harrowed in Mr Bianchi’s pick-up. Before returning, he wants to show us the water intake, a funda­mental resource for crop growth: The water comes from the Naviglio Grande, a 50km long canal which carries water of the Ticino from the foothills of the Alps to Pavia. It crosses the lands of the irri­ga­tion consor­tium, over which he presides, and is then distrib­uted through several canals to his farm­land. 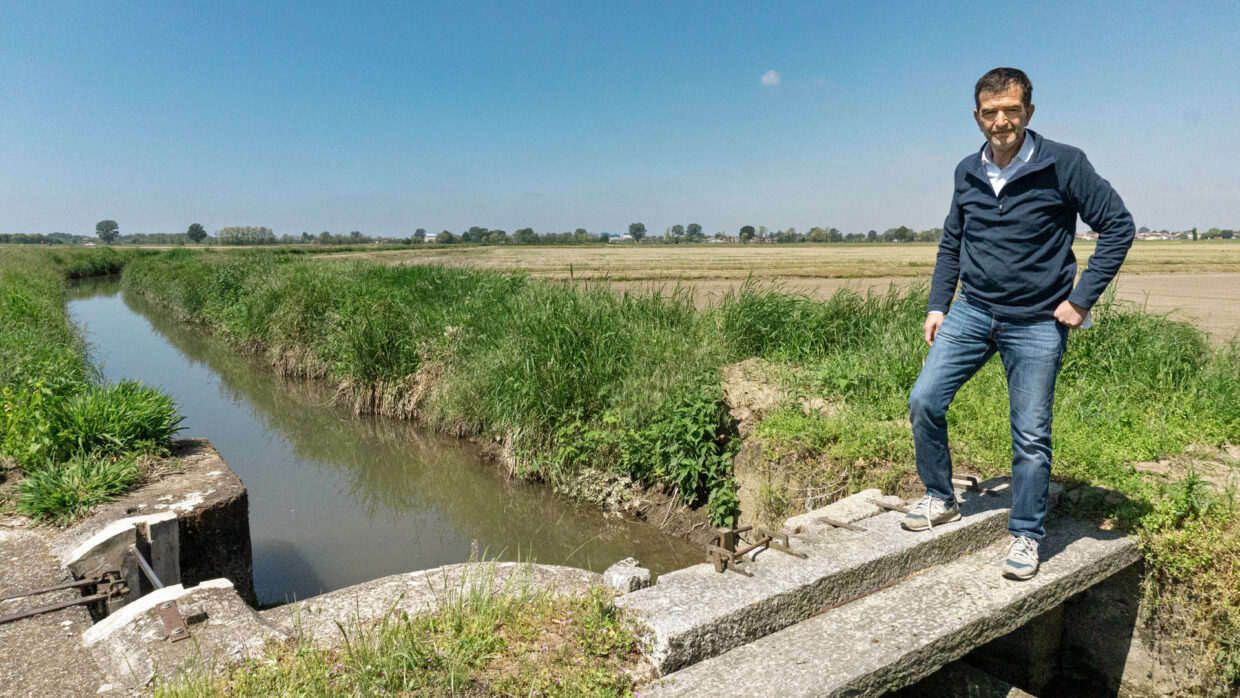 Rice grower Luigi Bianchi at the Naviglio Grande channel; from this point onwards, the water irri­gates his own fields.

On top of the many chal­lenges facing the Euro­pean rice cham­pion, water scarcity is also an issue. “Water is vital for our sector,” says Mr Bianchi: Rice is a flooded crop requiring huge amounts of ‘blue gold’ to grow. “Water preser­va­tion is an issue that is becoming more impor­tant every day. Opti­mising manage­ment of the Alpine and pre-alpine basins, which feed the lakes from which all our irri­ga­tion canals orig­i­nate, will be a priority for us in the years to come.”

The family-run organic farm Bio Alberti combines tradi­tional farming with modern processing tech­niques – and produces goods both for the nearby village and the global market­place.﻿